Just Like a Well-Built House, a Strong-Running, Small-Block Ford Needs a Good Foundation to Build on.

During the course of a restoration, there are hundreds of decisions to be made. Some are made up front before a single wrench is turned, while others are often made on the spur of the moment because of a great deal on a rare option or for personal changes. For Mustang Monthly's Project '66, we knew right up front this hardtop was going to be converted to a V-8 with all the correct and proper accoutrements, such as V-8 suspension, steering, and brakes. Most of the conversion fell into place easily, since these areas needed a complete restoration anyway. Instead of replacing the six-cylinder steering with new six-cylinder steering components, we simply ordered the V-8 parts instead.

The biggest problem in our quest for V-8 power was finding the 289 V-8. We scored a freebie from a fellow club member, only to have the machine shop tell us it was too worn out for another overbore. The second engine we found was a short-block, but it had been sitting so long unprotected, it was rusted up solid.

1 When we arrived at A&S Motorsports, John had our 289 block fresh from the machining operations. He had the block decked to ensure flatness, line-honed the main bearing journals, and, of course, the cylinders were bored .030 over for a fresh start. Not shown here, John also reconditioned our factory rods, shot-peened them, and installed ARP Wave-Loc rod bolts. After the machining process, John used a combination grinding stone and hand files to deburr the block and take off any sharp edges that might cause stress cracks under heavy load.

We were about to give up and order a 302 long-block from a local auto parts store when our savior came in the form of Mustang & Fords Editor Jeff Ford's '66 Ranchero. It had a California-emissions 289 under the hood, backed by a C4 trans. Best of all, Jeff was planning a 351 Windsor swap and didn't need the 289. He wanted to keep the emissions-style cylinder heads for a friend, and he wanted the C4 as well, but we could have the short-block and any pulleys, brackets, and so on.

After pulling the 289, it was disassembled and inspected-lo and behold, the block was usable. We finally had a foundation for a 289 buildup.

With a good block to work with, a plan was hatched. The 289 would receive all the modern technology we could hide inside, but it would look like a stocker on the outside. We made a wish list of modifications, such as a roller-cam conversion, forged pistons with low-friction coatings, Extrude Honed manifolds, CNC ported cylinder heads, and more. With a few calls to Comp Cams, Federal-Mogul, Power Heads, Extrude Hone, and Pony Carburetors, all our ducks were in a row to build one sweet 289.

In this first installment, the short-block is prepped and built by A&S Motorsports' John Douglas. John has been building and racing Ford engines for decades, and he knows how to make power and build a reliable engine. We were more than willing to let him wave his magic torque wrench over our pile of parts. 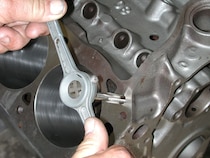 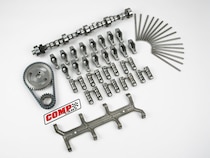 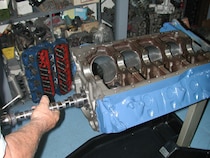 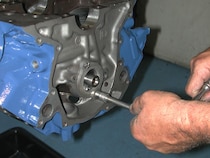 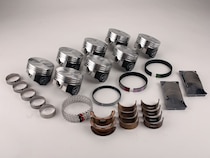 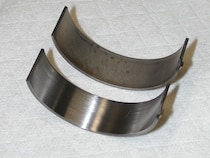