With The Right Parts, Converting to Power Steering is a Snap

Mark Houlahan Tech Editor, Mustang Monthly
February 29, 2004
Your money is going to be spent on the hydraulic parts, as converting to power steering isn't cheap. Even if you score a complete used setup from eBay for $200, most likely you'll need all new hoses, tie-rod ends, and a rebuild or reseal of the major components. If you want to purchase everything down to the last bolt, already rebuilt and ready to go, plan to write a check for around $1,500.

It would be great to hop in a time machine, go back to 1966, and purchase your Mustang exactly the way you want it. Of course, that's not possible, so owners often take small liberties during a restoration to add options and conveniences that didn't originally come with the car. Unless you have a rare Mustang or you're restoring your car to the letter of the buildsheet, adding power brakes, power steering, a console, Styled Steel wheels, and so on isn't such a bad thing. If the addition is done properly, using all the correct parts, can anyone really complain? We're talking safety and/or driving comforts here in the 21st century.

Our Project '66 hardtop is one of over several hundred thousand hardtops sold in the '65-'66 model years. There's nothing particularly rare about it and, with so many hardtops made, taking a few liberties here and there shouldn't be frowned upon. We are, after all, restoring the car and saving yet another Mustang from extinction, whether you like the modifications or not. It was decided right from the beginning the '66 would have power steering, just like the original '66 I owned 14 years ago.

1 While not 100 percent necessary, we opted for the correct-tagged steering gearbox for a V-8 with power steering because our old gearbox was shot. The steering wheel and column will need to be removed for gearbox R&R. Remove the center cap or horn ring, then remove the retaining nut and steering wheel.

The conversion to power steering is literally a bolt-on project. Approximately 90 percent of what you need to perform the conversion can be purchased new or rebuilt. The few things you might need to purchase used or find from a salvage facility include the power-steering-pump mounting bracket(s) and the hydraulic ram frame-mount bracket. Working with Metro Mustang for hard-to-find used parts, we located the correct power-steering-pump mounting bracket, the frame bracket for the ram, a pump core, and even the pulleys for the engine. We also found a good '66 power-steering center-link core at Metro Mustang, which was restored by Alamo Classic Mustang's Precision Products using a Stainless Steel Brakes Corporation control valve. We also used one of SSBC's new hydraulic slave cylinders, along with concours hoses from National Parts Depot. Last, we rang the Bramlett brothers at Mustangs Plus for the correct V-8 power-steering tie-rod ends, adjusting sleeves, and idler arm. 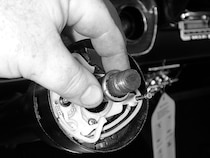 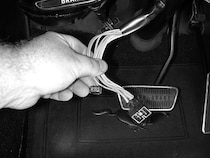 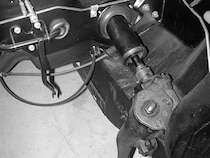 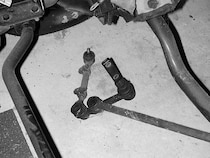 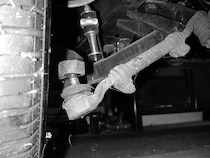 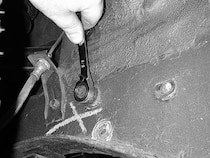 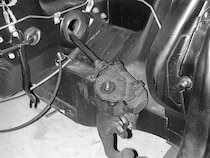 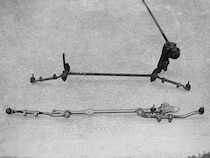 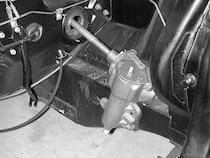