Part Of Our Deluxe Interior Conversion, A Woodgrain Steering Wheel Is A Must 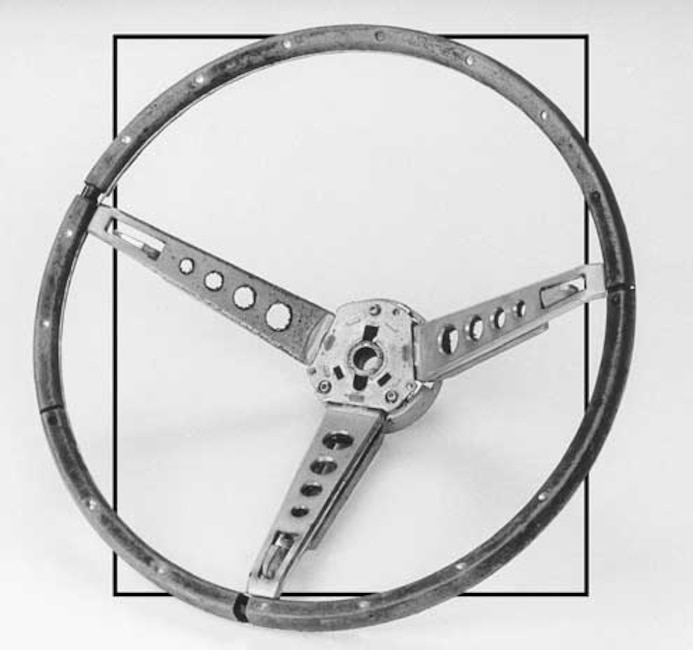 The Deluxe wheel that we found at Carlisle looked as though it had been sitting at the bottom of a lake, but the chrome was serviceable and the wheel wasn’t bent. The most important thing to look for in a good core is the condition of the center three spokes, as everything else is replaced. 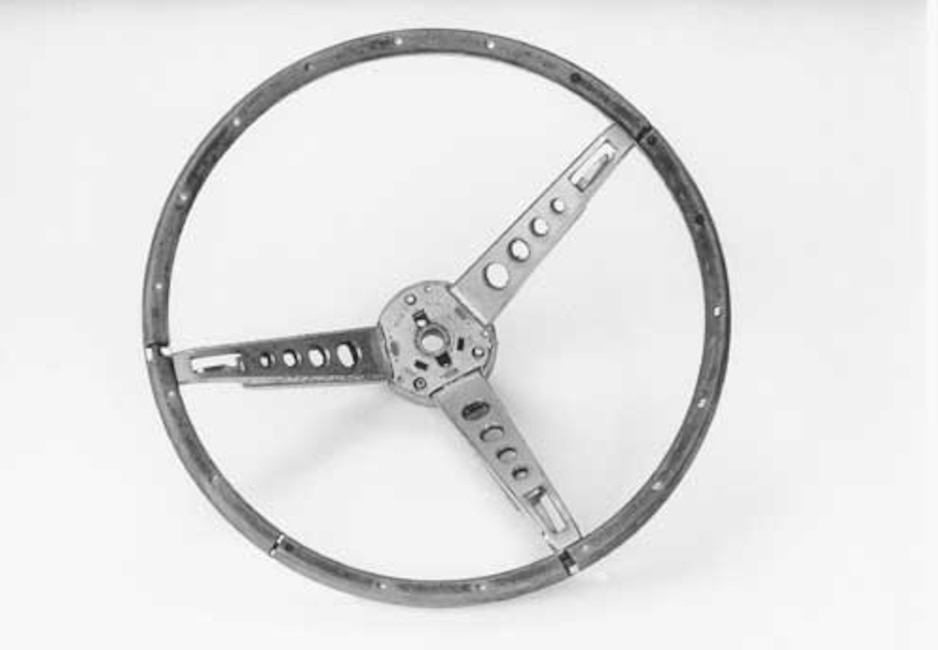 Another shot of our Deluxe wheel core shows the most common ailment of these wheels--cracking of the plastic rim. The rim usually will crack at the left spoke, according to Pete Geisler, as this is the path of direct sunlight from the driver-side window. 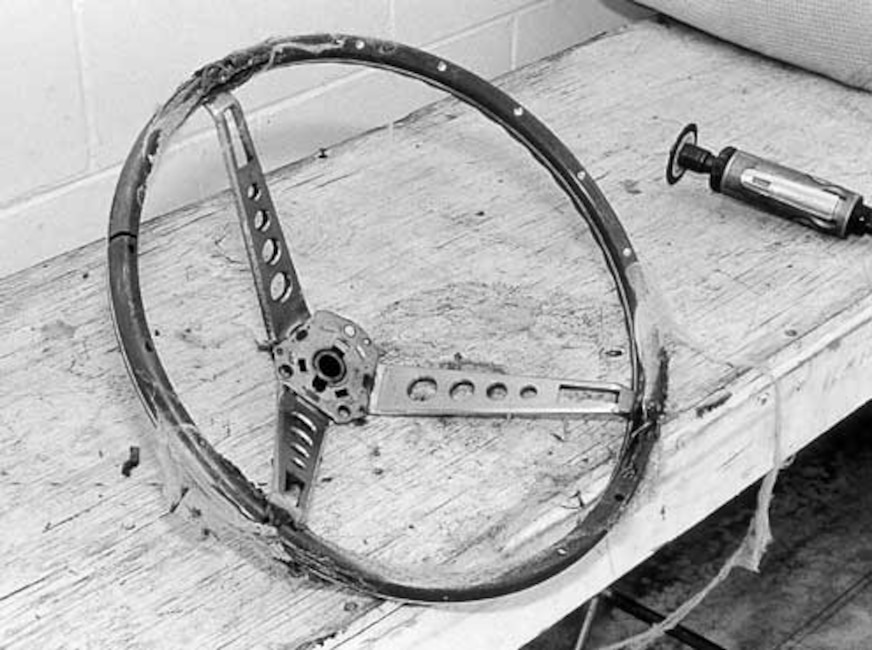 Geisler begins by cutting away the plastic rim facing at the three spokes, making it into three, more manageable pieces. The cobweb-looking stuff is what happens to the old plastic as it is cut. 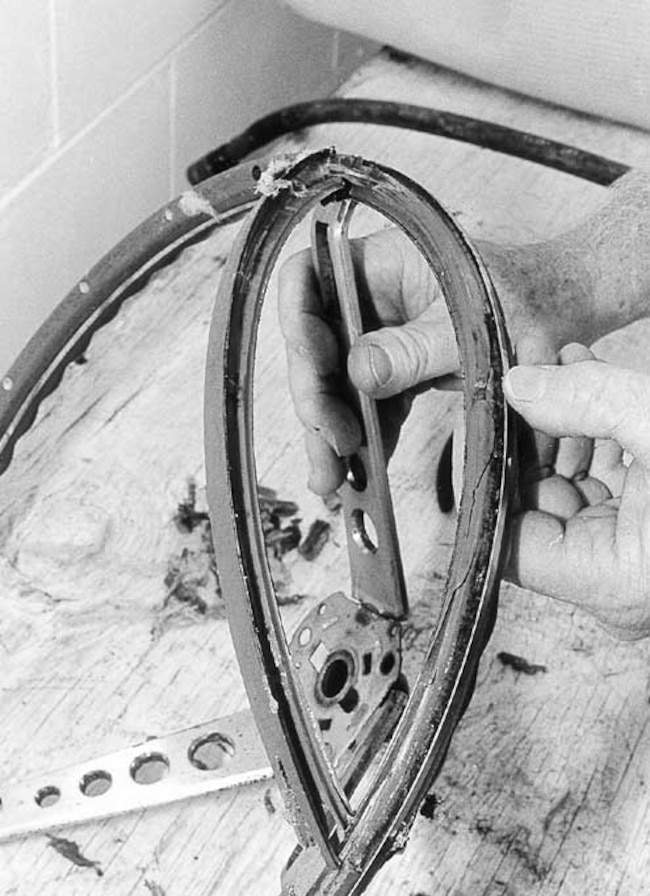 The top half of the plastic rim is now carefully pried apart from the main wheelbase plastic. These two items were bonded together at the factory, but have been known to separate after years of use. If your core is in this condition, then it won’t matter. Just make sure the spokes are in good condition. 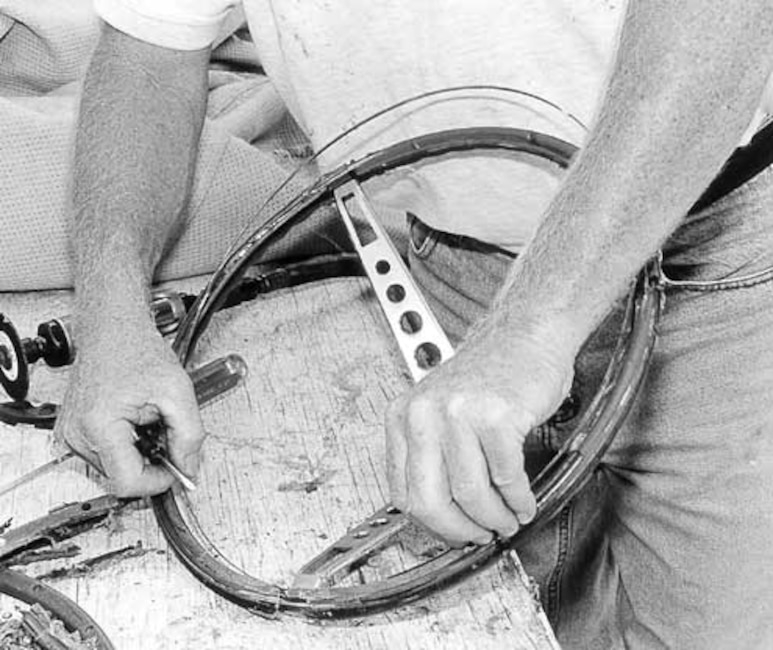 The thin chrome bands on the inside and outside circumference of the plastic grip are carefully removed. These bands won’t be reused in the restoration of the 󈨆 wheel, but Orlando Mustang uses them for other model-year wheels it restores. 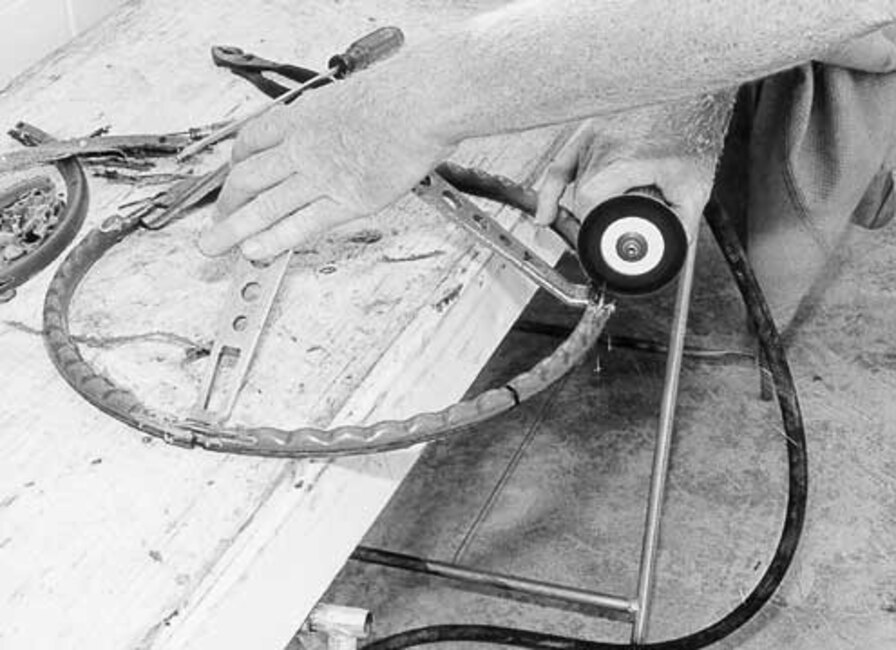 I had to turn away at this point! Even though the result is a beautiful wheel and Geisler has been restoring wheels for years, I couldn’t watch him take a cutoff wheel to this Deluxe wheel core and simply wack the rim from the spokes. 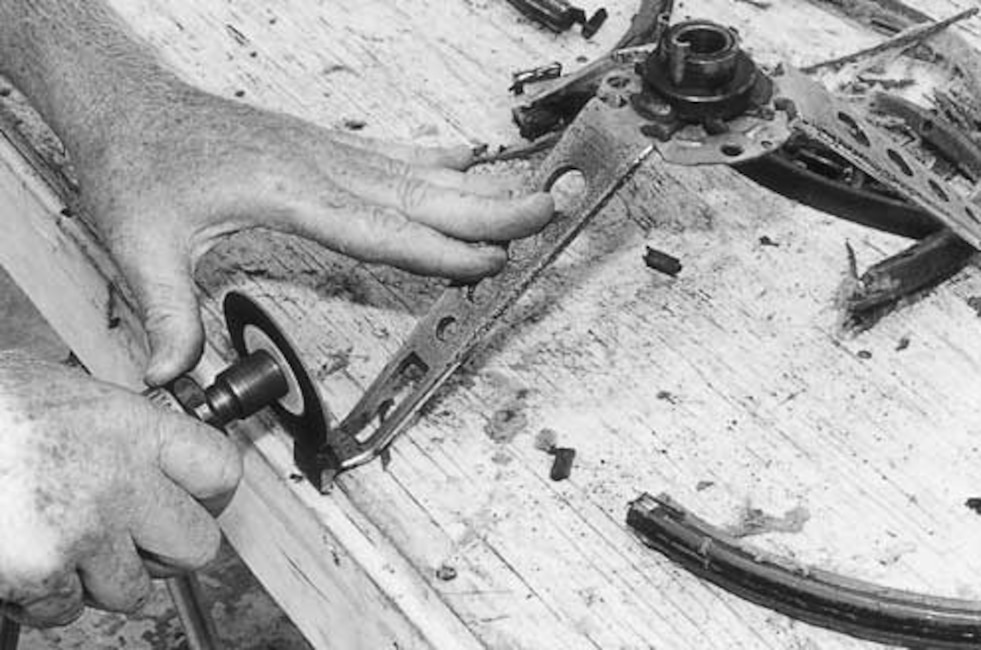 Once the rim is completely cut away from the spokes, the end of each spoke is dressed and cut to allow the fitment of the new stainless steel rim before plating. 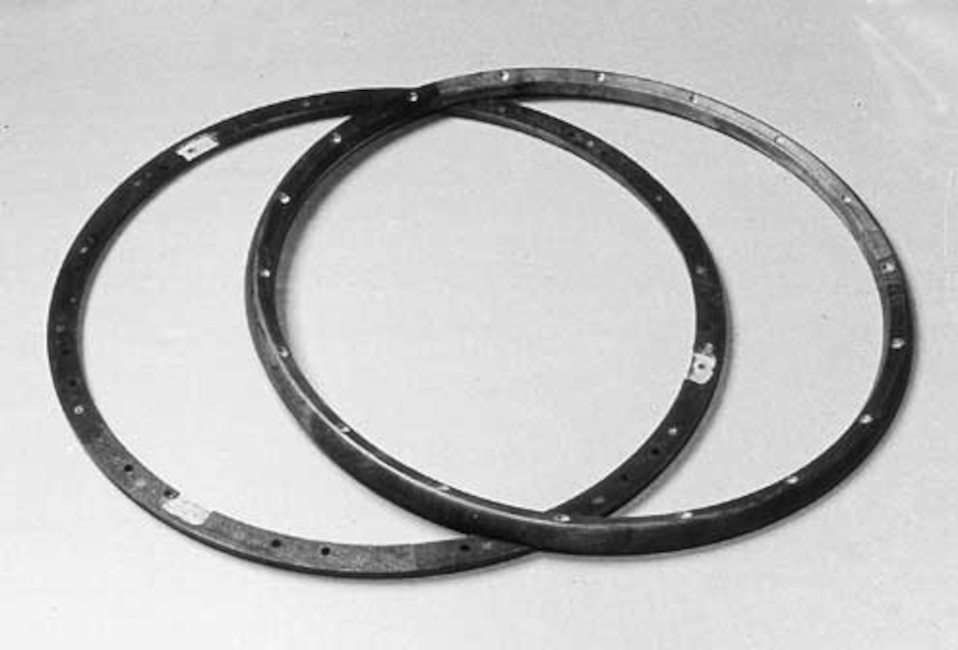 The Deluxe wheel is now sent out for chroming and some proprietary finishing processes. When the wheel came back, Geisler installed these beautiful, hand-rubbed, walnut wood rim faces to our Deluxe wheel. 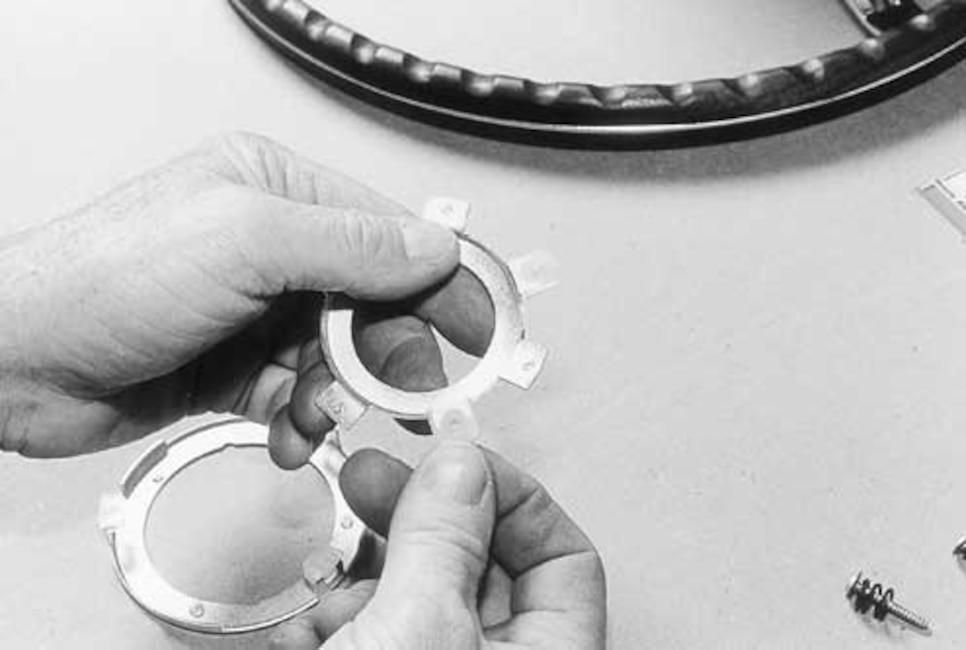 Until recently, these horn contact rings were hard-to-find N.O.S. or good used items. Orlando Classic Mustang has good used rings in stock, as well as rebuilt rings. We used the new reproduction rings from Perogie with zinc plating that Orlando Classic Mustang puts on all its horn rings. The small isolators being installed here are also from Perogie. 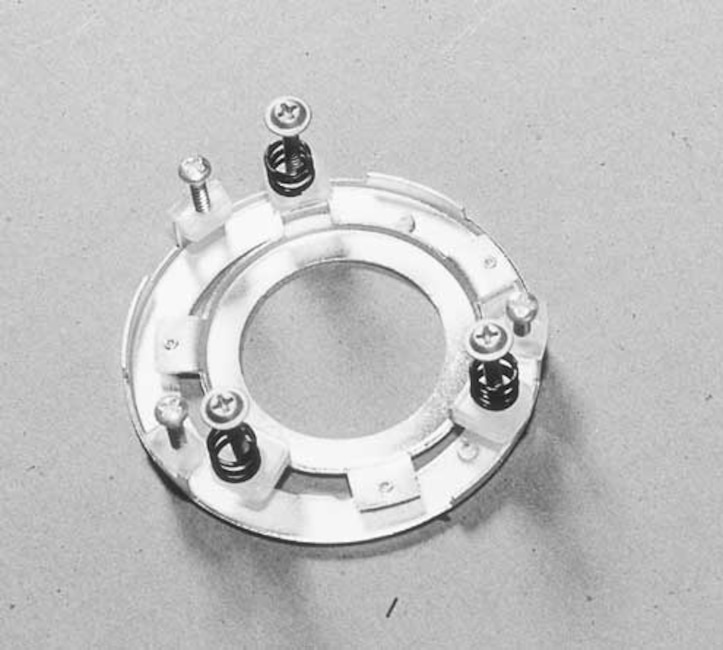 Here’s another shot of the two horn contact rings with the isolators and the screws (also from Perogie) in place, as they would be installed on our Deluxe wheel. The biggest problem with Deluxe wheels--besides the cracking rim--are poor horn contacts. 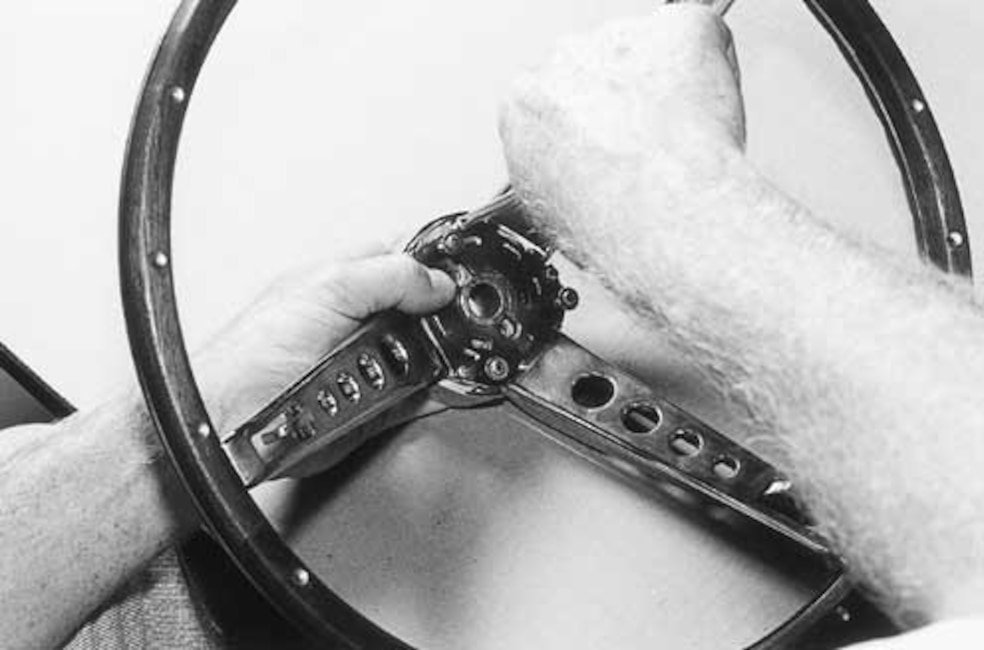 Our new horn ring and rear collar from Perogie are installed, along with the contact rings and isolators. The horn ring is a Ford OE piece, but repop is also available. 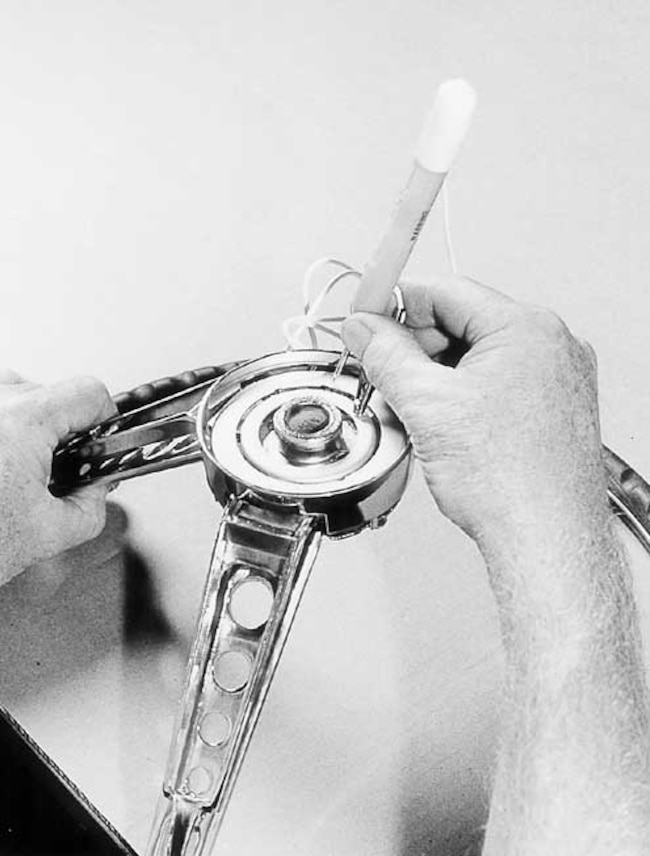 Using a continuity tester, Geisler tests for proper horn operation from all three horn spokes. Only one spoke lights up the tester when pushed. This is a common problem on most Deluxe wheels and can be easily fixed during the wheel restoration. 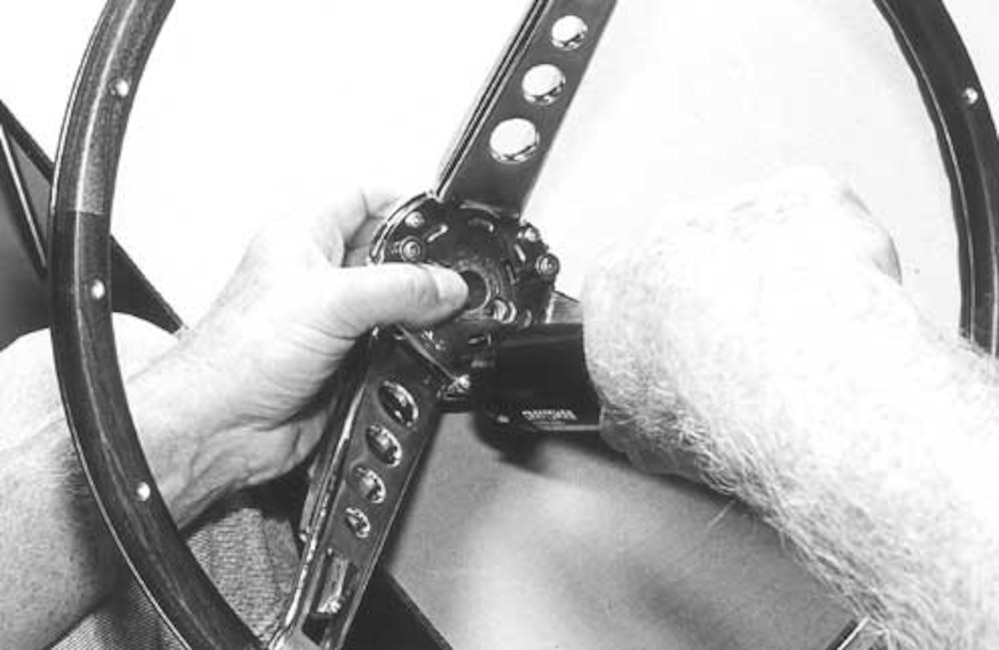 Since each wheel is slightly different, Geisler has to check each wheel with the actual horn ring that will be used for that wheel. Sometimes different contact rings will have to be used. Other times a special drill bit can be used to even-out the casting of the horn ring for better operation. Either way, the steering wheel will have to come apart several times to achieve the proper operation. 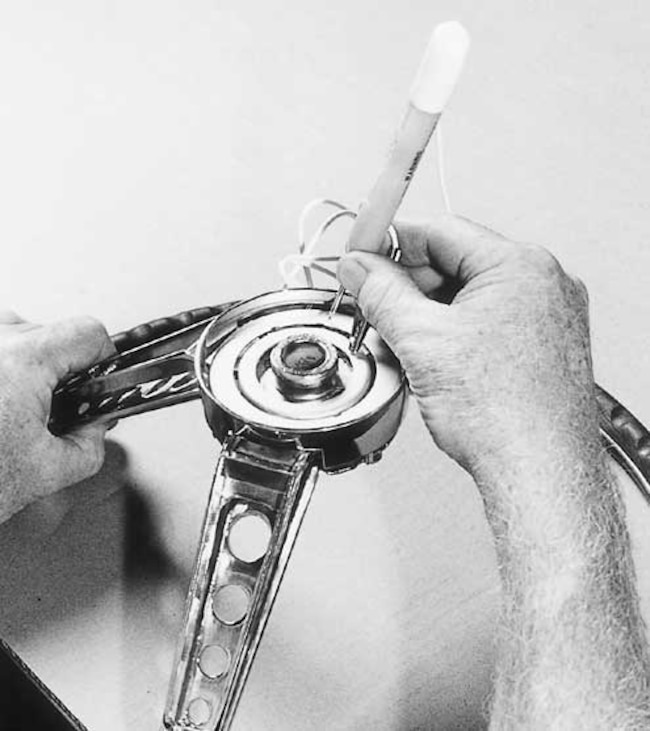 Again, the continuity tester is employed to check the horn contact rings. After three adjustments, the horn shows continuity whenever any of the three horn spokes are pushed on the horn ring. 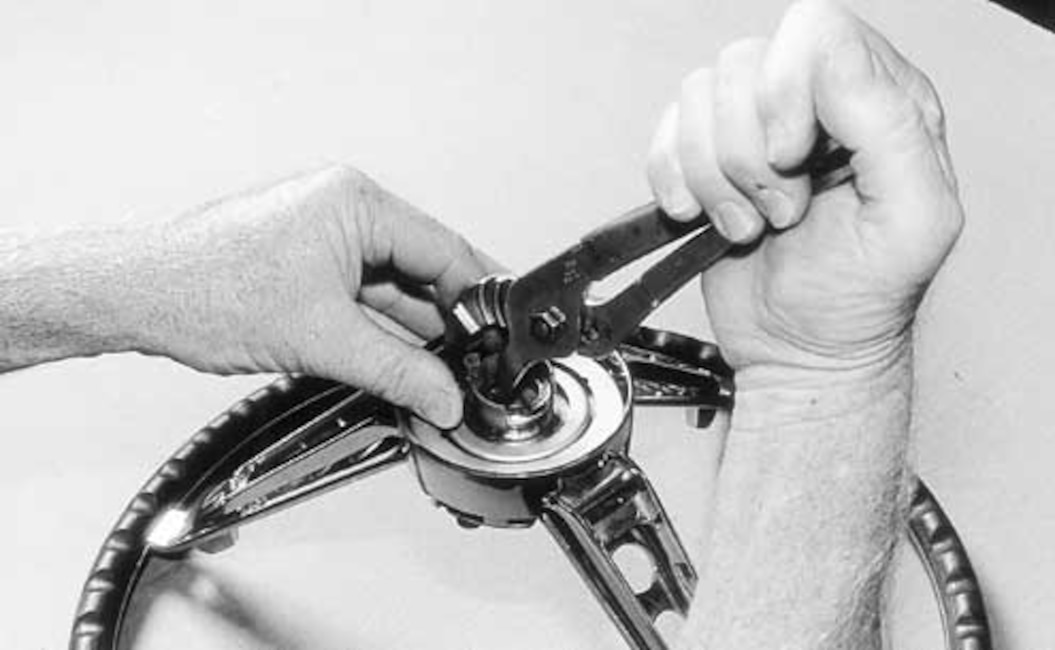 The last item to be installed on the back of the steering wheel is the turn-signal cancellation clip. This item is simply snapped on over the hub and positioned to properly cancel the turn-signal operation after a turn is completed. 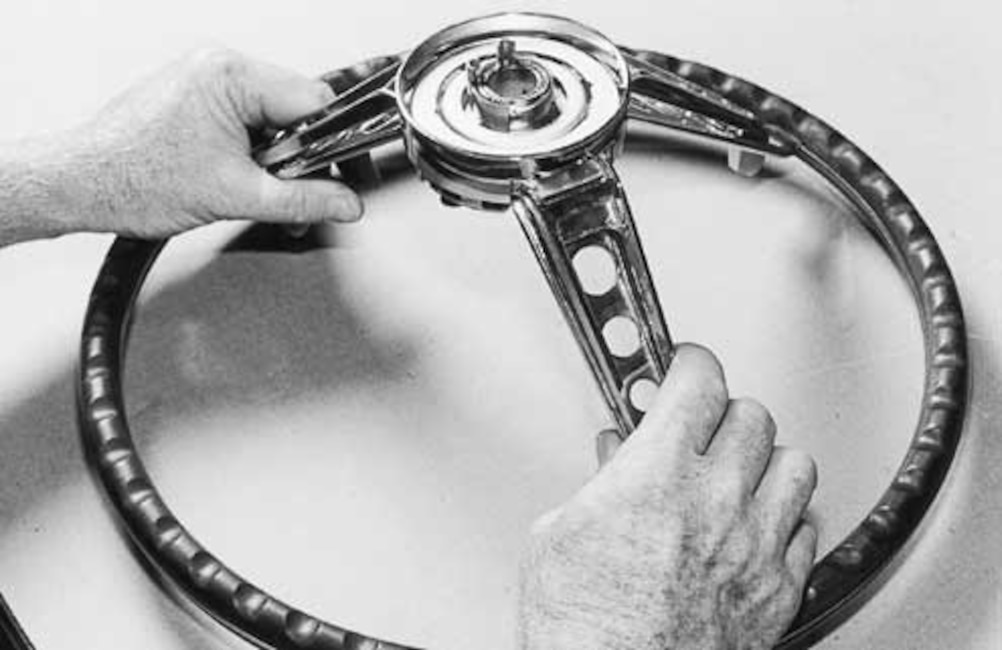 The business end of our Deluxe wheel is now complete and ready for installation. 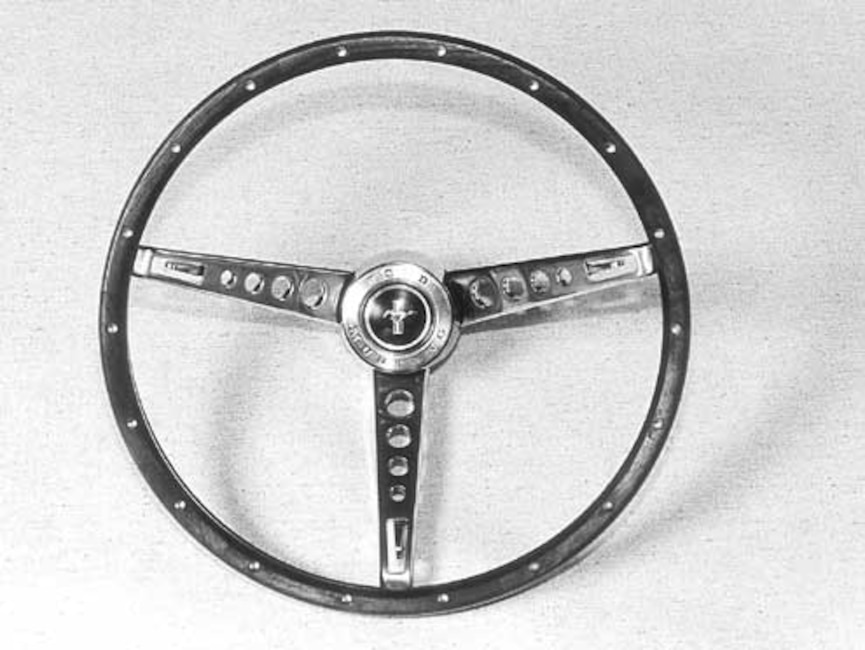 Our Deluxe wheel--complete with a new center cap from Perogie--is boxed up and will be stored until our 1966 interior project resumes, upon completion of the bodywork and the paint. Take a good look at this shot and at what we started with in our lead photo.

Walking around the Carlisle All-Ford Nationals show grounds last year, I was giddy with excitement. I had bought a '66 hardtop just three weeks prior, and I knew there were going to be certain things that I had to find while I was at Carlisle to aid in the restoration project. Since we were going to replicate my old '66 hardtop with this new project car, I knew then that it had to have a Deluxe interior, which meant a total conversion. Getting the seats re-covered--which we accomplished in the Feb. 2000 issue--and other items would be no more difficult to find than opening your favorite catalog. But the Deluxe woodgrain wheel--oh, no--that would have to be used or new old stock (N.O.S.), and N.O.S. was completely out of the question. I wasn't about to pay $900 for a steering wheel (three times the price I paid for the entire car, I might add), and then have to explain that to my wife. No, it would have to be used. If I could find a good core wheel, most of the remaining items could be ordered from just about any vendor.

After scouring the aisles and looking at several different wheels, I spotted one in a box with several other '65-'66 woodgrain wheels for the wife-friendly price of only $5! The chrome was lightly pitted, but it would make for a good core wheel.

Now that I had the wheel, all I had to do was get the rim restored and install all-new reproduction parts for the horn ring, rear collar, and center cap. Sounds easy, right? Well, for the most part, getting the reproduction parts is no harder than calling your favorite vendor--in this case, Perogie Enterprises. There are, however, two items that may prove to be hard to find if you're going it alone.

The first item is the pair of rings at the base of the wheel. These rings make contact with the horn contacts and, until now, were available only in N.O.S., or if you were lucky, they came with your used wheel. When we contacted Perogie about our Deluxe wheel restoration, we were pleased to hear that the company is now reproducing these two rings. Great! One down, one to go.

The second item that is not reproduced is the turn-signal cancellation clip. You might be able to find one of these on another wheel, but they are difficult to find.

Getting back to our core wheel, we contacted Pete Geisler at Orlando Classic Mustang about its restoration services for Deluxe wheels of all model years.

Geisler and his crew do a great job of restoring Deluxe wheels, and they have many hard-to-find parts, such as the horn contact rings and turn-signal cancellation clip. We visited Orlando Classic Mustang as soon as our schedule allowed, so that Geisler could look at our Deluxe wheel and let us know what could be done.