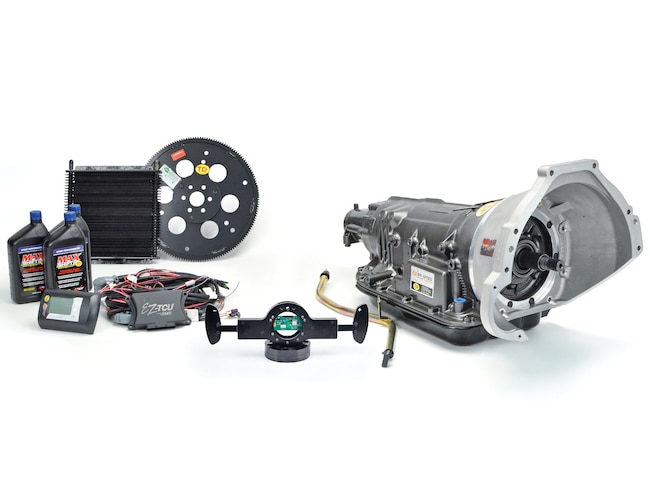 If you've been following our NMRA True Street project Repeat Offender, then you know our '85 notchback is packing a serious FRPP 427ci engine, and we fully expect it to run 9s when we're done. If you haven't caught any of the recent installments, then what you need to know is that we went with a rather unconventional transmission choice-one that you may find of particular interest if your ride is street driven and making a lot of horsepower.

One thing that you have to realize when competing in the True Street class is that the track surface gets very slippery, especially during the events where you have 60 or more cars entered. We have seen how the large majority of entrants with the same (or similar) wheelbase tear up the track surface with their street tires. All three runs are back-to-back, usually with no track prep in between, so if you have a high-powered Pony, you have to do your best to get the power down.

As much as Repeat Offender's owner is a die-hard stick guy, he realized an automatic transmission was the way to go. In most cases, an auto will hit the tires much more softly (especially compared to a street clutch), which is essential, especially when you run a drag radial. That being said, there are plenty of automatic options out there including the C4 and Powerglide transmissions, however, we wanted an overdrive transmission since Repeat Offender will be a registered and insured street car.

The TCI 6X is based off of the GM 4L80E, and yes, we know there will be purists who put up a fight, but Ford guys have been using the Powerglide for years without much fuss. Besides, if the GM guys want a good rearend, they have to use a Ford 9-inch, right? That being said, the TCI 6X is also not as budget friendly as many Mustang enthusiasts are used to, but we felt the need to try it out for you, in order to give you the lowdown.

The main feature of the 6X that attracted us was its six-speed capability. Though GM's 4L80E is merely a four-speed, the engineers at TCI have developed a new valvebody with an extra shift solenoid to work in conjunction with a transmission control unit (TCU) to provide six forward gears-only one of which is an overdrive. The main benefit is the close ratio forward gears (2.97, 2.23, 1.57, 1.18, 1.00, and 0.75), which will keep the engine in its peak power band for optimal e.t. You may recall a production car with similarly functioning automatic and manual transmissions-the '11 Mustang GT.

Another outstanding feature is its power-handling capability. "The baseline version will handle up to 850 hp, but we can custom-build one to handle 1,200 to 1,300 hp," says Scott Miller of TCI. The entry-level version was enough for us, but if you're building a twin-turbo street/strip monster, then TCI can build a 6X just for you. Other than heat-treated, high-strength components internally, combining the 6X with a TCI StreetFighter torque converter ensures its 850hp capability. "The billet front cover of the StreetFighter allows us to run a 2-inch-wide clutch versus a 3/4-inch-wide clutch on a standard converter-necessary for high horsepower applications," added Miller. 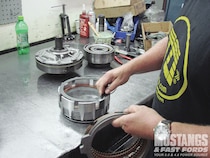 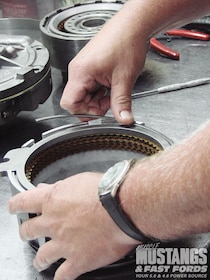 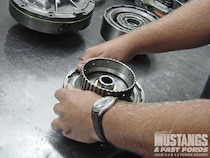 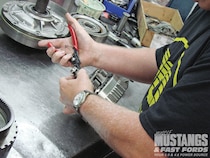 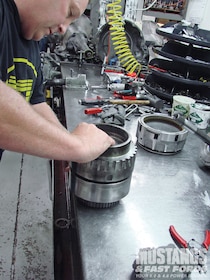 The last (and most versatile) element of the 6X is its fully electronic operation. Coupled with TCI's EZ-TCU, the 6X is capable of two modes-Performance and Economy-each of which is infinitely tunable to set shift pressures, shift firmness, and shift speed. You don't need a laptop, special software, or tuning experience either. The EZ-TCU is an out-of-the-box controller designed by TCI's sister company, Fuel Air Spark Technology (FAST). FAST is well known and respected in the performance world as a leader in control module technology, and you can expect the same level of quality and craftsmanship in the EZ-TCU. The handheld controller stays in the passenger compartment with the driver or passenger, enabling real-time calibrations on the chassis dyno, track, or street.

All of this doesn't come without some sacrifice, though. Besides its healthy price tag (PN 271601; $5,083), this GM-based transmission doesn't just slip right into your fast Ford's trans tunnel. We had to recruit Pro Fab Performance to custom-build a transmission crossmember. We also had a problem with the collectors hitting the transmission pan-we're using long-tubes with big 2-inch primaries. Finally, we contracted Axle Exchange to build us a custom driveshaft. Overall, these aren't huge concerns but if you just want plug-and-play, this isn't the trans for you.

This month, follow along to see some of the internal components that make up the 6X. We'll also show you some of the accessories we chose, and explain how they are going to help propel our coupe to 9-second e.t.'s, all while maintaining trouble-free driveability.

Next month, we'll put the finishing touches on Project Repeat Offender and get it on the chassis dyno. We're going to install the cooling and ignition systems, mount our custom driveshaft and trans mount, and install some new gauges. Then we'll show you how to tune the 6X on our Dynojet chassis dyno before taking the Offender on its maiden street voyage.