Project Leave It to Clevor Makes Its Dragstrip Debut 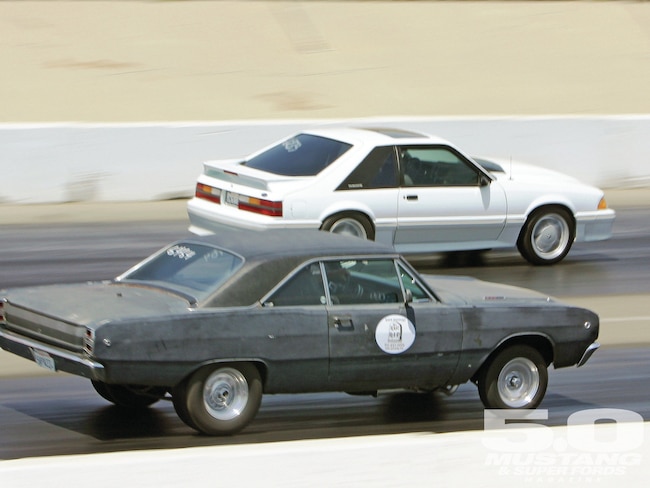 Many of you know there are still a few work-in-progress Mustangs in our fleet (Editor Steve Turner's Fox 500, Tech Editor KJ Jones' Boss 340, and Associate Editor Michael Johnson's Project Roadkill). And, contrary to what might be consensus thought, we still plan on getting those 'Stangs completed sometime before the next millennium gets here.

However, while those Ponies toil on the back burner, there are cars in the 5.0 Mustang & Super Fords project-car stable that we're able to work with and report about on a semi-regular basis. Greg Montoya's '89 Mustang GT joins Project Vapor Trail, Project T-top Coupe, and Project Coyote Cobra as an active member of the stable, and one that we've really enjoyed covering. And, as is the case for most of our project cars, the engine in Greg's 'Stang is its featured component. 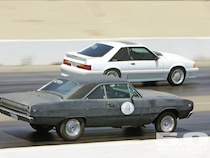 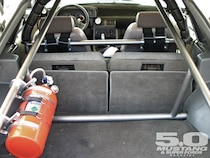 We've followed the progress of the Trick Flow Cleveland-headed (and intake'd) 408 Clevor engine in Greg's Pony for the last year, bringing you details on all of the parts that comprise the unique bullet, the ins and outs of installing one in a Fox-body 'Stang, and in our last report, rear-wheel horsepower and torque values for the Coast High Performance-built engine ("Big-Steam Dream," Nov. '11, p. 78).

A late-model Mustang's dragstrip performance is just as important as its dyno showing, and when all the stars are aligned, a perfect pass (optimum weather, traction, tune, etc) allows us to physically experience the power where the rubber meets the track. With this being the case, it's only right that our dyno test of Greg's Pony is followed up by runs on the dragstrip that will show us how good the 'Stang's performance is in its standard configuration--17-inch Pony R wheels, drag radials, full interior, tubular K-member, coilovers, and adjustable dampeners. 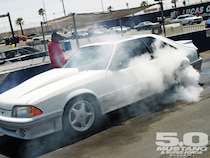 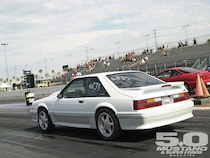 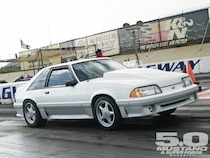 In late summer of 2011, we headed to Auto Club Dragway in Fontana, California, and made a few rips--naturally aspirated and with Greg's thumb mashing down on a 200-shot of nitrous oxide. While several things were learned in the session--including the exposure of serious rear-suspension inefficiencies that Greg plans on correcting--we left Fontana with quarter-mile confirmation that our project 408 Clevor engine indeed is the real deal, as once again, the scoreboard's mile-an-hour displays left everyone on the property amazed at how much steam Greg's docile-looking 'Stang actually makes.

Horse Sense: "What's your price (for Project Leave It to Clevor)? Tell me how much you want for this car...right now!" That's the question Greg Montoya was asked by one impressed spectator after blasting off a string of 7.18-7.20 e.t./104.94 to 105.25-mph (1.78 60-foot) passes at Irwindale Dragway in the dragstrip debut of the Cleveland-headed 408 engine we've covered from its inception to present. Unlike quarter-mile tracks, speed/mph (as opposed to e.t.) is king on the eighth-mile at "The 'Dale," which typically draws more than 200 registered, insured, honest-to-goodness street cars (the bulk of them imports and Brand-X cars that can barely muster 90 mph) for its Thursday-night grudge program. 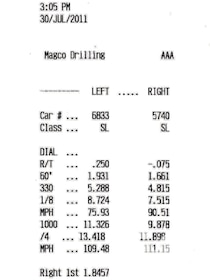 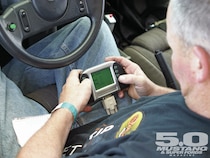 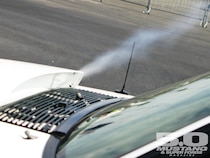 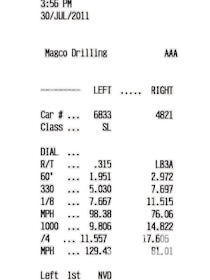 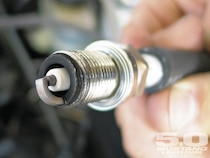 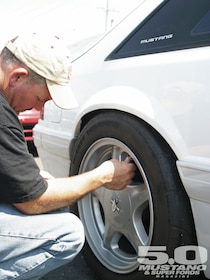 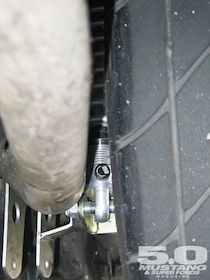 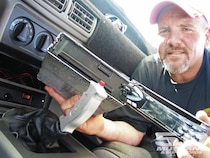 While it was clear early in this outing that Project Leave It to Clevor would not be setting any personal-best e.t.'s, we truly wanted to push speed beyond the 130-mph mark before calling it a session. Remember, the mile-per-hour information on a timeslip represents an engine's power-and-torque performance. The 408 Clevor generates more than 600 horses and just as many pound-feet of torque when influenced by the nitrous hit, and scoring the 132.46 mph proves our unique project engine is legit on the quarter-mile. Based on the data gathered in this test and the numbers from Greg's eighth-mile test at Irwindale (which actually was more successful than this effort), we believe the project Pony probably is capable of pulling 60-foot times that are in the low 1.60s/high 1.50s. Of course, our estimate is made with the assumption that the car will be wearing lightweight wheels and slicks, and that chassis nuances experienced in this test are corrected by the time Greg hits the track again. All in all, when the aforementioned stars do align, we believe the 'Stang is plenty capable of running anywhere in the 10.20s to 9.90s range, with speed of 135 mph--quick and fast for a street-driven Fox.