Back in Part 1 of Large and In Charge, we subjected our wrecking yard 460 Ford to a few mild modifications. Rather than go hog wild, we installed the upgrades one at a time to illustrate the gains offered by each. Some of the performance products netted impressive results, some less than expected. This is why we often go to the trouble of testing, as you never know what the combination will respond to.

In Part 1, we improved the power output of our boneyard Blue Oval 460 from 349 hp and 492 lb-ft of torque to 437 hp and 507 lb-ft of torque. This was accomplished by improving the heads, cam, and induction, though it should be stressed that every effort was made to keep the combination mild and streetable. With more than 500 lb-ft of torque, this was one seriously torquey motor, but the 437 hp would make an impressive street performer as well. Toss in the near-stock idle quality and you have the makings of one heck of a daily driver. The problem is that for many, 437 hp just isn’t quite enough, especially from a big-block. That is why we stepped things up in Part 2 and took our 460 from mild to wild.

Making big power with a big motor isn’t terribly difficult. All you have to do is concentrate on getting air into and out of the motor. This means you should concentrate on the heads, cam, and induction system, just as we did in Part 1. The difference between the build up in Part 1 and this adventure in Part 2 is simply a matter of degrees. Where our focus was on a mild street application in Part 1, we stepped things up in Part 2 to include motivation for a serious street/strip machine.

The success of any buildup is often a function of setting specific goals. One such goal is a well-defined power output. If you only need 400 hp to meet your performance criteria, there is no need to build something that makes 1,000 hp. Within that power goal are variables like driveability, or more accurately how much driveability are you willing to sacrifice in your quest for power? In most cases, power output and driveability are mutually exclusive or, at the very least, at odds with one another. Cam timing is a major contributor to driveability, followed by the induction system and, to a lesser extent, cylinder head configuration. It all comes down to where in the rev range you’re looking to maximize power production.

For this buildup, we decided on a realistic power goal of 600 hp. A nice round number to be sure, but even more impressive given the fact that we elected to stick with the production iron cylinder heads. Sure, aluminum heads are plentiful for the big-block Fords (something we’ll take full advantage of in Part 3), but we decided that we would reach said 600hp goal by porting the stock heads.

To that end, we shipped them out to the 460 Ford experts at MPG heads, in Englewood, Colorado. Having successfully raced Fords (including stock-headed versions) for the last 30 years or so, MPG was eminently qualified to port our ’68 castings.

Once MPG had worked its CNC magic, the head flow jumped to nearly 340 cfm on the intake. We also took advantage of MPG’s offer to run a set of its exhaust port plates. According to MPG, the port plates greatly improved the flow rate of the notoriously weak exhaust ports past 0.400-inch lift. Where the flow rate of the stock ports stagnated around 0.400 lift, the airflow continued to climb past 0.600 lift with the port plates. The heads were also treated to Cobra Jet-sized valves (2.25/1.75), a performance valve job and a valvespring upgrade (135/335 pounds) designed to work with the flat-tappet cam supplied by Cam Research. 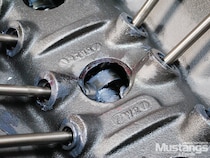 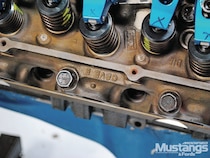 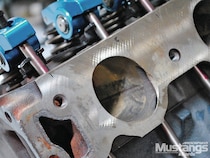 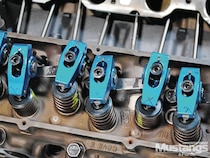 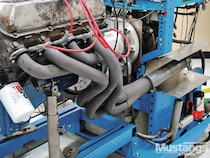 To prepare for the MPG heads, the short-block was sent to L&R Automotive for some minor machine work. Having been previously bored 0.060 over, the 460 block was treated to a quick hone to provide a fresh sealing surface for the new aluminum slugs. We elected to replace the factory dished pistons with a set of forged flat-tops from Probe Racing. The forged slugs not only improved the strength of the rotating assembly, but also increased the static compression ratio up to around 11.0:1. When it comes to performance, more compression equals more power.

The forged pistons were combined with the stock rods and crank, though the rods received new ARP rod bolts. Naturally, new rings and bearings were employed, as was a fresh set of Fel Pro head gaskets. Originally, we wanted to run ARP head bolts or studs, but time constraints forced us to reuse the stock head bolts.

To further power production, the revised long-block was teamed with a new solid flat-tappet cam from Cam Research. The healthy cam featured 0.638-inch lift, a 264/268-degree duration split (at 0.050) and a 110-degree lobe separation angle. Basically, we told the guys at MPG and Cam Research that we were looking to reach 600 hp and they gave us their 600hp (flat-tappet) cam and head package.

With our cam and heads ready to go, we turned our attention to the induction system. The stock intake was obviously not going to get us there, nor was the Weiand dual-plane intake used in Part 1. Knowing we were looking for power production higher in the rev range, we chose to top the 460 with a suitable single-plane intake pirated from a 514 crate motor from Ford Racing (PN M9424-H429).

The Victor-style intake was designed for high-rpm applications and features a 4500 (Dominator) carburetor flange. We think the motor would perform nearly as well with an intake equipped with a 4150 carburetor, but the Holley Ultra Dominator used for testing sure looked cool. If anything, it looked a little out of place next to the junkyard valve covers and unpainted cylinder heads.

A quick coat of paint would do wonders, but we were anxious to get the motor on the dyno. Additional components employed on the big-block included a set of 2.125-inch Hooker Super Comp headers (early Mustang chassis), a set of 1.73:1 aluminum roller rockers, and a factory electronic distributor. The final touches included a mechanical water pump, Lucas oil (both break-in and synthetic), and a quality K&N oil filter.

Unlike the previous buildup, we didn’t run each component individually, as the heads, cam, and intake were designed from the get go to work as a team. For this dyno test, we simply assembled the motor and plopped it on the dyno. Given the new rings, bearings, and (especially) the new flat-tappet cam, we subjected the motor to a delicate break-in procedure that included keeping the revs above 2,200 rpm for nearly 30 minutes.

Prior to assembly, the cam was liberally coated with moly-based assembly lube. To this precaution, we tossed in a bottle of high-zinc break-in lubricant from Lucas Oil and followed that up with high-zinc break-in oil. The final touch was that the cam was treated to a break-in procedure by Cam Research on its proprietary break-in fixture prior to shipping (a good idea these days with flat-tappet cams combined with elevated valve spring pressures). While this might seem a tad overkill, the flat-tappet cam survived the ordeal and performed flawlessly.

Once broken in, we dialed in the jetting and timing to the tune of 609 hp at 6,300 rpm and 557 lb-ft at 5,000 rpm. Though tuned for the top of the rev range, this combination offered more than 500 lb-ft from 3,800 rpm to 6,400 rpm. It was high fives all around after seeing the 460 thump out more than 600 hp with the stock iron headsI guess those MPG and Cam Research Corp boys know a thing or two about Ford performance after all!