Part 2 of our Twin-turbo Coyote project 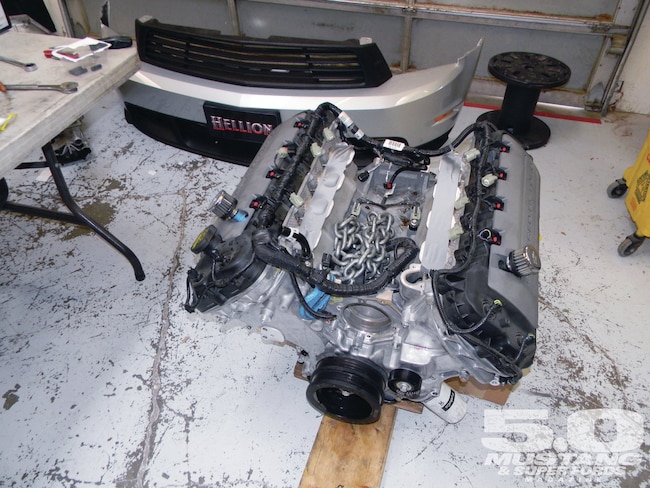 Every performance era sets its own standard for the it horsepower level. Back in the Fox era, having a 400hp 'Stang was the goal of every red-blooded 5.0 Mustang fan. Slowly that number edged up to 500, then 600. As the factory engines have improved and supercharging arrived at the OEM level, the number that it takes to impress jaded performance fans keeps going up. These days you can buy a stock Mustang that puts down 600 at the tire. When the factory is doing it, that means the number it takes to turn heads at cruise night is bound to go up. At some point you are just spinning tires, but we can't help but be impressed with the way that modern Mustangs can churn out massive power without giving up much in the way of driveability or creature comforts.

This was quite evident as we first covered Hellion's new Eliminator twin-turbo system for '11-'13 GTs and Bosses ("Double Steam," Aug. '12. p. 56). When the kit was installed on a stock Coyote with no more than larger fuel injectors and a Blow-by Racing tune, the two turbos almost doubled the rear-wheel output of Hellion's big-impeller John Urist's '12 GT. Despite these huge gains, the addition of turbos didn't prevent John from driving the car cross-country and pulling down impressive fuel mileage.

As massive as those gains were, John couldn't help but wonder how a Coyote would respond with better internals, more fuel, and, of course, more boost. To that end, he ordered up a Ford Racing Performance Parts Aluminator crate engine, crafted his own return-style fuel system, and in just two dyno pulls put the car in the same rarified horsepower realm as one of his championship race cars. "Of all the projects we've done over the years, this has to be the most docile 1,200 hp we've ever made," John explained. We know you've skipped ahead to the peak numbers by now, but if you want to see how it was achieved, check out the captions.

Horse Sense: Hellion doesn't just produce turbo systems for the latest 5.0s. The company got its start producing kits for pushrod 5.0s, and it still offers the Heat kit for '79-'93 5.0s. This $3,995 kit requires no cutting and will take your Fox 5.0 from stock to 850 hp if it has the supporting cast to go there. 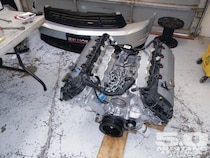 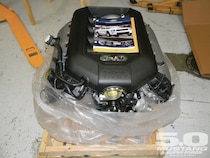 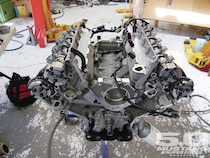 After all these years, it's rare that we're taken aback by a performance upgrade, but when a completely streetable car lays down over 1,200 hp at the tire, it's stunning. To put it in perspective, John says his street car is producing more power and running more boost than his '03 Super Street championship Mustang. Yes, that's as much power as a 7-second race car. Those sorts of results certainly gave us better direction regarding the combo for our next project car.

As impressed as we were by nearly doubling the Coyote's power with gains of 344.76 hp and 275.60 lb-ft in our first installment, this time around, with a built engine and the boost turned up to 23.9 psi via the Turbosmart eBoost controller, the gains surged to 526.91 hp and 448.07 lb-ft of torque. That area under the cover is more rear-wheel horsepower than any factory Mustangs, short of the recent Shelby GT500s, produce in total.

It's important to note that some people are confused by our charts. Everyone likes the graphs. They are simple, to the point, and include every data point on the curve. The charts are limited to specific rpm increments, so they don't show every possible data point. Thus they may leave out the absolute peak numbers if they don't fall at one of the specified rpm increments. We run both to give you a more complete picture of the changes in power and torque. Everyone loves the peak numbers, but it's the gains throughout the powerband that make your car faster. But any way you slice it, one thing is clear--the Hellion Eliminator system and an Aluminator are a force to be reckoned with. 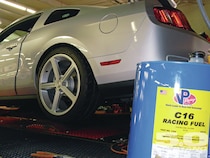 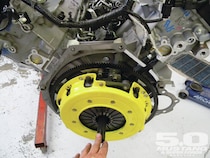 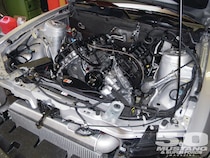 Last we saw John Urist's '12 GT on the Dynojet at Dyno Edge in Albuquerque, New Mexico, it was producing almost double the factory flywheel horsepower rating at the rear wheels. That feat was achieved with only 8.5 pounds of boost and near the outer limits of the stock fuel system. Likewise, the last time we tested the Hellion '12 GT it was running everyday 93-octane street fuel. In the interest of safety, John stepped up to VP's C16 116-octane race fuel to ward off any chance of detonation. If you were impressed by our gains from combining the Hellion kit and a stock Coyote, you'll be blown away by the fusion of the same kit with an Aluminator and a fuel system. Turning up the boost yielded the horsepower Valhalla of four-digit numbers.