Lethal Performance takes its New Shelby right to the mod buffet and into the 9-second Zone. 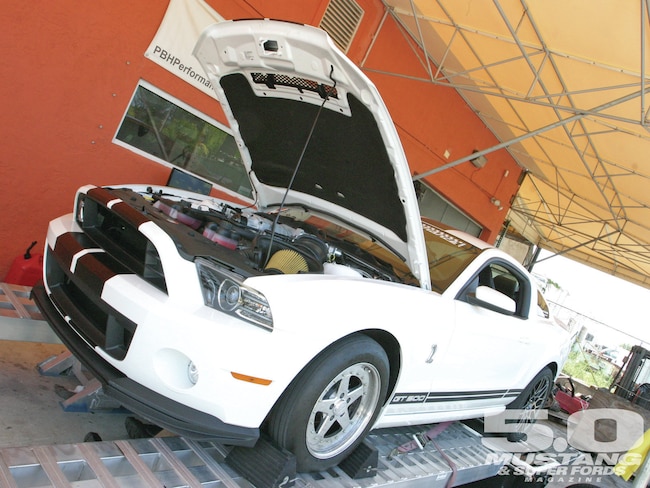 From the minute we heard about the '13 Shelby GT500, we've wanted to own one. However, that hasn't happened just yet. Maybe one day we'll put one in the driveway, but for now it helps to have friends that are ready to buy one right away and tear right into it.

Enter our friends at Lethal Performance. Jared Rosen and crew have set a standard for buying the latest hot Mustang and pushing its performance to untold levels just hours after they take delivery. No matter how rare the car is, Team Lethal is not shy about modding it for crazy power. Just hours after bringing home this '13 Shelby GT500, Jared texted us a photo of a drill plunging through the trunk floor to make way for a nitrous line. Yeah, they aren't shy.

"While some are content with how the car comes from the factory, we're not. I'd say that the majority of our customers are the same way as well," Jared explained. "All we want is more. Think of it as leading the way for the rest of the community. Someone has to do it, so why not us? (Yes, we also touched hot stoves and played with electrical outlets when we were kids.)"

While with prior cars the mission was to take the car to the ultimate performance on the dragstrip, the goal with this one is to make big power and run great e.t.'s without giving up all the car's streetability. Of course, most of us start out with that mission and end up going too far, but at least at the beginning that's the goal. 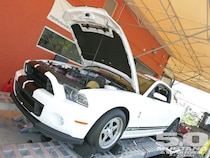 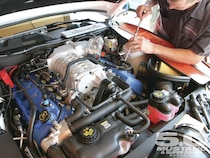 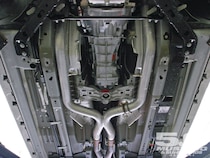 "We're committed to keeping the car streetable for now, as we really enjoy how well this car drives. However, in our quest for more power and speed, that usually gets lost in the mix," Jared confessed. "I really prefer not to put a spooled rear or cage in this car, but as you've seen with our other projects, that could change at any point."

As such, it makes sense to start with the basic bolt-ons to document what they will do for the car. Of course, that didn't stop Lethal from taking a short nitrous detour to put the car in the 10.00s before coming back to wrap up our bolt-on documentation. With that fun out of the way, we got down to business with Power by The Hour doing the wrenching and Lund Racing doing the tuning. We think you'll be impressed by the results.

"This car is no joke. It's unreal how much power it makes with such simple mods. We've almost gone as fast as our '10 GT500 went, and that car had way more into it than this one," Jared enthused. "The fact that we're still using the stock supercharger and we're able to run as quick as we have is amazing. I could only imagine what it will do with a big 4.0-liter Whipple on top..."

As impressive as the numbers were for this round of modifications, this is really just the beginning for Lethal's '13 GT500. Next up is that much larger supercharger and a lot more boost, so strap in. This is gonna be a fun ride.

Horse Sense: The Lethal Performance garage is full of sick cars, including a '10 GT500, a '12 Boss, and the '13 GT500 you see here. However, our favorite car in the bunch might be Jared Rosen's newly Grabber Blue '03 Cobra. The updated color on the classic Terminator is a magnetic combo. The big 4.0-liter blower underhood doesn't hurt either. Look for a story on that car in an upcoming issue. 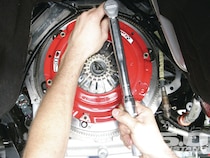 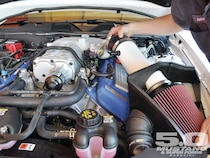 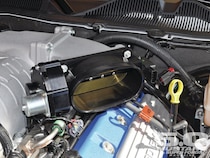 Before we wrapped up our bolt-on build, Lethal first installed a Wilson Manifolds' nitrous system on the '13. That addition put the white GT500 solidly into the 10-second zone on drag radials. After we wrapped up our testing, they hit the combination with a 100-shot; power spiked up to 832 hp and 927 lb-ft of torque at the wheels.

With this combo tuned, Team Lethal headed to the Palm Beach International Raceway in Jupiter, Florida, with Jeremy Martorella launching at 3,500 rpm and shifting at 6,900 rpm. It laid down an impressive 9.77 at 148.80 mph pass to put the car into rarified territory. This was achieved with the factory 3.31 gears, so there's still plenty of potential left with more gear.

And, lest you underestimate the potential of the latest GT500, these runs were achieved with the stock suspension. The only modification was to install smaller rear brake rotors to allow for the use of rear Bogart racing wheels with 28x10.5-inch Mickey Thompson ET Drag slicks. Of course, this is just the beginning. 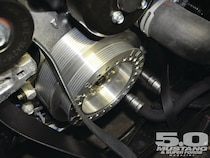 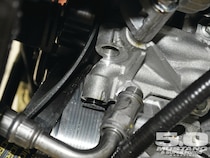 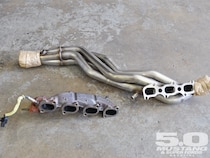 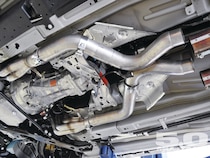 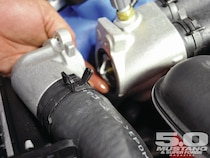 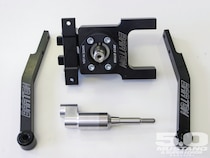 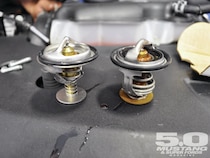 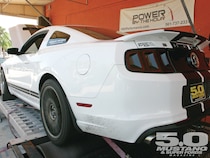 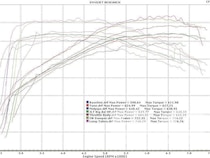 To think you could take a stock Mustang to the mid-700-rwhp level with simple bolt-ons would have been crazy just a decade ago. Today it's to be expected when your stock '13 GT500 lays down about 600 at the tire.

As you can see in this chart, each modification helped extract more and more power across the entire powerband. While the big gainers were the tuning, throttle body, and overdrive damper, it's really the sum of the parts when it comes to hot-rodding a Mustang. If you pick the right combination of parts, as Lethal did, then you can end up with triple-digit gains of 156 hp and 144 lb-ft of torque at the tire.

It's important to note that some people are confused by our charts and graphs. Everyone likes the graphs. They are simple, to the point, and include every data point on the curve. The charts are limited to specific rpm increments, so they don't show every possible data point. Thus they may leave out the absolute peak numbers if they don't fall at one of the specified rpm increments. We run both to give you a more complete picture of the changes in power and torque. Everyone loves the peak numbers, but it's the gains throughout the powerband that make your car faster.