Golden Star presents Mustang360 Week To Wicked beginning the week of July 23, when we begin the transformation of a 1967 Mustang fastback body shell into a running, driving, burnout-performing street killer. 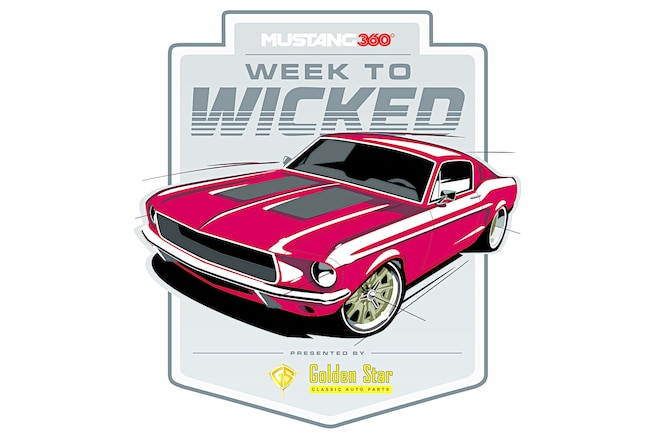 Mustang360.com has now completed two Week to Wicked projects, the first being a ground-up restoration of a 1966 Mustang hardtop in the summer of 2017, followed by a bolt-on thrash on a 2013 Mustang GT in January of 2018. But this time, we’re getting much deeper into it with a complete “from nothing” build.

Our sponsor for this Week to Wicked build is Golden Star Classic Auto Parts, which recently came out with replacement sheetmetal parts for several different vehicles, including Mustangs. One of its most popular items is a relatively economical kit to convert a Mustang hardtop into a highly desired fastback body style. So in discussions for this project, we came up with the idea of starting with a hardtop and converting it to a fastback with Golden Star’s parts, and that’s what we did. You can see that story here.

Our starting point for this latest Week To Wicked project was a “well worn” 1967 Mustang hardtop pulled from the stash of old Mustangs at PG Customs & Bodies.

With the sheetmetal conversion and paint completed, we drug a trailer to the shop that partnered with Golden Star and did the conversion, PG Customs & Bodies in Decatur, Texas, picked up the car and various parts, then took it to our tech center in Santa Ana, California where the build will take place. At this point, days before the build week, the car is essentially a bare body shell with a windshield and rear glass installed….and nothing else. No suspension. No interior. No drivetrain at all. Pretty much just sheetmetal and paint at this point.

Monday July 23, 2018 is when we will have “all hands on deck” in the shop, with a self-proposed deadline of finishing the car and doing a burnout in it by Friday night. Yeah, that’s an aggressive build schedule—you can watch our success (cross your fingers!) or failure right here on Mustang-360.com as we do daily updates of the project, plus on our Facebook (Facebook.com/mustangmonthlymag) and Instagram (@mustangmonthly) pages where we’ll be presenting live videos and further updates.

The fastback conversion with Golden Star parts was completed in about a week’s time, then the body work and paint took place. This is at PG Customs & Bodies in Decatur, Texas.

What do we have planned for the car? A LOT! For suspension, our pals at Chris Alston’s Total Control Products are providing front and rear systems, including a complete front frame rail kit that converts the front suspension to a true coil-over design and opens up the engine compartment for the engine we’re going with (more on that in a minute). The front frame rails were installed at PG Customs in Texas while the body conversion was taking place so that part is already done, but none of the other suspension parts have been installed yet—the car is currently sitting on a body dolly. During the build week, all of the Total Control suspension will be installed, including a Currie 9-inch rear end, Wilwood brakes, and an ididit steering column.

At this point you’re most likely wondering about the drivetrain we’re going to stick in this beautiful, 2018 Royal Crimson-colored (from Axalta) fastback. That would be a brand new, 2018 5.0L “Coyote” from Ford (hence why we need extra room in the engine compartment) and we’re backing it with a Gear Star automatic transmission. Once the G-Force Engineering driveshaft is hooked up, that should make for one truly wicked Mustang. E3 is providing the spark plugs to make sure the fire stays lit, and Tanks Inc. will feed it fuel. Duralast is sponsoring the build with accessories such as an alternator, starter, and a battery, and cooling will come from Be Cool and Derale. We’ll be wiring the car with a complete Painless Performance harness, and Old Air Products will keeps us comfortable with its air conditioning system.

PG’s Jerry Askey poses with our Axalta Royal Crimson 1967 fastback just before we loaded it on the trailer and headed west to our shop in California, 1,300 miles away.
The drive to and from Texas was made much more comfortable with a 2018 Ford F-150 Platinum pickup with all the bells and whistles courtesy of Ford’s media fleet. This one had the 3.5L EcoBoost twin-turbo V-6, and pulled our Jimglo aluminum trailer with the Mustang loaded just fine.

We’ll be enjoying that cool air in a complete Mustangs to Fear interior, with a whole truckload of Scott Drake reproduction parts and trim pieces, ProCar by Scat seats, and Dakota Digital gauges. Finally, and one of the last steps, we’ll be bolting on the Legendary HB Series Wheels with gold centers, to really pop with that gorgeous Royal Crimson metallic paint. Then, if the stars align and we hold our mouths just right, we’ll open the shop’s bay door and commence with the glorious burnout that signals mission accomplished!

Will we get ’er done? Of course we will! And you can be right there by our side (digitally) to watch the thrash the week of July 23rd, 2018 right here on Mustang-360.com. Make sure to check in throughout that week and see how we’re doing, and give us encouragement. We’ll need it!

Settled into its spot in our Santa Ana tech center, the Mustang and its various parts and pieces left to be installed take a pause before the madness of the build week begins July 23rd, 2018. Check in and watch our progress that week!

Week to Wicked Begins! Convert a 1967 Mustang Hardtop to a Fastback for Under $10,000!
Week To Wicked 1967 Mustang Fastback Build Coming the Week of July 23!

In 1967, the Santa Fe Railroad had a train derailment with 14 Shelby Mustangs on board; this is the story of one of them.