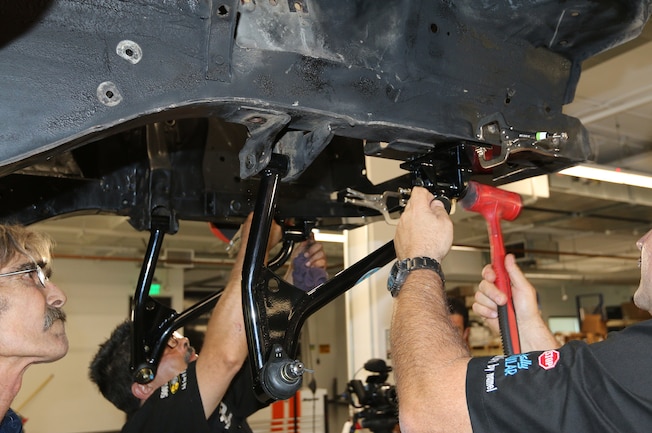 The Classic Performance Parts Week To Wicked 1966 Mustang is now fully on the road, and that road is made much more fun with the fantastic underpinnings we installed on the car. Stock 1966 Mustang suspension leaves a lot to be desired—coil springs atop the front upper control arms, a flexible unibody chassis, and the pitifully small bias ply tires of the day made the early Mustang a not-so-thrilling ride through the corners. So as the presenting sponsor of our Week To Wicked project, Classic Performance Products (CPP) installed its part number 6466PTK-2 Pro Touring suspension kit (6770PTK-2 is for 1967-1970 Mustangs).

That single part number is a complete suspension kit including tubular control arms, double-adjustable coil-over front shocks and double-adjustable rear shocks, adjustable and hollow sway bars (1 1/8-inch front, 1-inch rear), billet aluminum brackets, dropped leaf springs, high performance rear spring shackles, and all the bolts and other stuff needed to install it, including a spanner wrench for the coil-overs. A few spot welds need to be drilled out and a few holes drilled, but other than that this kit is a complete bolt-on that transforms the little Mustang into a real corner-carver.

So check out this video as Tech Editor Mark Houlahan and CPP’s Danny Nix as they show all the parts we installed on the Week To Wicked ’66 Hardtop. For more information, check out the company’s website at ClassicPerform.com.