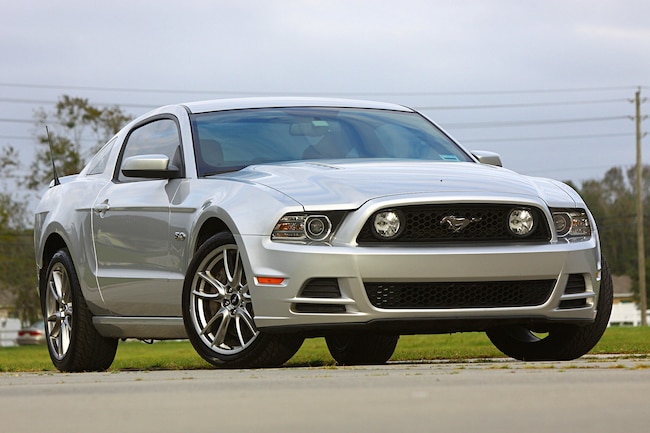 When the Coyote engine hit the streets under the hood of the 2011 Mustang GT, to Mustang fans it was like the 2003-2004 Cobra’s second coming. Great power, excellent drivability, and responsive to modifications, the Coyote engine checked all the right boxes. With 412 horsepower on tap out of the box, the Coyote engine single-handedly rendered previous modular engines useless. The rest of the Mustang world was left to play catch up. To keep up, most have chosen to join the Coyote world via engine swaps.

However, whether it’s the engine in your 2013 Mustang GT, or the Coyote engine going into your 1992 Fox coupe, replacing the oil pump gears will go a long way to ensure you enjoy plenty of smiles per miles.

For these reasons, if you plan to modify your 2011-current Mustang GT or Shelby GT500, one of the very first modifications needs to be the addition of oil pump gears. With our Continental Tire Week to Wicked 2013 Mustang GT, we knew modifications were coming so the very first thing we did was take the car to Justin Jordan at Jordan Performance and Racing in Ruskin, Florida for the addition of Ford Performance Parts oil pump gears. It seems the majority of Mustang shops now specialize in Coyote engines and performance, and Jordan has a firm grasp on what it takes to build a fast Coyote-powered Mustang. And since we purchased the car in Central Florida before sending it out west to our Santa Ana, California tech shop for the Week to Wicked build, we wanted to get the oil pump gears done before the car headed for the left coast. Therefore, it only made sense to take it to Justin for the oil pump gear swap; he has reached the point to where he can do this swap with his eyes closed, so we felt really comfortable with him doing the job.

1. When replacing oil pump gears, these are the parts you will need. If you have a shop like Jordan Performance and Racing perform the swap, be prepared to purchase these parts for the install. Obviously, you have the oil pump gears, but as you’ll see and read, you basically have to remove the front of the engine, along with the cam covers, so you want to replace the cam cover gaskets (BR3Z-6584-A, BR3Z-6584-D), timing cover gaskets (BR3Z-6020-B, BR3Z-6020-C, and BR3Z-6020-D), crankshaft seal (XW4Z-6700-B), and a water pump seal (F1VY-8507-A). Since the factory Ford balancer bolt is a torque-to-yield bolt, you will need to replace it, as well. You can either replace it with a Ford bolt (BR3Z-6A340-A) like we did, or with one from ARP 156-2502. As for the oil pump gears, we added the M-6600-50CJ unit. As previously mentioned, Ford Performance Parts now has just the gears that can be added to the stock housing.

2. Jordan Performance and Racing’s Justin Jordan gets started on our oil pump gear swap by removing the belly pan under the engine, the strut tower brace and intake manifold cover. The front of the engine has to be disassembled in order to get to the oil pump gear housing, so let the games begin.

3. Justin has removed the air intake, coolant reservoir, fan shroud, and miscellaneous hoses and lines. Notice Justin also removed the battery and battery tray. It just makes sense to remove the battery and tray to make it easier to remove the passenger side cam cover. He still has to remove the A/C belt, some front accessory items, cam covers, and front timing cover before being able to access the oil pump gears. In many cases, people cut off the A/C belt and replace it with a new one, but Justin chose to walk the belt off so we could reuse the original.

4. When doing oil pump gears in the car, you’ll spend most of your time removing parts and disconnecting wires, and moving them out of the way. Justin disconnects the fuel rail line, and the ignition coils, and then relocates various wiring harnesses to make it easier to remove the cam covers. Justin won’t remove the cam covers until he’s ready to remove the front cover. You don’t want to take the chance of anything getting into the engine.

5. With various wiring harnesses, hoses, and lines out of the way, along with removing the water pump and harmonic balancer, Justin is able to loosen and remove the front cover.

6. There’s a lot going on here so let’s go over it. First, Justin uses the factory harmonic balancer bolt to turn over the engine so he can line up the timing marks before releasing the tension on the timing chains, and removing them, along with the crank sprocket. Also, he uses a shop rag and a magnetic pickup tool is used as a backup to make sure the oil pump pickup tube bolts don’t fall into the pan. Once the pickup tube bolts are removed, push down on the tube to disconnect it from the oil pump housing. Also, Justin always uses a new O-ring on the pickup tube, as well.

7. With the oil pump gears out, Justin sets his sights on putting everything back together. The timing chain tensioners are pressed back in, and a pin placed in them so they can be reinstalled, along with the timing chain guides.

8. Upon reassembly, Justin had a couple extra pair of hands in fellow Mustang-360/Mustang Monthly tech editor Mark Houlahan, and past tech article helper, David Squire. All hands were on deck to help get the water pump, front cover, and new oil pump gears installed. The guys need to fit the front cover and water pump with the new gaskets and seals, and also trim the leftover silicone on the front cover and the engine itself.

9. There’s really no wrong way to install a Coyote oil pump. The gears inside the housing use the crankshaft to circulate oil from the pickup tube throughout the engine. Therefore, the crankshaft and the oil pump gears are keyed to each other, so it’s pretty much impossible to incorrectly install oil pump gears, especially if you’re replacing the whole housing.

12. With the new gaskets and crank seal on the front cover, Justin reinstalls it onto the engine. Don’t forget the two lower bolts that attach the front cover to the oil pan, which also serve as wiring harness provisions.

13. Dave and Mark are called into action once again to help install the new cam cover gaskets before Justin reinstalls the cam covers. Add another dab of silicone at each junction of the cylinder head and the front cover before reinstalling the cam covers. That is standard practice with every modular engine.

14. With our Week to Wicked 2013 Mustang GT Coyote looking like an engine again, Justin reinstalls the ignition coils, reattaches the fuel line to the rails, and gets the wiring harnesses back in their proper places.

15. Here’s a little tip for everyone. When we put the engine all back together, we had a leak from the upper radiator hose. Justin says this is a common problem, so if you’re either doing this yourself, or having a shop like Jordan Performance and Racing do it for you, be prepared for things like this to pop up, especially if your Mustang has a few miles on it.

16. Before we’re able to get back on the road, Justin tightens the new harmonic balancer bolt in place. Once the balancer bolt is tight, the rest of the engine’s front accessory drive and radiator hoses can be reinstalled.