How To Get a Cool Restomod Interior

Internal Wickedness: With parts from Mustangs To Fear, Scott Drake, Painless Performance, Lokar, and ProCar by Scat, we transform the interior of our 1966 Mustang hardtop from stock to trick 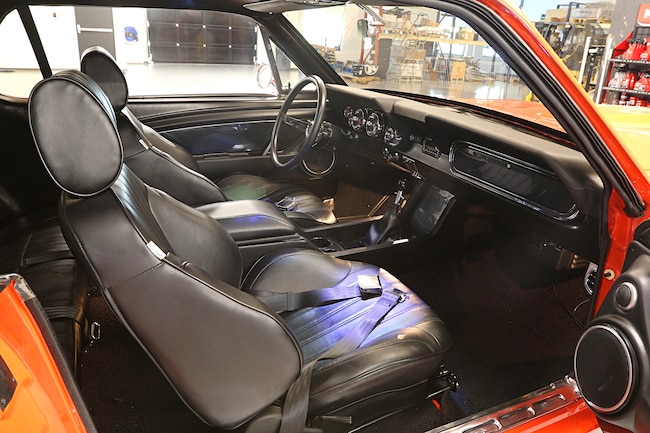 I’m sure you’ve seen our Week To Wicked project with a 1966 Mustang hardtop everywhere, including our Mustang Monthly November 2017 cover and all over our website and Facebook page. As part of our transformation, we treated the interior to a makeover. We wanted to make the inside as nice as the outside and underside, but also comfortable for us to drive cross-country. That meant new everything, from the carpet to the headliner and everything behind the dash.

To help rejuvenate the Mustang’s cabin, we turned to restoration giant Scott Drake to get many of the smaller restoration parts, such as handles, knobs, switches, and similar items. To make it both custom and comfy, Mustangs To Fear sent us their trick one-piece headliner, door panels, carbon-fiber dash gauge bezel, glove box panel, and center console. Due to the design of the MTF door panels, electric windows are a must. So Electric Life supplied their power window regulators. Finally, we bolted in a pair of ProCar Rally seats with high bolsters for extra comfort and to hold our ample backsides in place when we put the CPP suspension to the test on an autocross.

Follow along as shop tech Christian Arriero assists us (does the hard work) with the install while we shoot pictures (the easy job).

1. Here's the interior of our 1966 hardtop before and after we fixed it.

2. Mustangs To Fear makes this neat one-piece headliner for the Mustang that prevents the annoying problem of a droopy cloth headliner. It includes an upper console with two map lights and provides an inch and half or so of extra headroom, which is nice if you’re over 6-feet tall.

3. Using a piece of masking tape and a Phillips screwdriver or awl, mark the locations of the holes for the sun visors, then transfer the tape to the headliner and make small holes. Otherwise, you’ll be guessing at where the holes are after you install the headliner.

4. Because it’s easier to install when there’s no glass in the car, we began our interior project by slipping the Mustangs To Fear’s one-piece headliner through the rear window opening.

5. We used quick-disconnect terminals to wire the map lights.

6. With the headliner roughly installed, tape it to the roof rails before screwing anything into place permanently.

7. These clips are stock on Mustangs and were originally used to finish off the end of the fabric headliner at the top of the A-pillar. They now function to hold the MTF headliner in place at the corners.

8. Install the sun visors. Ours were in good shape, so we reused them.

9. The MTF headliner comes with an A-pillar and sail panel—by the rear window—trim pieces.

10. In and done, we like the MTF headliner so much we’d recommend it for any Mustang build that’s not a pure restoration.

11. The 1966 wiring is often sketchy at best, so we replaced the entire wiring harness with a Direct Fit Mustang Chassis Harness (PN: 20120) from Painless Performance. Wiring a car is not difficult, but it is time-consuming. So we did the bulk of it prior to our weeklong thrash that was Week To Wicked.

12. The stock Mustang fuse box only has a few critical circuits on it, and the Painless harness has 22 circuits, plus a new fuse box that accepts late-model-style blade fuses. We mounted it under the dash on the firewall.

13. The Painless harness uses crimp connectors, saving the hassle of soldering and shrink-wrapping every connection. Just make sure you’ve got the crimp secure.

14. Scott Drake supplied the carpet set. You can see the Dynamat sound deadener that we laid down first to keep the interior quiet and cool.

15. The carpet needs holes for the seat mounts. Get it all fit in place, then mark through the holes on the bottom side of the floorpan. Use a punch (the cleanest way) to pop the four holes in each side.

17. The metal quarter panel trim was sanded smooth, then sprayed semi-gloss black before it was reinstalled.

18. New window fuzzies for the quarter window attach to the trim panel and are held in place with weatherstrip adhesive. You could drill holes, but this is a cleaner way to do it. Just use clamps to secure it in place while the glue dries.

20. Vintage Mustangs have pretty resilient dash pads, compared to a lot of other muscle cars, but ours had a few small splits and warps in it. So we got a new one from Drake.

21. Scott Drake supplied all of the restoration parts for our interior, including seatbelts, door and window handles, rear-view mirror, and more.

22. AutoMeter supplied a set of their retro looking American Muscle Series gauges, which are perfect in an early Mustang. They feature modern white LED through-the-dial lighting and use AutoMeter’s race-proven air-core mechanism that gives quick and accurate readings. We got a six-gauge set that includes speedo, tach, voltmeter, fuel, water temp, and oil pressure. The gauges were shipped straight to Mustangs To Fear, where they installed the gauges in their carbon-fiber gauge bezel and wired them for easy installation. MTF also supplied a glove box cover plate that sticks onto the stock door.

23. Installed and easily visible through the spokes of the Scott Drake wheel, we won’t tire of staring at these gauges on long jaunts.

24. ProCar’s Rally seat is super popular in hot-rods. They look good and are comfortable to sit on with high side bolsters to hold you securely in place in the corners. So that’s what we used in our Mustang. The seats look vintage and recline and also have headrests. The upholstery on these is vinyl, but you can get them in leather, velour, or a combination of vinyl and velour. There are a lot of colors to choose from, as well. General Manager Mike Essex approves (he is 6 feet 4 1/2 inches tall as a reference). We initially installed the seats on the highest adjustment but needed to lower them a bit, which is easy with the ProCar seat tracks.

25. Mustangs To Fear’s door panels are perfect in a restomod and have built-in speakers. They require electric windows, however, as they don’t have a window-crank handle area. They also use 1967 Deluxe door handles, but stock inner mechanisms work fine. The panels are vacuum formed and vinyl wrapped, and come with a bolt-on adapter plate for the door handle mechanism. We got the carbon-fiber inserts to match the MTF gauge bezel and glove-box door cover.

26. The MTF door panels relocate the door handle regulator, so you must install this bracket.

The Mustangs To Fear door panels require power windows. So we called up Electric-Life and ordered kit number FD38-K, which fits 1964-1966 Mustangs. The kit comes with everything you need to convert both front doors to power windows, though the switches and wiring are sold separately. Installation is a piece of cake. Simply replace the manual bits with the bolt-in power conversion parts.

The Electric-Life kit for early Mustangs has everything you see. Though the switches are optional (we used PN: 4990-10-142 illuminated switches).
The window regulator installs just like stock.
The switches fit perfectly into the MTF center console.
The wires have to pass through the doorjamb. Make sure they’re protected with conduit, as we did here. As a bonus, it looks cleaner than just having wires visible.

27. A couple of screws secure the panel in place.

28. Our Mustang came without a center console, which we rectified by adding an MTF custom console to give us an armrest and cup holders. The console is made of wood and metal with real brushed aluminum trim (from Burton Antique Auto Parts). The armrest pad is covered in high-density foam, so it won’t sink under pressure and look like crap after use. A small floor lamp sits on the back side, and we got the optional window switch cutouts to operate our power windows.

29. Situate the console in place, then drill four holes for the shifter, which also serves to hold down the console.

30. We went with a Lokar shifter (PN: X70-BFMB) with an 8-inch stick and a muscle-car-style knob and handle.

31. Scat sent us new covers for the rear seat that match the Rally bucket seats, which shop technician Christian Arriero installed on the stock seat frame. The stock foam was in good shape, and we re-used it.

33. There you have it—an all new and super comfortable interior. Notice the Lokar shifter with a shorter (8-inch) handle and muscle-car adapter to give a manual trans look.