Week to Wicked: Build A Mustang In a Week!

Introducing Mustang Monthly’s Week to Wicked 1966 Mustang hardtop. Is it possible to build a complete car in a week? Yes—sort of. 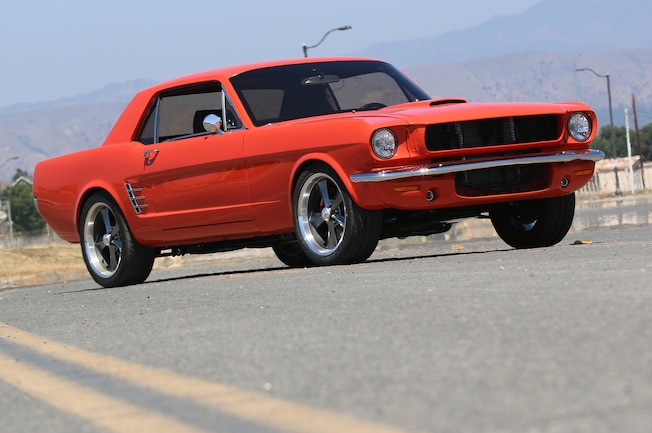 There’s a better than average chance that if you’re reading this magazine, then you’ve watched an episode of Overhaulin’ or any number of automotive enthusiast television shows, wherein they try to convince you that they built an entire car in a week. You know, they drive a rusty cob into the shop and blow it all apart, and five to seven days later, the shop door goes up and out rumbles a finished and completely transformed show car.

Yeah, right— It doesn’t usually work that way in reality. What you see on the pages here is our version of The Real World, Automotive Style.

Several of our sister titles in parent company TEN have done what are now called Week to Wicked builds, starting with a nice, but certainly not perfect, vehicle. Over the course of a week, the car is turned it into a fantastic, show-quality driver. The idea was mostly for online video purposes, but it’s also a great way to build a car within the pages of the print magazine. So that’s what we did. During the week of July 17, 2017, it was Mustang Monthly/Mustang-360.com’s turn. As we built this 1966 Mustang hardtop between a Monday morning and Saturday morning, replacing nearly everything on and in the car.

We started with a six-cylinder hardtop that we found in Southern California on Craigslist, an original owner, black-plate car that was mostly rust-free (those of you in the rustbelt are no doubt accusing us of cheating right now, but that’s one of the only perks to being a car guy living in Los Angeles—rust-free sheetmetal). It was in decent shape, but truly a 10-footer. You know, it looks great from 10 feet away, but not so great up close. Because it’s the most time-consuming part of any build, we did the body and paintwork ahead of time (read about that on page TK of this issue). Then we got a gang of sponsors onboard to help us with the project through parts and labor. Once the video cameras and lighting were set up, we rolled it into our Santa Ana (California) Tech Center at 8 a.m. on Monday, July 17, and got busy turning wrenches. By 3:00 a.m. Saturday morning (or Friday night, however you want to spin it), we were lighting the hides in the parking lot, dazzling the video cameras, and destroying the rear Maxxis tires in glorious fashion!

What you see here is the finished Mustang with all of our sponsor’s parts, shined up, and ready for its public debut in our TEN booth at the SEMA Show in November. You will see this car appear in several future issues of the magazine, as we detail the work and products that were used during the build. The plans as of this writing are also to drive this thing all over the country to the various shows and events during 2018, so you’ll have a chance to see it in person!

1. This was our starting point; a clean 1966 Mustang hardtop that was in decent shape but not perfect by any means. The engine was a 200ci six.

2. To breathe some fire into our Mustang, we went straight to the source, Ford Performance, for their brand-new 500hp Z2363 Boss Crate-Engine, backed by a Performance Automatic 4R70W Blue Chip transmission. The Boss engine makes 507hp (at 6,500rpm) and 450lb-ft (at 5,100rpm) in an 8.2-deck Boss block with a Scat forged crank and forged I-beam rods, Mahle forged pistons, a fairly healthy hydraulic roller cam (232/240 duration at .050 lift, .580/.602 lift), aluminum Z2 heads, and 10.2:1 compression. The induction system is an Edelbrock Performer intake and FiTech electronic fuel injection, while ignition and sparkplugs are from E3. Yes, it allows very easy, very smoky burnouts!

3. The interior was completely redone with restoration parts from Scott Drake, seats from ProCar by Scat, and some custom bits from Mustangs to Fear, including a one-piece headliner, door panels, center console, and gauge cluster (mounting Auto Meter gauges). Electric-Life supplied power windows for the doors, and Old Air Products supplied the air-conditioning system. The entire car was also re-wired with a Painless Performance wiring harness.

6. That’s a Lokar shifter housed in the Mustangs to Fear center console.

7. The Mustangs to Fear door panels require power windows, which were supplied by Electric-Life. The door panels also use 1967 Mustang door handles.

8. The project’s main sponsor was Classic Performance Products (CPP), so they supplied the complete suspension for the car front and back. That includes a coilover front suspension, power-steering setup, big disc brakes, and a 9-inch rearend with 3.70:1 gears. The CPP crew also came out in force all week to help with the build, and we couldn’t have pulled this off without them.

9. The color is 2015 Ford Competition Orange from Axalta. The wheels are Rocket Racing’s Booster wheels that were designed specifically for the muscle-car, street-rod, and hot-rod market, and we ordered them with Hyper Shot centers and machined outers. They are also available in full chrome, gray centers, or with Hyper Silver Centers, but we preferred the look of the Hyper Shot centers with the car’s bright orange paint. The tires are P245/40ZR18 Maxxis Victra VR-1. United Pacific lighting supplied the LED lights throughout the car.

10. After fiddling with some timing and cooling issues, it was finally time (3 am on a Saturday morning) to break in the motor and get some smoky burnout shots for the cameras. Those poor Maxxis tires were destroyed by six or seven full-on burnouts with shop manager Jason “John Force” Scudellari behind the wheel.