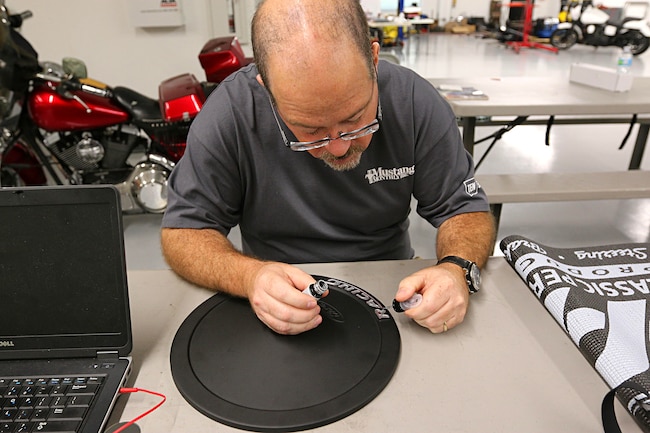 It runs! And it’s bad to the bone! But not without some last-minute drama.

We’re talking about our Week To Wicked 1966 Mustang, which we wheeled into the shop on Monday morning and thrashed on all week, installing all new suspension, drivetrain, interior, wiring…you name it and we upgraded it. And now it runs, sounds amazing, and does the requisite burnouts from hell. Life is good!

With the goal of driving the car out of the shop for said burnouts on Friday, the last day was spent finishing the wiring, figuring out the linkage between the Lokar shifter and Performance Automatic transmission, building the exhaust from a Hooker 2.5-inch universal kit, installing the ididit Pro Lite steering column, AutoMeter gauges in the Mustangs To Fear carbon fiber bezel, and bolting in the ProCar by Scat Rally seats.

The drama came when we went to install the G-Force driveshaft. There was confusion about just what U-joint the 9-inch rearend took, and sure enough when we went to install the driveshaft, which was one of the last steps, we had the wrong U-joint. And it was 5:00pm at that point. A flurry of calls and even the robbing of another driveshaft from a different magazine’s project car netted us nothing, until we found the correct joint at a parts store a half hour away. As the crew stayed to fill all the fluids, check all the wires and program the EFI with the FI Tech handheld module, we all were crossing our fingers and toes that the guys were on their way back with the correct hybrid U-joint.

So in went the driveshaft and we all stood in anticipation as shop manager Jason Scudelleri got the job of turning the ignition key. After some messing around with distributor and ignition wires, the Ford Performance crate motor cranked over a few times then barked to life. A few minutes to adjust the timing and allow the FI Tech fuel injection to “learn” the calibration, and up went the garage door and out went our bright orange Mustang into the night. Then we had a leak. Water was gushing from between the water pump and the timing cover. An hour later, with a new water pump gasket installed (which meant removing the entire All American Billet front dress and radiator), we had it back together and poised for the burnout—finally.

Loading the PA converter for a second and releasing the brakes lit the Maxxis tires up into a glorious smoke show for our generator-powered lights as the video cameras rolled, and all was right with the world—even though it was past midnight at that point. Actually, the last burnout came down at 2:30 am, but it was epic as Jason kept ‘em lit for a good 400 feet. Watch the video for proof.

A build like this requires long nights, little sleep, more than a touch of beer, occasionally hurt feelings, and plenty of missteps, but once the smoke is in the air, the process is all worth it. Now we just have some fine tuning type work, like aligning the front suspension and troubleshooting everything to make it road-worthy, and we’ll soon be hitting the road on the way to some car shows.

Keep reading Mustang-360.com for updates on where the car will be, and if we’re in your area in the next year, come on out and see it in person.