Interior bits and wiring, wiring, and more wiring were the theme of the day on Thursday, July 20, 2017, as we near the end of our Week To Wicked project 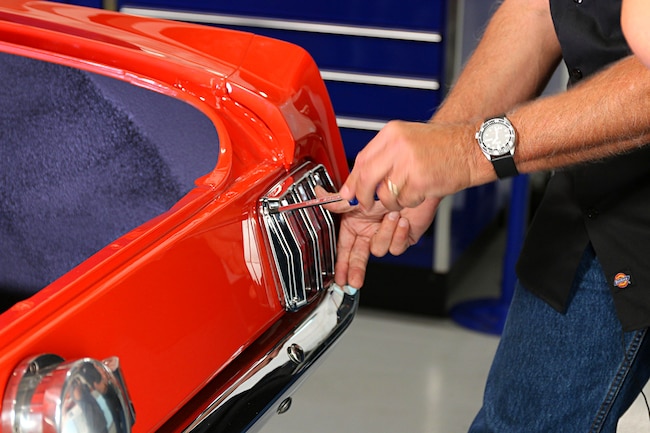 With the glamorous stuff out of the way, like dropping in the engine and trans, installing the suspension, brakes, and wheels/tires, we’re now down to the little details that aren’t sexy but are mandatory to actually finishing a car and being able to drive it. A lot of that is finishing the installation of the Painless Performance wiring harness and making the FI Tech EFI and Performance Automatic transmission’s electronics talk to each other.

We also installed the United Pacific LED lighting for the headlights, taillights, turn signals and front marker lights, plus the company’s trick mirrors. The mirrors look the part of restoration-level, NOS mirrors but have built-in (and invisible when not on) turn signal indicators in the mirror lenses that only require a single small wire for activation.

Our shop tech Christian Arriero tackled the interior, installing the Lokar shifter and Mustangs To Fear center console, door panels, and headliner and finished wiring the dash to get it ready for the AutoMeter gauges in a Mustangs To Fear trim panel. The last step for the interior is to bolt in the ididit steering column and hook it with a rag joint to the CPP power steering box. Finally, the last thing on our checklist for today is to fabricate the exhaust system using the Hooker universal 2.5-inch exhaust kit to connect the Hooker Compeition headers to the Aero Chamber mufflers, with turn-downs for now to get the car running. (We’ll build complete over-axle tailpipes later on.)

What’s left tomorrow morning? Fill the fluids and light this candle that’s what! So make sure to come back tomorrow, and check out Mustang Monthly’s Facebook page as we live stream the engine firing and the big smoky burnouts that are sure to get us in trouble with the neighbors! 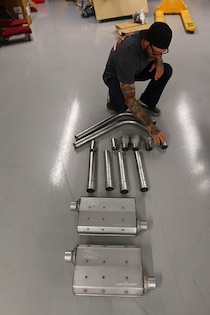