Day Two of Building a 1966 Mustang From Stock to Righteous 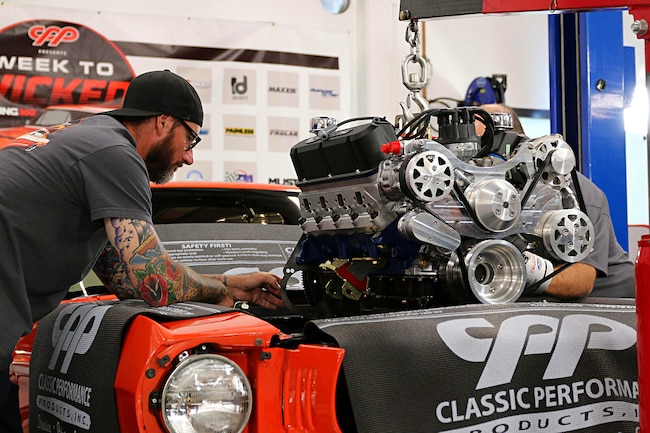 After a long first day in our Week To Wicked Mustang buildup, we had the complete CPP (classicperform.com) suspension installed front and rear but had yet to tackle the brakes. So, the first thing on the morning of Day 2 the CPP crew installed the front spindles and 13-inch brakes with massive calipers, then slid the rear discs onto the 9-inch and created new brake lines and bled the system. Then it was finally the moment we all waited for: dropping in the Ford Performance (PerformanceParts.Ford.com) Boss 363 crate motor and Performance Automatic (PerformanceAutomatic.com) transmission!

As the FI Tech (fitechefi.com) crew was readying the fuel tank for their trick Hyperfuel in-tank fuel pump setup, Jason, Christian, and Mark removed the pilot bushing that came with the engine and installed the flexplate, Energy Suspension (EnergySuspension.com) polyurethane mounts, and some other pieces to the engine, getting it ready to drop in. After taking a brief lunch break, in went the engine and we all stood back marveling at how bitchin’ it looked, with the black Ford Racing valve covers working perfectly with the satin black engine compartment. With the engine in place, the lift took the Mustang skyward again so we could install the PA transmission and wiring harness.

Then it was time to bolt the FI Tech throttle body to the Edelbrock Performer RPM intake and install CPP’s power steering lines and fluid reservoir, mount the E3 ignition box and coil, and install a Lokar throttle pedal and cable. That was at the front of the car—out back the guys dropped in the CPP fuel tank and filler neck, ran the fuel lines, then topped it off with a Scott Drake (drakeautomotivegroup.com) LeMans gas cap. The last step for the night was to lift the car back in the air and installed the Hooker Super Competition headers (holley.com/brands/hooker), installing them from the bottom side.

On the list to do tomorrow is to install the radiator and Derale (Derale.com) electric fan plus all the coolant lines and hoses, connect the ididit (ididitinc.com) Pro Lite steering column to CPP’s steering setup (which gets rid of the leak-prone hydraulic ram cylinder and lines), and then begin the laborious process of re-wiring the car with a brand new Painless Performance (painlessperformance.com) wiring harness and finish all the engine wiring that’s still left to do.

Check back in on Thursday as we tackle the interior with new reproduction parts from Scott Drake and trick stuff from Mustangs To Fear (MustangsToFear.com), ProCar by Scat (procarbyscat.com), and AutoMeter (AutoMeter.com), air conditioning from Old Air Products (oldairproducts.com), United Pacific (uapac.com) LED lights, and a Hooker exhaust system with Aero Chamber mufflers. While that’s all going on we’ll be finishing the wiring. If we get it all done early, we’ll install the Rocket Racing Wheels (RocketRacingWheels.com) and Maxxis tires (Maxxis.com) and set the car on the ground, fill all the fluids, and light ‘er up. Realistically that’ll probably happen on Friday, after which it’s burnout time! Keep coming back! 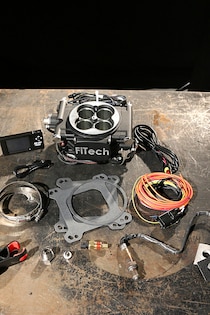 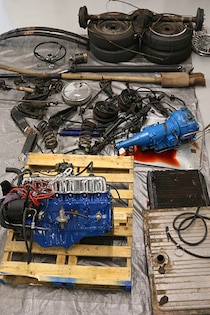 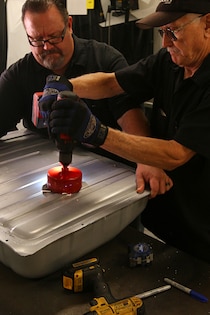