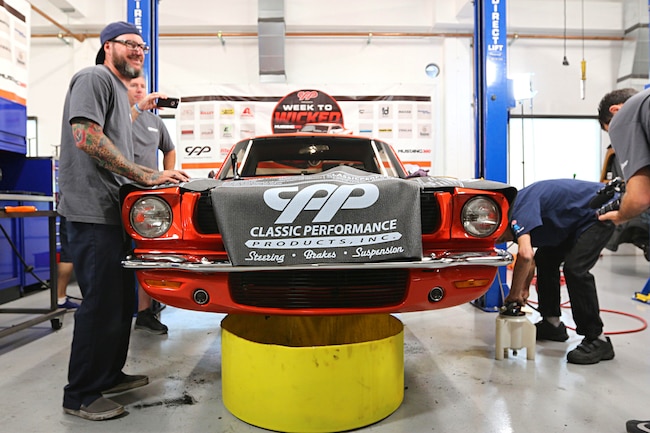 If you haven’t been paying attention, Mustang Monthly and Mustang-360.com are doing on our own Week To Wicked project, where we take a nice car and turn it into a 500hp street and show superstar. For an introduction to the project see here.

This is the fifth Week To Wicked project that our company has done, the first four all being Chevys (1967 Chevelle, 1970 Camaro, and two pickups), but this time the Ford guys get to step in and do it the cool way, by building a 1966 Mustang coupe that we found on Craigslist back in January. The Week To Wicked concept is to drive the car into our Santa Ana Tech Center on Monday morning, thrash all week to install a truckload of aftermarket parts, then drive it out on Friday and do big smoky burnouts in the parking lot.

In reality, you can’t turn a 20-footer into a show winner in five days, so we spent time ahead of the build to address some areas of the car to get it ready for the bolt-on thrash that is the Week To Wicked. The original owner, California black-plate car was almost completely rust free (the only rusty areas were a few pinholes in the floorboards and the gas tank mounting lip) but because we’re going to have the car in our SEMA Show booth and at several shows for the next year or so, it needs to be show quality so we prepped the car for the build by sending it to Superstition Restoration in Mesa, AZ for the fitment of a Mustangs To Fear front fascia and hood, and then a retina-burning Axalta 2017 Mustang Competition Orange paint job.

Once back in California, we set about detailing some areas that would slow us down during the actual build week. That included cleaning up the interior and re-assembling the car after paint (bumpers, grille, etc.), running some of the Painless Performance wiring harness, and other small details. Today was Day 1 of the Week To Wicked build where we took the car for an initial test drive, then bought it into the shop and starting turning wrenches. Out came the original 200ci 6-cylinder and C4 and in went a complete Classic Performance Products coil-over front suspension and leaf-sprung 9-inch rearend, with subframe connectors tying the car together.

The final piece of the puzzle before putting the car back on the ground is to mount the Rocket Racing Booster wheels (with Hyper Shot finish) and Maxxis tires. When we get here tomorrow at 8:00 am, it’s time to drop in the 500 horsepower Ford Performance Boss 363 crate engine and Performance Automatic Blue Chip 4R70W automatic overdrive transmission, then plumb the fuel system and add the CPP brakes. 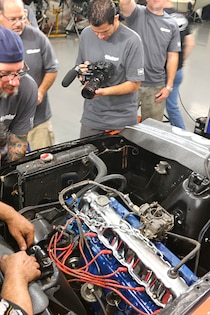 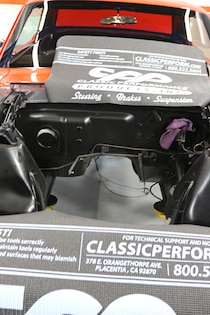