Mustang360.com be taking a vintage Mustang coupe from Zero To Hero in a week, starting July 17 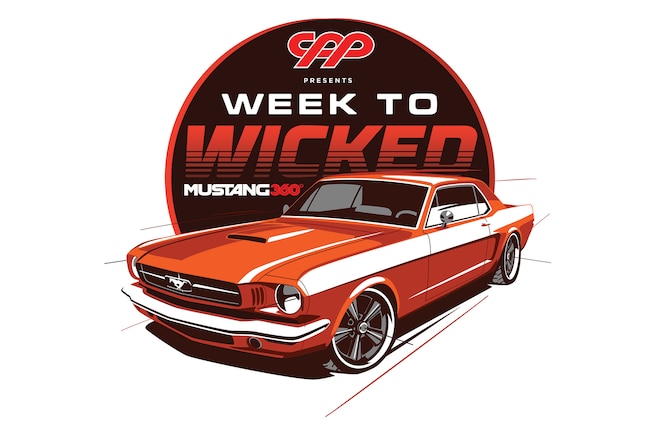 What’s that? We’re building a complete car in a week? Right now, you’re thinking we’re either insane, delusional, just flat lying to you, or all of the above, right? Well, tune into Mustang360.com starting on July 17, 2017, and we’ll show you how we’re doing it.

Several of our sister titles in TEN have done what are now called Week To Wicked builds, starting with a nice but certainly not perfect vehicle and over the course of a week, turning it into a fantastic, show-quality driver. This July, it’s our turn at Mustang360.com, as we’ll be building a 1966 Mustang coupe, replacing nearly everything on and in the car. The car we’re starting with is a 6-cylinder coupe that we found in Southern California on Craigslist. It’s an original owner, black-plate car and is completely rust-free (those of you in the rustbelt are no doubt accusing us of cheating right now, but that’s one of the only perks to being a car guy living in Los Angeles—rust-free sheetmetal) and was in decent shape but truly a 20-footer—looks great from 20 feet away, not so great up close.

With apologies to our friends at the Mustang-6 Association, this engine is just to weak to satisfy our speed lust with the ’66, so it is being replaced with….
…this beauty right here, Ford Performance’s latest Windsor-based engine, the Z2 363ci Boss crate motor. Naturally aspirated, it makes 507hp (at 6,500 rpm) and 450 lb-ft of torque (at 5,100 rpm) via a Boss 302 8.2-deck iron block, Ford Z2 aluminum heads, and a healthy but streetable hydraulic roller camshaft (232/240 duration at .050, .580/.602 lift). Yeah, it’ll be a thumper, but that’s just what we’re looking for. Topping it with an FI Tech EFI setup will tame it down on the street and add a little power across the board.

The car ran but not great, and handling was typical 1966 bias-ply-tire sloppy, both of which will be fixed during the Week To Wicked build week starting on July 17, courtesy of a brand new Ford Performance 500hp crate engine (a Z2363 pushrod Windsor that makes 500hp) backed by a Performance Automatic overdrive trans, and a complete Classic Performance Products (CPP) suspension and brakes. Other companies on board with this project and providing parts include Scott Drake, Mustangs To Fear, Auto Meter, E3 spark Plugs, FI Tech, G-Force (driveshaft), ididit, Maxxis (tires), Rocket Racing Wheels, Old Air Products, Painless Performance, ProCar by Scat (seats), AM Hot Rod Glass, and United Pacific (lighting), with more coming every day.

Because the car was a 20-footer destined for car shows and cruise nights, and also our company’s SEMA booth, it needed to be “prettied up” so we sent it to Superstition Restoration in Mesa, AZ to have a Mustangs To Fear front fascia and hood installed and a new coat of Axalta Competition Orange paint. This was done prior to the week-long buildup for obvious reasons (you can’t paint a car in that time span while also changing every other part on it), so it will be shiny and new looking on the outside as we blow it completely apart.

The interior is all there, but that’s about all you can say about it. Most of this will be replaced with new parts from Scott Drake, ProCar by Scat, and Mustangs To Fear.

Keep coming back to Mustang360.com throughout the week of July 17 and watch the wrenches fly, all on video. And also watch the print edition of Mustang Monthly for the full story on the project buildup, starting with the December issue (tentatively). It’s going to be fun, and because of the looming deadline there’s sure to be some tool-throwing involved!

Mike Rossi and Justin Smith at Superstition Restoration fit the Mustangs To Fear front fascia and hood and did the rest of the bodywork before laying on the blinding Axalta Competition Orange paint.