On the Road Again: Part 4 in our series on Project Road Warrior, Courtney Barber’s 1965 Mustang coupe, and their 2,000-plus-mile shakedown run

Magazine project cars have a notorious tendency of never being “finished” according to their initial, stated goals. There are a lot of reasons for that, ranging from pure laziness to lack of ongoing interest, lack of money, or mid-project mindset changes. But regardless of the reason I’ve always considered leaving a project unfinished a rip-off to the magazine’s loyal readers, especially those who have been closely following the project. Rest assured, however, that Project Road Warrior, the 1965 Mustang hardtop that we’ve been working on with the car’s owner and Team Mustang Girls’ leader Courtney Barber, is not only finished but has lived up to the lofty expectations we heaped upon it when the project started.

The main goal was to turn a drivable but ragged and (unknowingly) rusty Mustang into a much nicer car that can complete numerous 1,000-plus-mile road trips, do it in style, and go faster with better fuel mileage and reliably, and without incident. Those goals have indeed been met, though the last one (without incident) is still being fine-tuned.

The project started at Stono Body Works in Charleston, South Carolina, where Courtney stripped the entire car to a bare shell, then Stono’s owner Dave Mahan cut the rusty bits off and replaced them with brand new sheet metal from National Parts Depot (NPD). The replaced parts include both rear quarters, the taillight panel, the inner wheelwells, both doors, the hood, and all sorts of other minor pieces. That initial installment in the project was back in the December 2015 issue.

And she’s done. When this picture was taken, we still had to do some work to the fender lips because the Year One billet wheels rubbed a little bit, hence the slightly high stance. Thankfully the QA1 coilovers from Speed Direct make it easy to change the ride height.

After the major bodywork was done, our 1965 hardtop went to two different shops: Mojo Performance in Concord, North Carolina, and then Classic Speed & Custom (CSC) in Charlotte. Mojo finished the bodywork and had the car painted Calypso Green, and then dropped in a Ford Racing 347 crate engine and a Performance Automatic 4R70W four-speed automatic transmission.

With the car painted and the bigger hard parts installed, the car then went to CSC to attend to all the other things that every project car requires, like wiring, fuel, exhaust systems …. The list is endless. One of Classic Speed & Custom’s biggest project with the car was finishing the wiring and installation of the Holley Terminator electronic fuel injection system, and tuning both it and the MSD Atomic transmission controller for the PA trans.

This is the Ford Racing S347JR crate motor (PN M-6007-S347JR) that is advertised at making 350 hp at 5,500 rpm and 400 lb-ft at 4,000 rpm, though Ford generated those numbers with the circle track–spec 500-cfm two-barrel carburetor. It probably makes a little bit more torque with the Holley Terminator EFI throttle body hiding under the Scott Drake air cleaner. For more information on this portion of the story, check out the January 2016 issue of Mustang Monthly, or see the link at the bottom of this story.
TMI provided the interior for the car using its Sport XR upholstery, center consoles front and rear, door panels, and one-piece headliner. Underneath all that comfort is a thumpin’ Kicker sound system. (Photos: Mike Slade)

If you’ve ever torn this far into any car, then you’re aware of the zillions of tiny details that nobody thinks of in the beginning—with Courtney’s help, Classic Speed tied up all of those loose ends and then Courtney road-tested the car all over Charlotte, hard, for a about a week before hitting the road. As CSC co-owner Mark Treichler reiterated, their shop’s reputation is to fix other peoples’ mistakes and diagnose and finish the things still left to be done on a car after it leaves other shops.

That reputation was very important in this case, since Courtney had committed to attending an event as the car was being finished. Instead of the commonsense tactic of road testing her newly rebuilt car for at least a month to work out any bugs, the commitment forced her to do the final shakedown runs on the car’s maiden voyage, 2,000-ish miles from South Carolina to Loveland, Colorado. She explains, “A normal person would probably drive the car around locally for a few months or so, but ‘normal’ has never been one of the words people would pick to describe me. I had to get to Colorado for the start of the Goodguys Tour!” With less than 200 miles on the car, she hit the road.

With a stop along the way in Bowling Green, Kentucky, home to Holley’s headquarters, they stopped in and had Holley’s Robin Lawrence work out a few idle issues they were having on the Terminator EFI system, and then on to Colorado. Courtney says, “After the tune at Holley we were off and the car did amazing for the first 2,000 miles, considering every nut and bolt had been touched in the last six months. The overdrive from Performance Automatic really changed history on the highway. Instead of traveling with the truckers like prior trips, I was actually passing people and not overheating in the process. The EFI was helping with the gas mileage too—on the highway we were getting around 22 mpg and a few times I caught myself going over 90 mph, which was unheard of before the overdrive. I say ‘caught’ because the speedometer still wasn't working so every once in a while I would check the GPS.”

The 1965’s biggest problem in its previous form was a lack of power and no overdrive, which made it difficult to keep up with the high-end hot rods and European exotics that participated in events like Bullrun and the Goodguys Tour.

The only issue on the trip popped up during the first day of the Tour, when the car started running rough (“angry” was Courtney’s term) and then just shut off. She says, “Luckily the Goodguys had a trailer from Goolsby Customs following the tour for these situations, and I made the sad phone call. Yes, it was awesome to have some backup, but geez! Did the car really have to be a jerk on the first day in front of all those people? Why couldn't this have happened on the 2,000-mile trip out here without so many eyes watching?”

After much troubleshooting by the Goolsby Customs crew, it was determined that the problem was the fuel pump mounted too far from the tank, adding to a vaporlock situation. Icing down the fuel tank to get the gas as cool as possible was the quick fix, and it worked for the duration of the Tour until they got back home. Courtney adds, “I now had a fun game to play with people. The ice was slowly melting and made it look like my fuel tank was leaking, so I’d throw a match at the puddle and watch people run! It also made for a great cooler for beverages.”

Courtney Barber is distrustful of the factory hood latch, so she had Manny Costales (“Manny the Paint Guy”) in Charlotte, North Carolina, install hoodpins, just in case.

They say what doesn’t kill you makes you stronger, and that is also true of a long road trip in an unproven hot rod. Courtney sums it up by saying, “Funny how looking back now, the last two days of the tour seem so easy. We kept the trunk full [of ice] and managed to make it to the final stop in Kentucky and then back home to South Carolina without any more problems. Whenever I tell people about what I do, driving around the country in a 50 year-old car, the first question is always, ‘What do you do when you break down?’ After this trip the answer is a little more entertaining. I have always found a way to make it work and keep going. Yes, there have been times I wanted to give up and just cry, but that wouldn’t get me anywhere. My motto is keep on truckin’, and I always will!”

If you want to see Courtney and Project Road Warrior truckin’ down the road, keep your eyes peeled—they’re always up to some road trip shenanigans somewhere.

A tattoo on a car? Yes, to match the rose tattoos on its owner, Russ Petty of R. Petty Custom Murals in Charlotte did the “ink.”
Costales also cut and buffed the Calypso Green paint job.
Before the car was taken on its 2,000-mile shakedown run, all the fluids were topped off with Amsoil products.
We would be remiss without given a huge thank-you to Rick Schmidt and Derek Putnam at National Parts Depot for their involvement in the project and super-fast response time when we got stuck.
Project Road Warrior is more than just Courtney’s daily driver; it’s also how she makes a living by providing exposure to the many sponsors that she has through Team Mustang Girls
This became a familiar scene: stacking bags of ice on top of the gas tank to keep the fuel cold and prevent vaporlock.
The permanent fix to the vaporlock situation was installing a Tanks Incorporated fuel tank and internally mounted pump. It is also a little quieter, though the Holley pump we first used wasn’t loud at all.
Goolsby Customs helped us troubleshoot the vaporlock issue.
Keep your eyes peeled for Courtney and Project Road Warrior, coming to a highway near you. 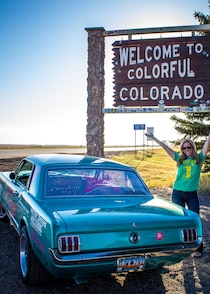 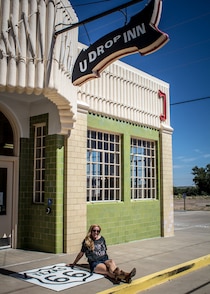 Past Installments of Project Road Warrior