Project Large Marge: How to Install a Flaming River Steering Column on a 1973 Mustang

How To: Installing a custom tilt steering column 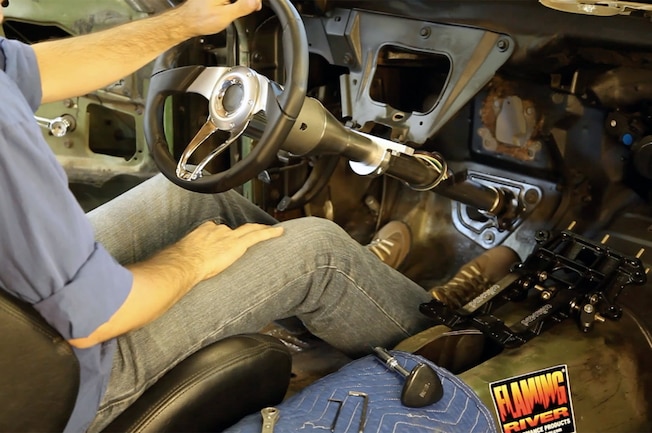 When restoring a Mustang, re-installing new or stock parts is normally a simple matter of bolting them on correctly, but with a restomod build, because many of the parts are by definition not stock, there is always some modification or outright fabrication required. Such is the case with Large Marge, our 1973 Mustang coupe.

Owner and builder Jason Lewis is a road racer at heart and a fabricator by trade, so when contemplating how to build his ’73, he knew immediately that the automatic transmission was not going to satisfy his open track desires. Finding stock pedals on eBay was possible, but that’s when the “custom fabricator” in him came shining through and he decided on using Wilwood’s forged forward-mount pedal kit, which will obviously require some attention to mounting in the ’73. But before the pedals can be located and hung the steering column must be properly positioned, so that’s what this video shows: installing the Flaming River column.

After some measuring and careful consideration, Jason chose the 32-inch-long, paintable column with tilt and turn signals, but without the ignition switch. Jason is known for using push-button start switches (like in most new cars including the Mustang) in his cars, and Marge was to be no different. As you can see here, the column is a breeze to install, as is the Flaming River steering wheel and adapter.

With the column now located and installed, the next task is to mount the Wilwood pedals to the dash and fabricate a simple support for them, so make sure to check back soon for that to come to Mustang360.