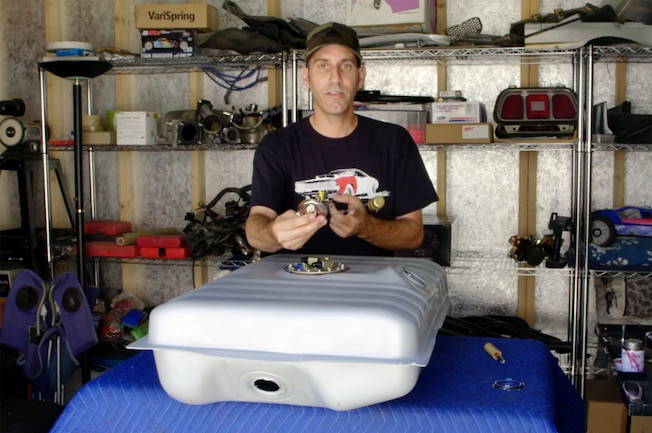 Our 1973 Mustang is 42 years old, which means the gas tank has seen 42 years worth of various qualities of gasoline, sludge, condensation, residue, and most likely rust. Since we’re upgrading the engine to a blown and injected (Holley Terminator EFI) combination, we knew the stock tank, lines, and mechanical pump were out of the question for use, so we needed a new tank and fuel system.

It’s easy to out-trick yourself when it comes to a fuel system. By the time you buy a fancy aftermarket pump, filters, and several dozen feet of braided hose and fittings, it’s shockingly easy to spend $1,000 or more on a fuel system. But there’s an easier and less expensive way to go about it for a street car, even one that’ll see track days like Large Marge. We got a brand new tank from Tanks Inc. with an internal Walbro electric fuel pump, the same pump used in countless OE applications so you know it’s dead-nuts reliable. The whole kit from Tanks Inc. included the tank, pump, baffle, mounting kit, sending unit, and new tank straps, and cost only $235.00. That’s less than most aftermarket pumps by themselves!

Some cutting and possibly welding needs to be done to the new tank to mount the internal pump, so it’s always a good idea to start with a brand new tank that’s never had fuel in it to avoid creating your own Hindenburg scenario. Watch as Jason shows how to prep and install the tank, and also check out his handy tech tip on how to easily assemble twist-lock hose and fittings.