Project Large Marge: How to Weld Up a Differential on a 1973 Mustang Coupe

We take a break from responsibility in the name of stupid fun and hooliganism. 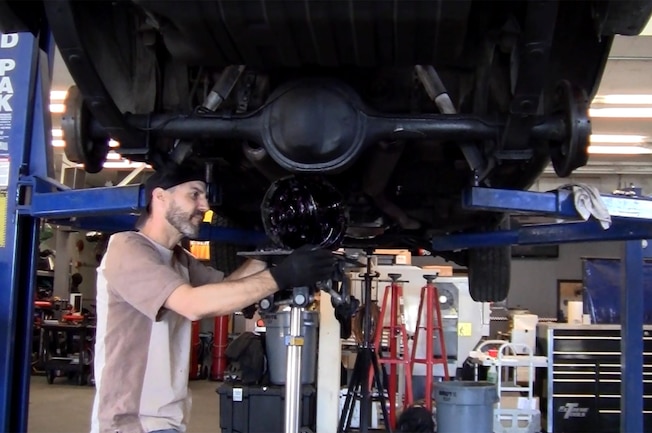 The last time we brought you Project Large Marge, our 1973 Mustang coupe project car, we ventured to a professional shop, J.E.M. F/X, to get a rollbar bent up the right way and also modify the floorpans so that we could properly mount some cool sport seats we got from Jegs.com for a smokin’ deal. But now for some completely different!

You probably know the difference between an “open” differential and a limited-slip or locker-style differential. An open diff, which most cars came with from the factory, puts power to the wheel with the least traction resulting in the “one wheel peel” on slippery surfaces. Open differentials are cost effective for a manufacturer and work just fine for 99-percent of driving situations, but they are definitely not what you want for traction either in a straight line or around corners—limited-slip or Detroit Locker-style differentials are necessary in anything considered a performance car. But those cost money and require setting of the ring and pinion clearances, adding even more cost. The cheap, redneck way of creating your own locked rearend is to weld up the spider gears in the differential so they can’t move. This essentially creates a spool, locking both axles together so that both tires spin at the same time, at the same speed.

Now, a word of caution here: This is not recommended for a street car that sees a lot of driving. It works, but the car drives awkward around town, and in slow speed turning, like in a parking lot, the tires bang and chirp since there is no longer a speed differential between the inside and outside tires. There’s a reason that pure drag cars have spools instead of actual differentials—they don’t have to turn. This dirty little trick can also be the death knell for weak stock axles—eventually, you’re going to overstress the axles and break one, and that’s never good.

However, it’s easy, costs nothing as long as you have a welder (or have a buddy with one), and it’s very effective at maximizing traction. So watch as we weld up the spider gears in Marge’s open diff, and then go have stupid, delinquent fun on some dirt roads around Southern California!

Note: No Mustangs were harmed in the making of this video.