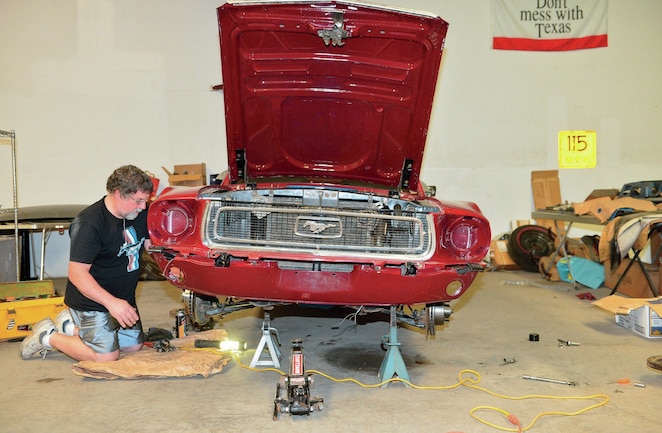 When we last left you (Oct. ’14 issue), we had installed and fired up the stock 289 in our project ’68 convertible. Elated, Bob Becker drove a victory lap (very slowly) around the perimeter of Troy Anderson’s backyard, where we are working on the car. The 289 sounded great and the C4 automatic seemed to shift OK but Becker couldn’t drive very fast for two reasons. First, he was on grass in a backyard. And second, my little pony needed new brakes—speed is not desirable when the ability to stop is an option.

So, part four of the build became fixing the brakes, which, from the factory consisted of power discs up front and drums in the rear. New replacement drums came from the local auto parts store, but for the front discs we went to Performance Online (PO), which gave us a range of options. At the top of their upgrade heap was a set of four-wheel disc brakes with four-piston Kelsey-Hayes calipers, which I determined was a bit too radical for this build, which has the goal of just being a nice driver.

I have decided to stick with the stock, C-code, two-barrel 289, so the car won’t be loaded forbear by any stretch of the imagination. This convertible is more about cruising in style—air conditioning, automatic transmission, console, power top, AM/FM radio … you get the picture. So, how much extra braking does it really need? The car already had a power brake booster and working master cylinder from the factory but Performance Online offers a replacement brake booster mounted to a dual master cylinder, both brand new. This remove-and-replace option was tempting, but once again the default button led us back to a stock system, though if your car has manual brakes this power setup from PO may be the right choice. If you go that route, converting from manual to power brakes, you’ll need a new proportioning valve and there’s more work involved drilling a couple mounting holes in the firewall and tapping into a vacuum source.

PO filled my needs with their factory disc brake kit. My convertible has power disc brakes in front and drums in the rear, just like stock but with all brand-new parts. If you’ve never worked on brakes before, then this story is right up your alley, as we show step-by-step how to do it.

03. After sitting a decade or so, the piston had rusted inside the caliper. Becker was able to pry the pad back with a screwdriver and release the caliper.

04. Remove the brake hose on the back of the caliper. Our new kit came with a new brake hose for each side.

05. Remove two bolts to remove the “stabilizer” (also known as a shield) from the caliper assembly (see schematic).

07. Pull out the brake pad from the backside of the rotor.

08. The old rotors could possibly be machined and reused. Notice the caliper bracket sticking up behind the rotor.

10. Using a screwdriver, pop off the grease cap on the end of the spindle.

11. Pull out the cotter pin under the grease cap.

12. Remove the lock nut, which just slides off the main nut.

13. Remove the adjusting nut and washer.

16. The stock rotor (right) is a two-piece design, compared to our new one-piece rotor from PO. Cooling vanes are the same.

17. Use the palm of your hand to push grease into the area around the rollers to pack the wheel bearings with new grease. This method is old school and messy, but is a good alternative to a bearing packing tool and if you’re thorough works just fine.

19. Set the inner tapered bearing face down inside the rotor until it seats.

20. Tap the new grease seal into place lightly with a small hammer. This seal doesn’t have to go very far. A seal installer makes quick and easy work of this, but a small hammer can get the job done. Some people use a small block of wood or a large socket too.

21. Remove the protective coating and whatever grease prints you put on the new rotor with carburetor degreaser or brake cleaner.

22. Install the new rotor onto the spindle.

23. Insert grease into the hub and then slide the fully grease packed outer tapered wheel bearing onto the end of the spindle, making sure the rotor is fully seated.

24. Install the spindle washer onto the spindle then screw the nut on all the way by hand. To seat the bearings, snug the nut down with a socket and then back it off just a tad (one flat of the nut is usually sufficient). Spin the rotor by hand and make sure there’s a little bit of resistance but not too much. Once that’s done, install the retainer and retaining nut.

26. Install the grease (bearing) cap. A large socket or a block of wood with a hole cut out of the middle from a hole-saw helps to seat the cap squarely.

27. Insert one disc brake pad inside the caliper bracket (anchor plate) on the backside of the rotor.

28. Note this special bolt with blue Locktite and no threads. This bolt attaches the caliper to the horseshoe bracket and allows the caliper to slide back and forth with brake pressure.

29. Install this clip on the caliper bracket that bolts to the spindle. Notice the bolt with blue Locktite.

30. Slide the caliper, with the other brake pad installed, over the rotor and bolt on the bracket.

31. Install the new brake hose into the caliper and tighten. Attach the opposite end of the new hose to the brake hardline on the chassis.

32. Repeat these removal and installation steps for the other side, then flush and bleed the system with new brake fluid and the brakes are ready to go … I mean stop.

Catch up on the rest of the Project Mustang builds here!

Over the Rainbow of Colors

Among the most interesting Ford special editions was the Rainbow of Colors promotion for dealers in California, Utah, Idaho, and Hawaii.