Triple Threat - AmericanMuscle.com upgrades the engine, exhaust, and suspension of its project Fox

When we last checked on AmericanMuscle.com's Fox project, the company kicked off its push into the beloved Fox market by saving a 1993 Mustang GT from its state of disrepair. You'd have to agree that it's a noble cause. Of course, it's more than just noble, as the company isn't just restoring it to stock. They decided to turn it into something that Ford never built—a '93 Cobra convertible.

Our first installment on this car focused on AmericanMuscle's first two stages of the project, which involved restoring the convertible's good looks and replicating the visage of the '93 Cobra. The outcome of these upgrades, inside and out, was a like-new Fox convertible that resembled a Cobra convertible.

The transformation was impressive, with the car leaving its tattered image well in the rearview mirror. However, despite its upgrades, the '93 GT lacked the performance to back up its newfound appearance. Having a project car that was a mere pretender just wouldn't do. The AmericanMuscle crew set out to remake the car in image and attitude.

"In Stage 3, it was time to install some much-needed performance mods. Up until this point, we've fully restored our nearly destroyed '93 convertible back to showroom quality," said Shane Lesky, social media representative at AmericanMuscle. "We were trying to build the car that Ford never made ... a '93 Cobra convertible. With all of our Cobra styling additions, it was only right that it had the power to back it up!"

That brings us to the project's third stage. To make its performance jibe with its looks, AmericanMuscle put together an HCI package from Ford Racing Performance Parts. The company backed it up with an exhaust created from FRPP, BBK, and Flowmaster gear. To put the new power to the ground, the team revamped the suspension with parts from Koni and SR Performance.

"The results were exactly what we were after in Stage 3. We gained over 100 horsepower to the rear wheels, and didn't sacrifice ride quality, gas mileage, or any driveability," Shane added. "This thing is a fun convertible to drive! It has the power and handling of a true Cobra, but the luxury of being able to drop the top on the streets."

In the end, the AmericanMuscle convertible Cobra clone outperformed a stock '93 Cobra on the dyno. Moreover, it's a unique ride that you can cruise with the top down and really soak in the lope of the E303 and the rumble of the Flowmasters. That's something you couldn't do in a real OG Cobra.

"The plan for Stage 4 has always been to go a little crazy," Shane said. "Even though we've built the Cobra of our dreams, we wouldn't be AmericanMuscle without taking it a step further. I think we can definitely confirm some help from a power adder in the near future ..." 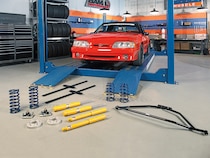 This round of upgrades generated impressive throughout the curve, and with 272 rwhp, AM’s project Fox is way ahead of a stock ’93 Cobra, which was rated at 235 flywheel horsepower and would typically put down around 220 at the wheels.

With the FRPP HCI and free flowing exhaust on board, the AmericanMuscle Fox project pulls harder from the jump and keeps on revving beyond the limits of the stock setup. The peak-to-peak gains clocked in at 82.7 hp and 50.13 lb-ft of torque, However, things were really cooking at 5,200 rpm, where the combo picked up 104.60 hp and 111.02 lb-ft of torque. This combo is undoubtedly more fun to drive.