It's pretty much impossible to dispute the notion that the latest version of the Mustang's 5.0-liter engine—the Coyote—is by far is one of the most outstanding powerplants that has ever been factory-installed in any late-model Pony. Seriously, and as results of projects like our Bolt-On Battle attest, the Coyote unequivocally is the best naturally aspirated late-model V-8 bullet for bolt-on mods, whether it is installed in a modern Mustang or transplanted into a Fox.

With that said, let us be clear in stating we also have absolutely no qualms with keeping things real when it comes to a Mustang's primary source of motivation, especially when a project is centered on one of our beloved '79-'93 Mustangs. Swapping a mod-motor between the fenders of a Fox will be the pinnacle of ultimate cool for many years to come, but keeping things pushrod also has strong merits. This is especially true as the earliest late-models are becoming more and more collectible and subject to restoration efforts of all sorts.

Our introductory report on Project Pretty Ugly (a rough-around-the-edges '79 Mustang coupe) focused on Rick Anderson's cool revamp of the Pony's OG interior and engine bay. It explained that the 'Stang was dubbed "Ugly" because Rick has no intentions of restoring any beauty (if there ever was any) to its original Light Chamois exterior. "I don't want to worry about the moron who's parked next to my Mustang throwing his door into it. By leaving Ugly the way she is, I won't be able to tell if or when it happens ... and I honestly don't care," says Rick.

Before closing that report, we also mentioned the proposed engine for project—a radical 427ci bullet that Rick plans to use regularly on the street, as well as flog mercilessly on the dyno and dragstrip. While some might believe installing a hot Coyote is the better move, we seriously don't find any flaws with this nod to the pushrod powerplant. The old-style engine will have a custom modern-day flair. D.S.S. Racing in St. Charles, Illinois, is responsible for screwing together Ugly's big-inch bullet—a 427X that's comprised of a Level 20-prepped, Ford Racing Performance Parts' Boss 351 block (bored 0.125-inch over), and D.S.S.' own stroker rotating assembly and all-new CNC-ported, FH-1, 208cc cylinder heads.

Those of you who are well-versed in '79-present Mustangs' history are quite aware that 5.0s featured four-barrel carburetors from 1979 to 1985. You also know that Ford made the move to (EEC-IV) electronic fuel injection for V-8 Mustangs in '86 (CFI on Cali '85 autos), and the rest, as they say, has been history. One of the cool things about Rick's project is his decision to stay true to the modern side of late-model history by fuel-injecting his project-car's big Windsor. However, believe it or not, he's also paying proper homage to the four-barrels that got things started on the first high-output 5.0s.

If you're wondering how this is possible, you're obviously not familiar with Dominator EFI (PN 554-114). This all-new engine-management system from Holley—the company that also makes the aforementioned carbs—easily facilitates using ultra-high-performance engines in cool street Mustangs like Rick's.

"Making horsepower these days is easy," Rick says. "Driveability and durability are the keys to having a neat street car, so I built this Mustang so it can be driven around with ridiculous horsepower (in comfort, with an automatic transmission, cruise control, and air conditioning) and still run the 30-mile/three-passes True Street events, too."

We all know how difficult it is to successfully reach such lofty goals, especially with a Fox 'Stang. Check out the photos and captions to see what Rick has done thus far, and stay tuned to future issues of 5.0 Mustang & Super Fords for more developments in this exciting project. 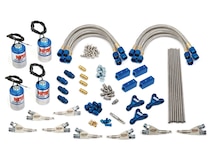 Project Pretty Ugly's dyno debut was, in a word, excellent when you consider the max horsepower its D.S.S. Racing-built 427 pumps out at the rear tires (without and especially with nitrous oxide).

Although the Dominator EFI system features VE-based fueling strategy, the fuel side of tuning Rick Anderson's unique setup (naturally aspirated) was handled by the ECU's Fuel Map and Learn Function. "I spent more time figuring out the converter and keeping the bottle warm than I did tuning," says Rick.

It’s all about power on this dyno graph; there’s definitely plenty of it. The D.S.S. 427 in Rick’s ugly coupe really gets active in its natural state, to the tune of 471.18 peak horses. While that’s awesome power in its own right, 250 horses of fogged nitrous (remember, only one stage is being used) is the shining star in this Mustang’s performance profile. The single-stage blast of juice lifted rear-wheel power to 678.20, well across the 700-horse (crankshaft) plateau and on a direct course to the magic 1,000, which should come with ease when the nitrous is exchanged for a supercharger.

In addition to the Quick-Start ignition and fueling strategy, Holley's EFI system features an integrated electronic transmission control (this component currently only controls Brand-X 4L60E and 4L80E automatic transmissions), which played a big role in the dyno tests. "After we discovered the torque converter was a little too loose (only 136 mph wheel speed at 7,000 rpm), we used the EFI's transmission controls to lock the convertor and achieved the 160 mph at 7,000—that is better, but still a little lower than I think is actually attainable at this power level," Rick says.

Nitrous guru Monty Smith helped with the nitrous jetting, choosing a 0.028 jet that is estimated to add approximately 250 hp. While Monte's tune is based on slightly leaner air/fuel and less timing, the dyno results prove it's perfect for Rick's project 'Stang.

Of course, putting the ‘79 through its paces on the quarter-mile is next. Considering the weight of the car (3,200 pounds with Rick onboard) , we think the ugly little coupe should be a 9.20-8.90 car.

Horse Sense: We hope by now you've all had a chance to read and fully digest "Insides Stout" (July '13), an introductory report on our friend Rick Anderson's stealth-style street/strip makeover of a homely little '79 coupe.