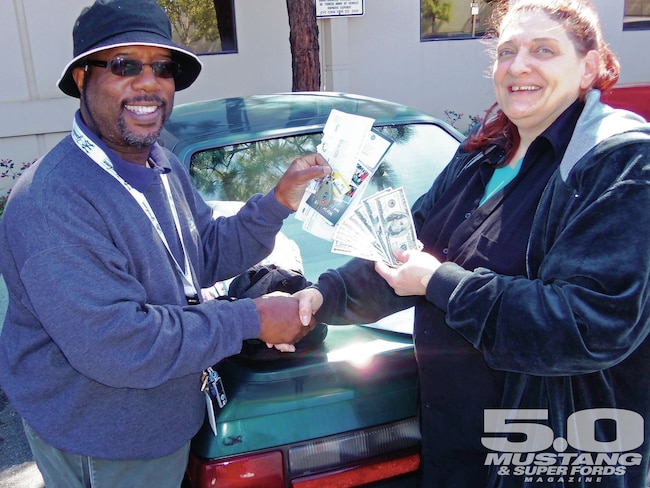 Alove for modifying, personalizing, and building hot Mustangs is one element of the DNA in all of us at the mag, and just about anyone else who faithfully reads 5.0 Mustang & Super Fords. Yes, we, in a sense, live for badass Ponies and rightfully take pride in having a role in their development. Through the years, the magazine's full-time and extended staff members have taken part in many Mustang builds. Some projects are high profile and have been successful, and there are some that unfortunately have languished into that area of the almost forgotten. And there are great ideas that still haven't come to fruition.

While time, or a lack therof, is often included among the main reasons why project 'Stangs don't get finished (Big Steve says project 'Stangs are not done until they're sold), we know the reality is that the project efforts of many hard-core enthusiasts usually screech to a halt because their owners' lofty intentions exceed beyond their budgets. The reality of limited funds is one of the factors that led to the acquisition of our latest inductee in the 5.0 Hall of Project Cars--a bone-stock, 145,000-mileage Deep Emerald Green '91 5.0-liter/AOD LX hatchback. Tech Editor KJ Jones purchased it in April 2012. Many of you who loyally follow our Facebook page may already be up on this new addition to the fleet. But for those of you who don't keep abreast of our online musings, consider this your official introduction.

Yes, this is another project series that features an old-school 'Stang. This virginal LX is perfect for presenting the ideas and upgrade options we have in store, which, in stark contrast to past project Mustangs, are not dominated by the high-tech, high-priced hardware that we've highlighted in other builds. This time our plan is to forgo building an ultimate street Mustang, and instead focus on transforming this project Pony from a stone stocker into a reliable street sleeper. 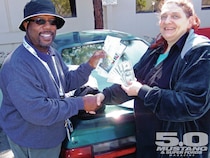 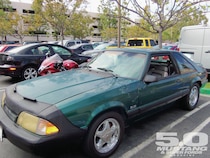 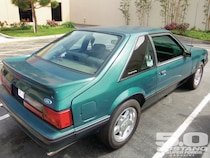 To do this, we're infusing it with a mix of proven, old-school performance bits (and tricks), as well as a few brand-new pieces that are specifically designed for '86-'93 5.0s. It's a concept that's doable by enterprising and capable do-it-yourself types, or the project can be farmed out to a trusted Mustang shop--over time, and as funds permit the work to be done. Yep, just like the old days when such project Mustangs were driven every day.

With '79-'93 Mustangs being so old and abundant (even in stock trim), our Cheaper Sleeper project truly is all about taking a solid platform and building a cool 'Stang that doesn't require deep pockets to make it that way. Today, the market is strong for all sorts of quality, used aftermarket parts. Of course, there are components that must be new. But, remember, there are always fellow members of the Mustang nation who might be changing directions on their combos. If you're patient and really want to save money as you're upgrading, be diligent with your search. The parts or services you need will eventually come around. We plan on exploring all of these avenues of thought-based frugality and sharing the results in the series of articles that we hope you will enjoy. For starters, read on through the following photos and captions that provide a few details about Project Cheaper Sleeper, and some of the first steps we've taken toward ridding it of its bone-stock pedigree.

Horse Sense: Yes, there's a lot to be said about "ultimate" 'Stangs. You know--rides that are masterfully crafted to include interior/exterior appearance, performance, and street driveability. In a perfect world, we'd all have these bases covered when we modify our cars. But given the great expense of taking things to an ultimate level, we totally understand that building one isn't possible for everyone. 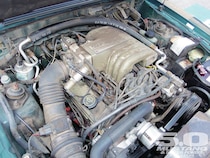 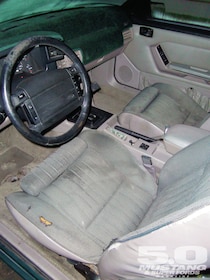 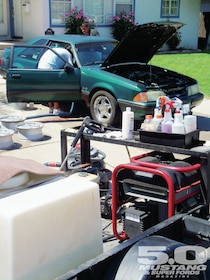 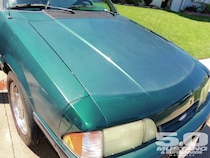 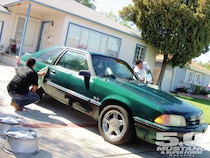 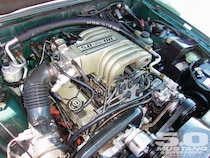 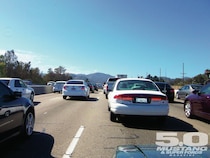 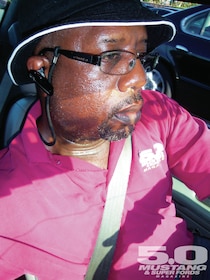 Killer deals and good-guy prices are the fuels that power the huge exchange (on the Internet, at swap meets, and such) of Mustang parts and services that make budget-conscious projects like ours doable.

Diligence, patience and sometimes persistence really are the keys to making stout transactions online--especially in person--as is having cash or electronic funds at the ready so you can strike and close good deals as quickly as possible.

We kicked off Cheaper Sleeper’s mods with a simple gear swap and a spring, shock, and strut replacement. AOD-shifted ’Stangs are extremely sluggish by nature, and OEM gear ratios (3.08 and 3.27) for ’86-’93s don’t help low-end matters at all.

In an effort to improve in this area yet economize as much as possible, Stevie Morrow of Stevie's Garage in Simi Valley, California, installed a spare set of Ford Racing 3.55 gears in the project's differential. With 3.55s, the 'Stang shows slight improvement in stoplight takeoffs, but there definitely is a major difference on the freeway when the throttle is punched to accelerate around big rigs and slower traffic.

The suspension upgrade was made in part based on necessity (the factory coil springs were shot), and vanity as well (we desperately wanted to rid the LX of its notoriously high stance). Our buddies at GTR High Performance assisted in this area, after KJ and GTR's Eddie Zapata struck a $60 deal for a set of lowering springs.

Because of their expertise with Fox Mustangs, most mod procedures for our Pony will take place at Stevie's Garage or GTR. However, as Cheaper Sleeper is your tech editor's daily driver, there also will be occasions where we'll make changes on our Project 'Stang right at work, in our own West Coast Tech Center (located in El Segundo, California).

After working with today's ('05-'13) Mustangs, which produce fantastic rear-wheel horsepower and torque when modified, we admit it's sometimes difficult to process the lower numbers of bone-stock Ponies of the past.

Not long after purchasing the '91 LX, we strapped the Pony down on the Dynojet chassis dyno at GTR High Performance to find out how it's really doing (from a performance perspective) with almost 150,000 miles on the virgin 5.0-liter engine. Not surprisingly, and as you see by the dyno graph and chart, the 'Stang isn't a record-setter of any sort. However, when comparing our project's dyno numbers (with an AOD transmission) against data from Rob Bieskche's bone-stock five-speed LX, which also was tested on GTR's 'Jet (see "The Main Event," Oct. '12, p. 52) the difference of 178 to 209 is almost exactly 15 percent.

Most of this project's upgrades will focus on drivetrain, and in theory, the amount of performance-lost-through-the-drivetrain will tighten considerably once Performance Automatic's new Fox-specific AOD transmission and torque converter are installed in Cheaper Sleeper.

Our goal is to ultimately get the LX to throw down at least 275 horsepower at the feet. While the number may seem miniscule by today's high benchmarks, it's important that you understand we're not out to set big-steam records with this project. Achieving a cool 100 (or more) naturally aspirated horsepower through inexpensive mods is plenty acceptable…and impressive...for an '86-'93 5.0. That's our immediate plan. Then we'll add nitrous oxide.

Everyone enjoys the bragging rights that come with having a modified Mustang that can be driven around anywhere and still get busy when wheeled onto a dragstrip. As we stated earlier, we'd like to have those same privileges with Cheaper Sleeper. And with that said, we also need to clarify the fact that our intent isn't to strive for super-low e.t.'s or warp speed.

A good 12-second daily driver is plenty cool. That's where we hope to get with this project Mustang, and we'll be campaigning Sleeper in the NMCA West's Granatelli Motorsports Mustang Madness class for the 2012 season in pursuit of that e.t. range.

For initial baseline data, we took the car to the sanction's inaugural event (held June 2012 at Auto Club Raceway in Famoso [Bakersfield], California). Competing in the race gave us a great chance to make several runs, and learn more about our lab rat's performance--or lack thereof--in bone-stock, high-mileage trim.

From a racing standpoint, your tech editor did not fare well in the season opener (lost in a first-round double-breakout race against Cal Gordon). However, the project car withstood an entire weekend of wide-open flogging, and was able and ready for KJ's commute to El Segundo the following Monday.

Here is the data from Project Cheaper Sleeper's quickest-and-fastest run of the NMCA West weekend (#7000). The high-15-second, quarter-mile e.t. is about par for the course with a stock-5.0/AOD combination, and we're pleased with the 90-mph speed. We're also confident the e.t. numbers will drop considerably as we go forward, and the addition of horsepower will bring more mph. But keep in mind we're also paying close attention to the Pony's eighth-mile stats. Some of our future drag tests may be conducted on the 660-foot dragstrip at Irwindale Speedway, and the 'Stang's performances in that distance will be used as a benchmarks on those occasions.