Ever since the Mustang was introduced over 48 years ago, owners have enjoyed modifying and updating their cars to meet their individual desires. The current generation Mustang is no exception; Ford has provided such a good base with both the GT and V-6 Mustangs that the addition of aftermarket equipment enables them to achieve amazing performance levels.

Robert Parker always wanted to work for Ford Motor Company and we, as enthusiasts, can be glad he was hired. During his time at Ford Division, which included a stint as Performance Car Marketing Manager, Robert was the driving force behind the Ford, Shelby American, and Hertz program that resulted in the '06 Shelby GT-H. Robert worked closely with Ford Engineering and Product Planning to make the '10 Mustang GT Track Pack a success. He was also instrumental in the marketing of the '11 Mustangs, as well as the Boss 302. He's currently the Southeast Area Market Director in Atlanta.

Growing up as a Mustang enthusiast in Arizona, Robert had enjoyed working on his '67 Mustang fastback, performing both mechanical upkeep and performance modifications. When he purchased a 2013 Mustang GT, he not only wanted to enhance its already stellar performance with parts from Ford Racing, he also wanted to perform the work himself. After arranging to “borrow” the shop facility at Ford's Marietta, Georgia Training Center, he was assisted by Southeast Operations Manager John Galbraith, along with Jim Johnson and Wes Triplette. Jonathan Mirabal, who was attending classes at the training center, lent a useful hand or two as well.

Robert used the lift at the training center; similar projects can be accomplished in your garage with jack stands. An air compressor, impact wrench, and air grinder do make certain parts of this project easier, but are not required. 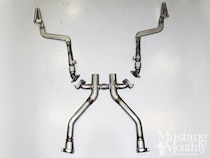 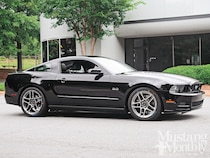