Inside Mustangs Etc. - Better Than New 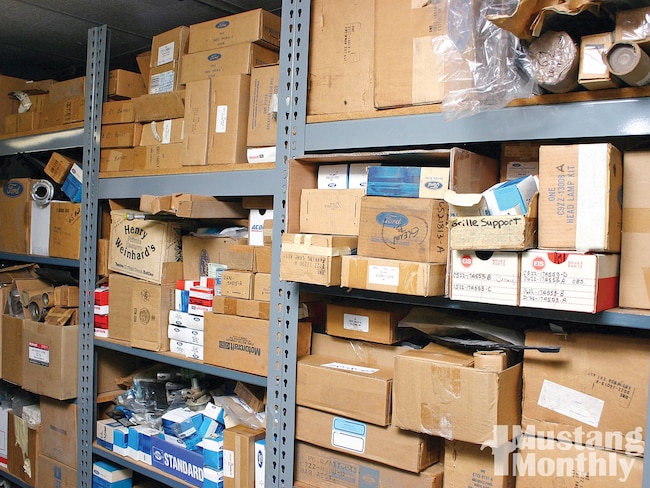 It has been said by San Fernando Valley locals that Mustangs Etc. is a hidden treasure of classic Mustang and vintage Ford paraphernalia. Founded by Arnold Marks in 1976, Mustangs Etc. is a treasure trove of used, new-old-stock, and remanufactured Ford parts. At a time when classic Mustangs were used clunkers that were plentiful and cheap, Arnold snapped up all that he could find for both parts and resale.

It is admittedly overwhelming when you enter the Mustangs Etc. warehouse at the corner of Bessemer and Kester streets in the heart of Van Nuys. Arnold and his son, Garrett, have amassed rust-free body clips, hoods, decklids, doors, fenders, end caps, convertible top assemblies, headlight doors, trim pieces, platforms, engine blocks, heads, manifolds, transmissions, rear axles, interior parts, and a host of other items that have passed through Ford plants from coast to coast. There is also a wealth of restored and unrestored classic Mustangs and other vintage Fords for sale.

Once you've digested the used items, it's impossible to comprehend the N.O.S. parts, literally thousands of items that Mustangs Etc. has acquired over the years for all Ford carlines. Arnold has bought out dealer inventories and snapped up parts at auctions. Garrett finds what he can on the Internet. Shelves are lined with rare and regular production Autolite, Motorcraft, and Rotunda parts that can complement a concours restoration. 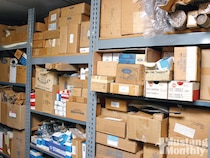 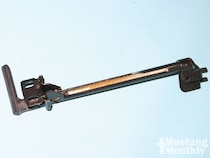 Because Garrett has a vast knowledge of classic Mustangs and their related Ford part numbers, he's always thinking ahead. As the supply of used and N.O.S. parts continues to dwindle, Garrett has asked himself how he could remanufacture original Ford parts and make them like new. For example, have you ever wondered what to do with an old Mustang ashtray or window track or taillight dish? What happens when you cannot find N.O.S. or would rather avoid a reproduction part because you seek absolute authenticity? In other words, you're seeking a restoration consisting of 100 percent Ford parts. Garrett discovered most of these plated and galvanized items could be stripped and replated to look like new. Imagine a 45-year-old ashtray that looks like new. Or a taillight dish with the correct factory finish instead of silver Krylon paint.

Mustangs Etc. takes the renewal concept a step further with rebuilt electrical and chassis components, like power steering control valves and cylinders detailed to concours perfection. They also do power steering pumps. Electrical components like headlight switches are rebuilt in-house and look like N.O.S. Headlight switches never really wear out. Their contacts become contaminated causing the circuit breaker to cycle lights off and on. Most of us just replace them. Mustangs Etc. rebuilds them.

Mustangs Etc. offers a solid-state voltage regulator that looks completely authentic in a concours engine bay. They also rebuild those old point-style regulators if extreme authenticity is important to you. 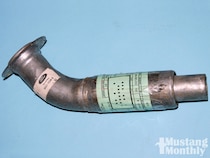 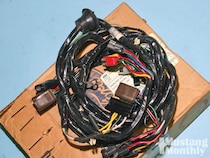 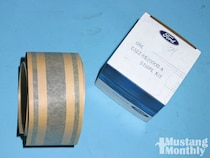 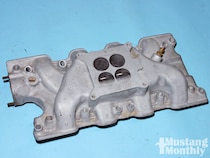 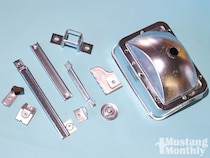 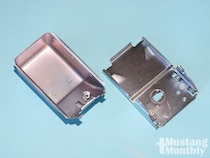 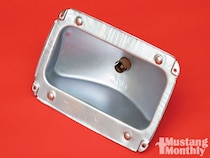 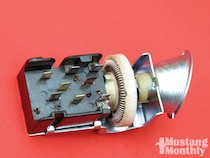 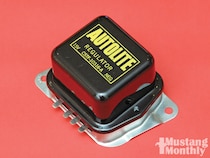 One of the greatest assets at Mustangs Etc. is rust- and damage-free sheetmetal and die-cast Mustang body parts. Count on row after row of decklids, hoods, fenders, doors, body clips, end caps, headlight doors, valances, and more. Engine and driveline components exist as far as the eye can see. If you're interested in investment information, talk to Chuck. If you need classic Mustang parts, talk to Garrett. 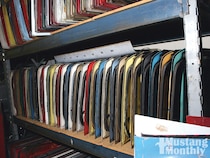 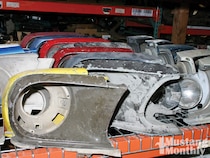