Exorcize Those Demonic Vibrations From An IRS-equipped Mustang Cobra 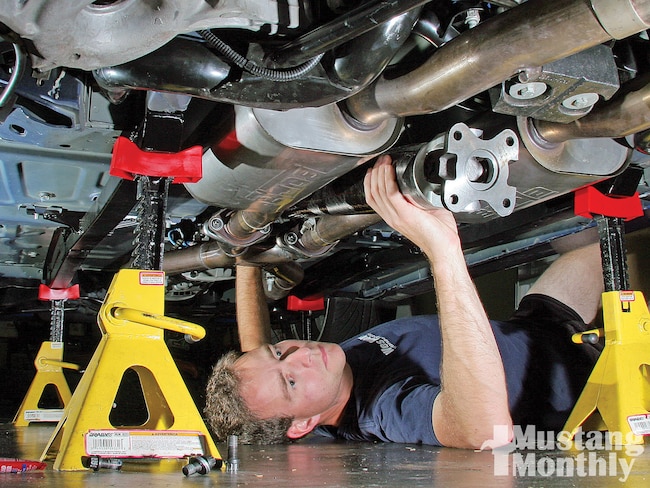 There's no denying that the '99-'04 Mustang Cobra's independent rear suspension offers tradeoffs versus a solid axle. In exchange for improved handling over rough surfaces, the IRS is notoriously sensitive to driveline vibration. Like most vehicles equipped with an IRS, the differential is attached to the chassis rather than to a solid axle. While that reduces unsprung weight, driveline vibrations that would otherwise go unnoticed are amplified though the IRS subframe to the chassis.

Driveline angles refer to the angle of the transmission output shaft and pinion shaft. Since a driveshaft uses universal joints, the angles must be equal to minimize driveshaft oscillations.

The subject of this article is an '03 Cobra with a persistent driveline vibration. After having the driveshaft replaced under warranty, a vibration was still present when cruising on the highway. Since replacing the OEM driveshaft didn't yield an improvement, the next step was to correct the pinion angle. There is no means to adjust the angle from the factory, but Maximum Motorsports makes a differential mounting kit to allow pinion angle adjustment. Using the kit's clever spherical washers and a re-engineered rear differential mount, we changed the driveline angle from two degrees "nose down" to three degrees "nose up." This made the pinion angle parallel to the transmission.

Aligning the driveline using the Maximum Motorsports kit reduced the level of driveline vibration, but didn't eliminate it. Something else was obviously a factor. Reluctant to blame the (replaced) OEM driveshaft, we first took some measurements. Using a dial indicator, we measured the transmission output shaft and differential pinion runout. The results were surprising: The transmission output shaft runout was only 0.001-inch, and the pinion flange runout measured 0.002-inch-both were minimal.

We took our OEM driveshaft to a local driveshaft shop for a checkup. Surprisingly, the shop found a 3-inch-long dent which ultimately affected balance. It looked like a new driveshaft was in our future . . .

While the OEM aluminum shaft is light, the PST shaft is about two pounds lighter. This is not a huge weight loss, but it takes less horsepower to spin. Plus it is stronger. The PST carbon-fiber shaft is also safer because in the event of a failure, the carbon filaments harmlessly unravel rather than turning into a pole vault like a metal shaft!

Of most interest to us, the carbon-fiber allows the PST shaft to damp vibrations and shock to the differential. Mark Veldhuis of PST explains, "One of the characteristics of the carbon is to absorb vibration. Instead of transmitting power from grain to grain in a metal shaft, the power is transmitted through the fiber the entire length of the shaft, and that allows vibration to dissipate."

Installation of the PST shaft was straightforward. Since it was assumed to be "perfectly balanced," orientation of the shaft was not important. While our original vibration was noticeably reduced, our subsequent test drive revealed a new vibration starting at 80 mph.

Initially, we were confused . . . until we remembered our runout measurements. Our driveshaft was spinning 0.002-inch off-center at the rear and 0.001-inch off-center at the front. To counteract the imbalance, we started installing small 1/2-inch SAE washers under the pinion flange bolt opposite the point of maximum runout. Adding exactly 10 grams of weight (two washers) eliminated the 80-mph vibration.

Thanks to innovative products from Maximum Motorsports and Precision Shaft Technologies, we were able to rid our '03 Cobra of its driveline demons. While it took a bit of work and adjustment, the results were well worth the persistence. 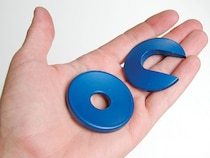 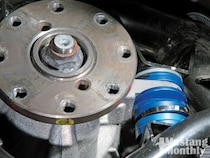 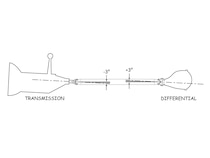 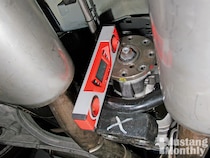 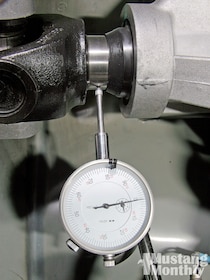 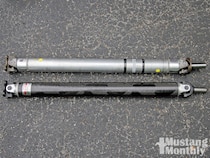 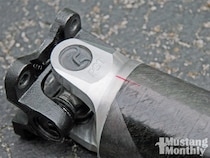 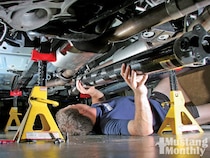 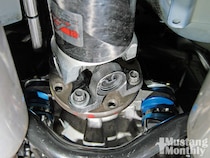