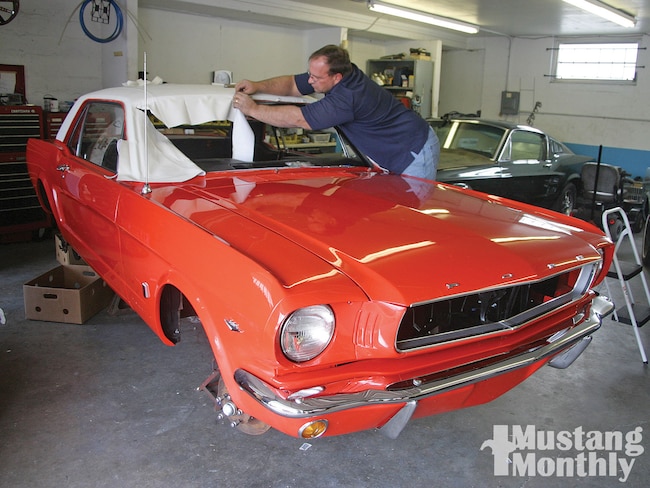 Vinyl tops were one of the original factory options for early Mustangs. Available in black and white for '65-'66, the grained tops added a distinctive, contrasting appearance to hardtop models. Like everything else on older Mustangs, replacement is a fact of life, as exposure to the elements can take its toll on the vinyl material. Fortunately, replacement tops are available for just over $100 from most Mustang parts vendors. The actual remove-and-replace procedure is not that difficult. However, there are some tricks to the trade for achieving a wrinkle-free job, so you may want to employ a professional. Check with your favorite Mustang shop or talk to upholstery specialists in your area. Shops that specialize in upholstery or convertible tops can usually handle vinyl top replacement.

Because moisture can become trapped underneath the vinyl material, you may have to deal with rust on the sheetmetal roof before installing the new top. Minor surface rust can be easily treated. However, major rust repair, which could include actual holes, may require the services of a body and paint shop.

Our '66 Mustang GT came from the factory with the white vinyl top, which has been replaced several times over the years. Currently, the car is undergoing a full restoration at Classic Creations of Central Florida, so owner Merv Rego enlisted Bobby Elen from Lakeland, Florida's J&B Auto Upholstery to stop by to professionally install the new top, which was acquired from National Parts Depot. The front and rear glass was already out, and minor surface rust on the roof had been repaired during the bodywork in preparation for the fresh Signalflare Red paint. If you're simply replacing the top, you'll have to remove the front and rear window glass and moldings (which makes this a good time to repair any leaks), drip rail retainer and moldings (requires drilling out rivets), and the quarter-panel chrome trim, which is attached behind the sheetmetal via nuts, so you'll have to remove the rear seat, interior quarter trim panels, and package shelf for access.

Bobby has been replacing vinyl tops for many years, so he was able to provide us with some interesting tips. On Mustangs that originally came with vinyl tops, you'll find small punch marks in the upper glass channels that were used to line up the seams at the factory. Bobby uses these marks for the same reason when replacing tops. He also pointed out small tacking nails at the bottom of the A and C pillars; these were used to hold the vinyl top corners in place during factory installation. They are an indication that a car was factory-equipped with a vinyl top but aren't used for replacement.

On '65-'66 Mustangs, small aluminum strips were riveted into the driprails to retain the edges of the top. Like most, the strips on our hardtop were broken at the sharp corners over the rear quarter window, and we quickly learned that these strips, not reproduced at this time, are hard to locate. Fortunately, we were able to locate an intact pair at Mustangs Etc. 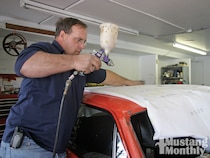 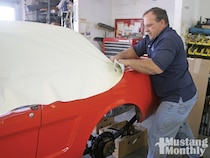 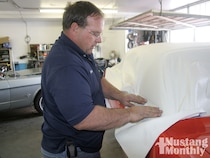 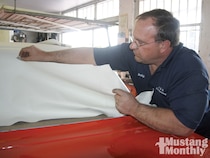 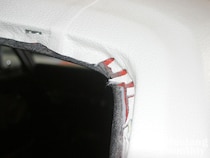 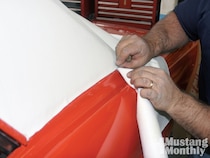