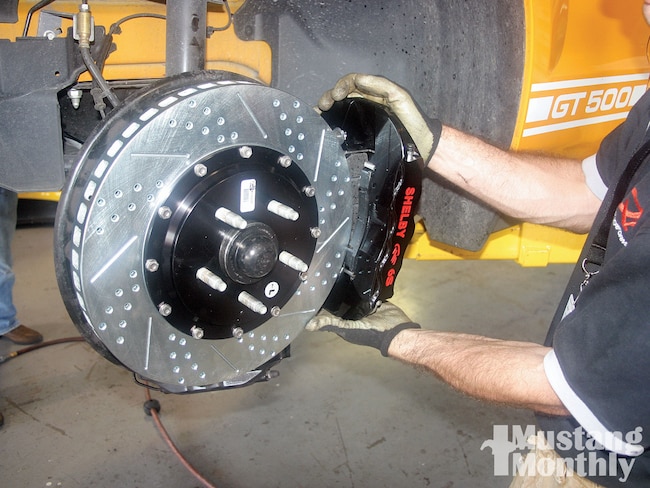 Randy Roberts was perfectly satisfied with the braking performance from his '08 Shelby GT500 convertible. Then someone let him drive a Super Snake with its Shelby/Baer Extreme-Plus front brakes. "The difference in braking was night and day," Randy said. "You think the factory Brembos are great until you drive something with the Baers."

As a principle in the Mid America Ford and Team Shelby Nationals, Roberts primarily uses his Shelby during the open track days at Hallett Motor Racing Circuit. During last year's event, Randy spoke with Baer's Todd Gartshore about performing a before and after test to see how much the Baer Extreme-Plus brakes would improve his GT500's braking performance on the hilly Hallett course. Mike Easley and A.J. Downes from Quantum Performance, a Shelby Mod Shop, handled the swap in one of the Hallett garage bays.

Even though the GT500 front brakes are upgraded over standard Mustang GT brakes, Gartshore points out that manufacturer Brembo was limited in how much they could do for a factory braking system due to cost restraints. With the Extreme-Plus package, the original one-piece rotors and cast-iron four-piston calipers are replaced by Baer two-piece rotors and forged mono-block six-piston calipers.

"The six-piston calipers allow more piston area against the rotor with a larger pad," Gartshore says. "In fact, the six-piston calipers have 18 percent more volume, most of it at the outer edge for clamping at the highest lever point. The 2618 aluminum is what we use for our race calipers because it's more stable than cast-iron."

The 14-inch Baer rotors are the same size as the Brembo factory versions, but the two-piece design weighs 5 pounds less per rotor. They're also zinc-plated, cross-drilled, and slotted.

For an independent opinion, Roberts enlisted George Huisman from Classic Design Concepts to drive the GT500 before and after. After the swap, Huisman noted that he was able to dive deeper into the turns before braking. Roberts also commented on the deeper braking. "At Hallett, the turns are marked with numbered signs for braking reference. In turn one, I had to go for the brakes at the number four mark with the factory brakes. With the Baers, I can wait until the number two sign." 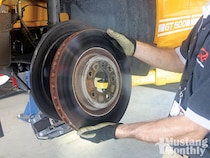 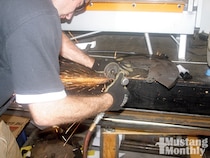 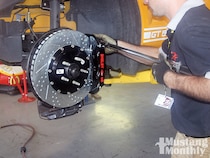 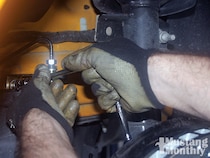 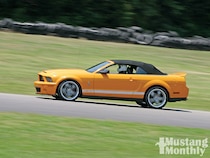 Check out JD Coon's 2008 Ford Shelby GT500! JD made it a point to modify his car for more power in order to satisfy his competitive thirst for more power.

In this tech inspection segment we look at installing aftermarket bolt-in hood lifts. Click here for more details or check out the January 2013 issue of 5.0 Mustang & Super Fords Magazine.

Now you can custom-tune your 'Stang with your phone or tablet with iTSX custom tuning. Click here for more details or check out the September 2012 issue of 5.0 Mustang & Super Fords Magazine.