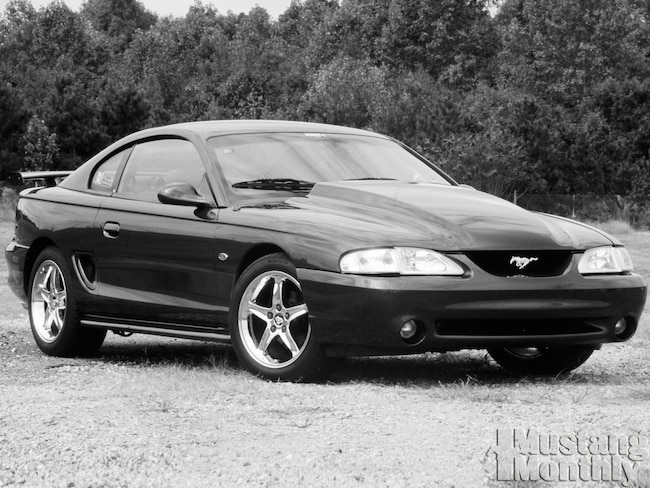 An engine that's probably a bigger sleeper than the vintage 200ci six is the late-model 3.8L Essex V-6. For those of you not familiar with this engine, it resembles a baby Cleveland in appearance-with its broad-shouldered valve covers and wide "V" stance. Fire it up and it sounds like a buzzy European six-popper. Lean on the throttle and it comes on strong-for a six-cylinder engine. When this engine was first introduced as a carbureted V-6 in 1982, thereby replacing the inline-200ci six, it wasn't much to write home about. It lacked torque, it did not impress, and pulling onto the freeway took planning with this anemic mill.

For years the 3.8L V-6 has been an invisible Ford power plant. The smaller 2.3L OHC four-banger has seen more press in performance arenas, due to its optional turbo status in the Fox-body Mustang, Capri, Thunderbird, and Cougar. But it seems as though we haven't given the Essex V-6 the credit it deserves, for performance potential. It has taken someone with vision and imagination to squeeze 325 hp out of this sleeping mill.

In box stock form, the 3.8L Essex V-6 produces 145-150 hp at the crankshaft. According to Super Six Motorsports, that's 0.625 hp per cubic inch or 38.2 hp per liter. There is great potential in the Essex six's design. The symmetrical upper intake manifold, the sizable intake ports, the aggressive exhaust ports, and even the respectable 1.5-inch factory headers make the engine full of potential.

Super Six tells Mustang Monthly that you can modify this six in three stages, depending on your needs. 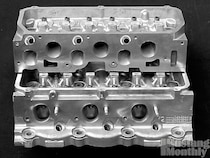 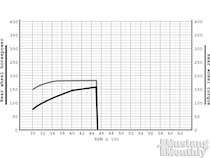 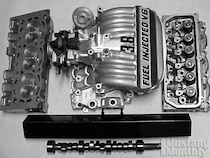 Stage 1 consists of porting the upper intake manifold with 1.5-inch shortened runners and greater plenum volume; a ported lower intake manifold; ported cylinder heads; three-angle valve work; and a custom-ground camshaft, which yields 214 degrees duration at 0.050 inch and 0.483-inch valve lift in a symmetrical pattern. With just these mods, rear wheel horsepower shot up to 155 at the factory 4,500-rpm rev limiter. Allowing for driveline power losses, this adds up to about 186 hp at the crankshaft. That's 41 hp with the camshaft and the head mods-all this with stock pushrods and 1.73 ratio rocker arms. 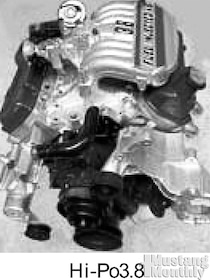 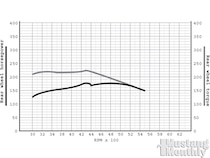 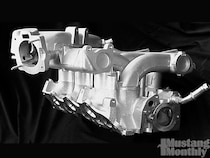 This stage takes us into greater potential with an adjustable fuel pressure regulator; a fuel pressure gauge; and a custom dyno-tuned computer chip to provide optimum ignition and fuel curves, increased rpm and top speed limits, lower fan "on" temperatures, and optimum AODE/4R70W shift patterns. With these simple modifications, the 3.8L V-6 delivered 177 rear wheel horsepower and 212 hp at the crankshaft. That's a 67hp increase more than factory. This maximizes the naturally aspirated potential of the Essex V-6.

Another engine that Mustang buffs may be unfamiliar with is the 4.2L Essex V-6-standard in the '97-'01 F-150 pickup trucks. We learned from Super Six Motorsports that the 4.2L truck V-6 is dimensionally the same as the 3.8 used in the Mustang. This engine differs, of course, in induction and accessory packaging. It is also externally balanced, unlike the 3.8L V-6-which is internally balanced. The 4.2 also has a larger flywheel and clutch for truck use. Your challenge as an Essex V-6 buff is to marry the best features of the 3.8 and the 4.2 for best performance.

When we step up to Stage 4, the Hi-Po 3.8L Power Pack takes on a significantly more powerful personality. Installing a Vortech supercharger, a 75mm mass airflow sensor (MAF), 30-pound Ford Racing Performance Parts injectors, and a 6:1 FMU, boost exceeds 10 psi at 6,000 rpm. The key is safe computer function that won't harm the engine. We want a 12.4:1 air/fuel ratio. With all of this in tow, Super Six was able to pull 305 rear wheel horsepower from the 3.8L V-6. With a smaller Vortech compressor pulley, more than 330 hp is possible.

Super Six Motorsports shows us what can be achieved with the 3.8L Essex V-6. Super Six focuses on the '94-2000 engine because it yields a stronger block and better heads and induction, which make it a better platform for development.

In 1999 Ford began using a biport cylinder head on the 3.8. Super Six is developing Stage 1, 2, 3 and 4 packages for the '99-'01 Essex V-6. Super Six is expecting as high as 400 hp from the Stage 4 package. The biport head employs oval, long (low rpm) intake runners and circular, short (high rpm) intake runners to make the most of the displacement. This head can be installed on '94-'98 engines.

Super Six Motorsports takes the biport design and makes the most of it with porting treatments that include a gasket-match port along the entire runner. Super Six refers to this as "taper" porting, which means the heads are fully ported-with the intake ports finished to 80-grit. The bowl and port divider are blended to smooth out the airflow. On the exhaust side, the bowl is blended and the port is slightly enlarged at the header gasket, with a complete polish job. Supercharged versions get their squish or quench zones beveled to increase combustion chamber volume and lower compression.