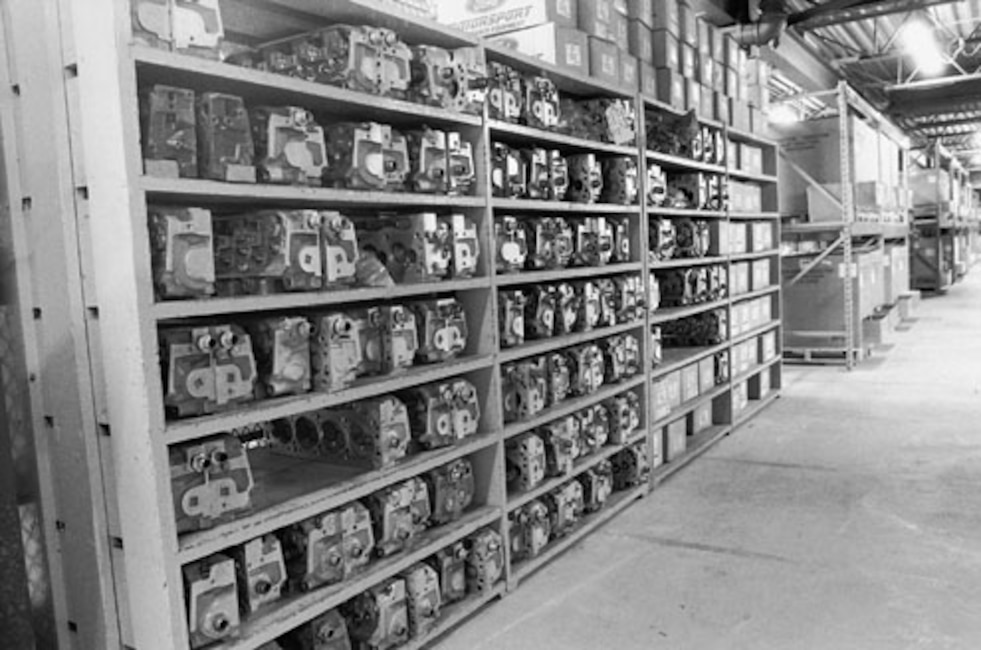 Yates heads! We’ve got Yates heads here! Standing in front of this rack of last year’s heads was kind’a like finding the Holy Grail hidden in that huge warehouse at the end of Raiders of the Lost Ark. The swelling still hasn’t gone down. 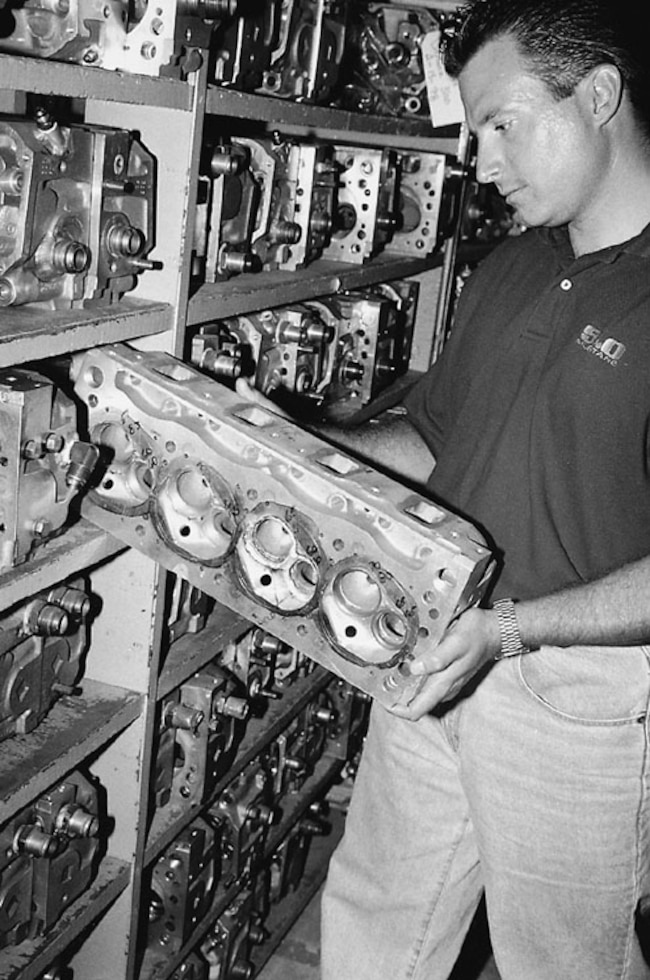 Most of the heads in the rack look grungy from the welding, porting, and cc’ing, but before they’re shipped off to a buyer, Roush goes through them to make sure everything is okay. Here former publisher, Steve Wolcott, is caught in a quiet moment of reverence. Interestingly, the plans for his ‘85 hatchback turned more extreme after our little trip to Detroit. 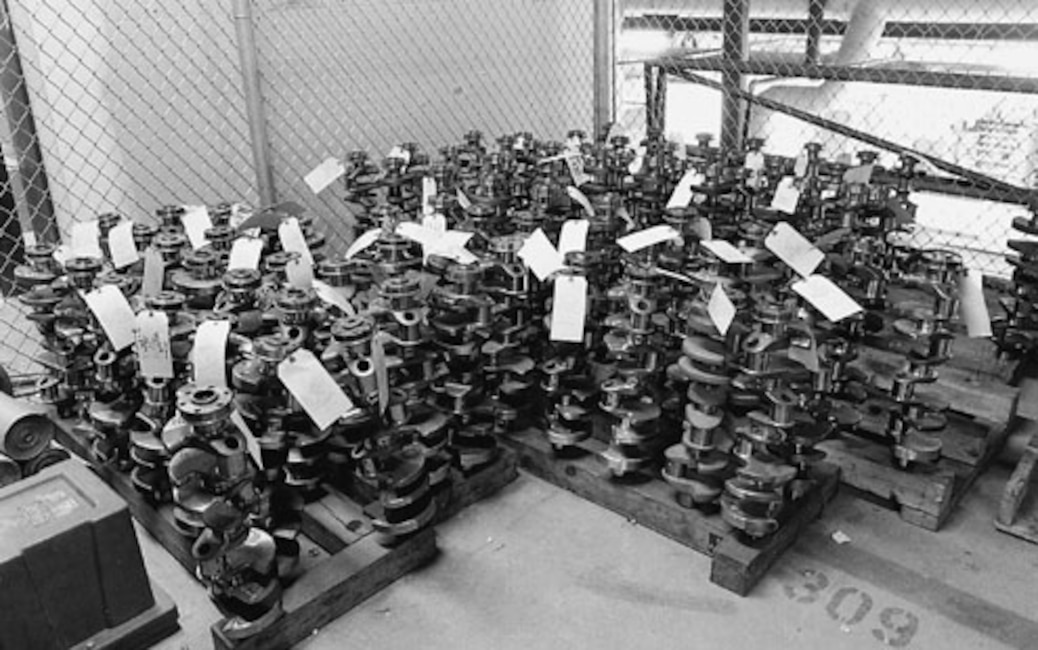 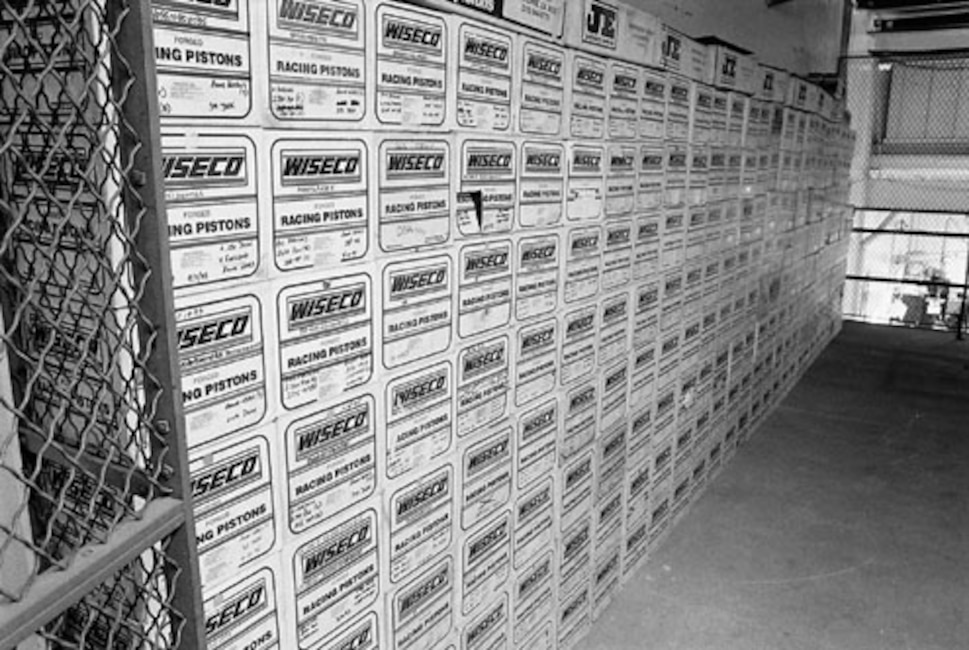 Need some pistons? They’ve got a few. Obviously, if you buy pistons you’re locked into whatever rod length and compression height the team used. 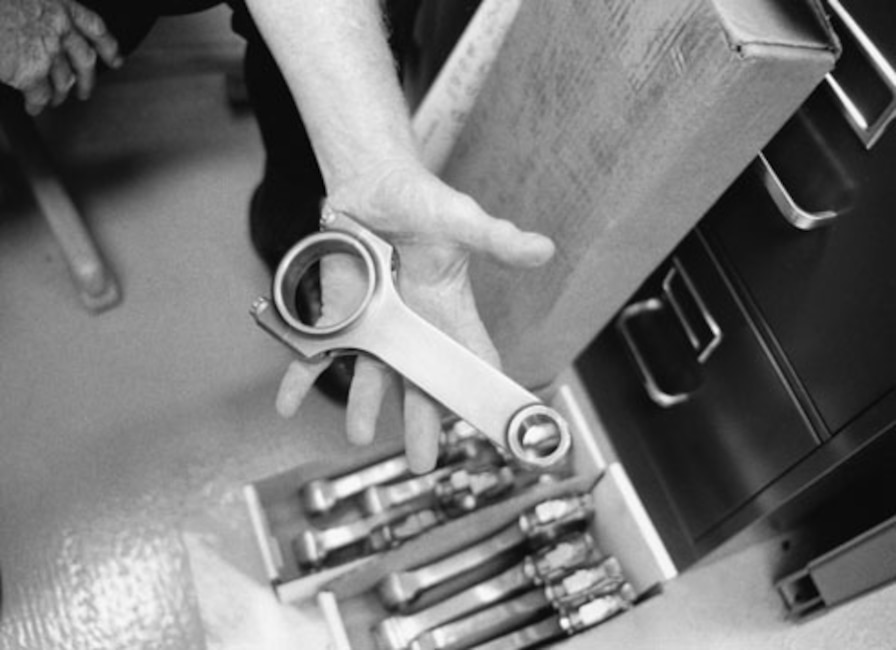 Roush usually uses Carillo steel rods, and replaces them after every race. Cost: $700. 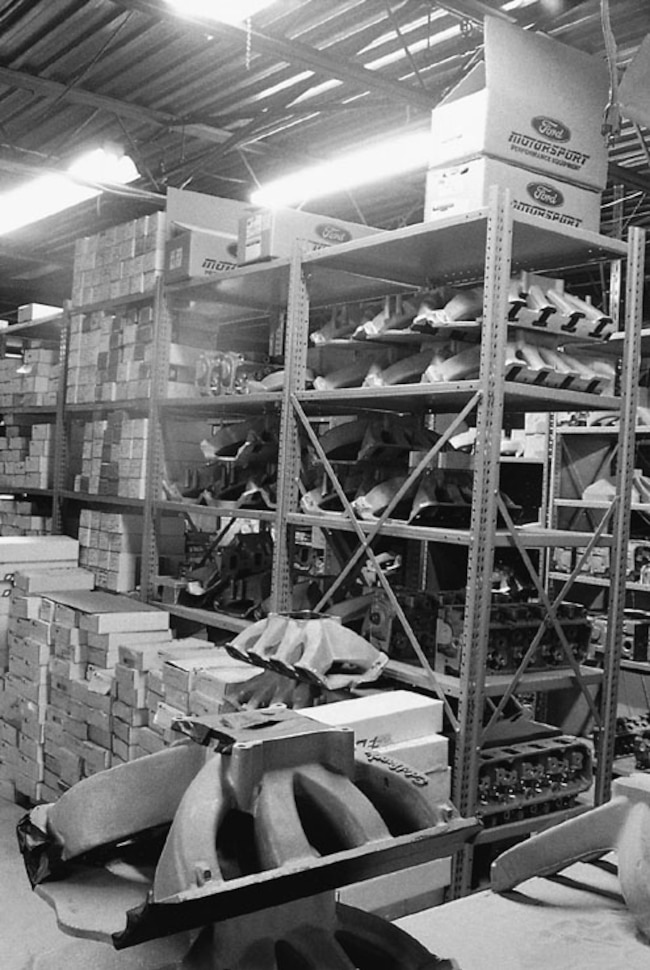 Like cylinder heads, fully ported intake manifolds are the subject of great secrecy and innovation. You can get a heavily modified intake matched to the ported Yates heads. 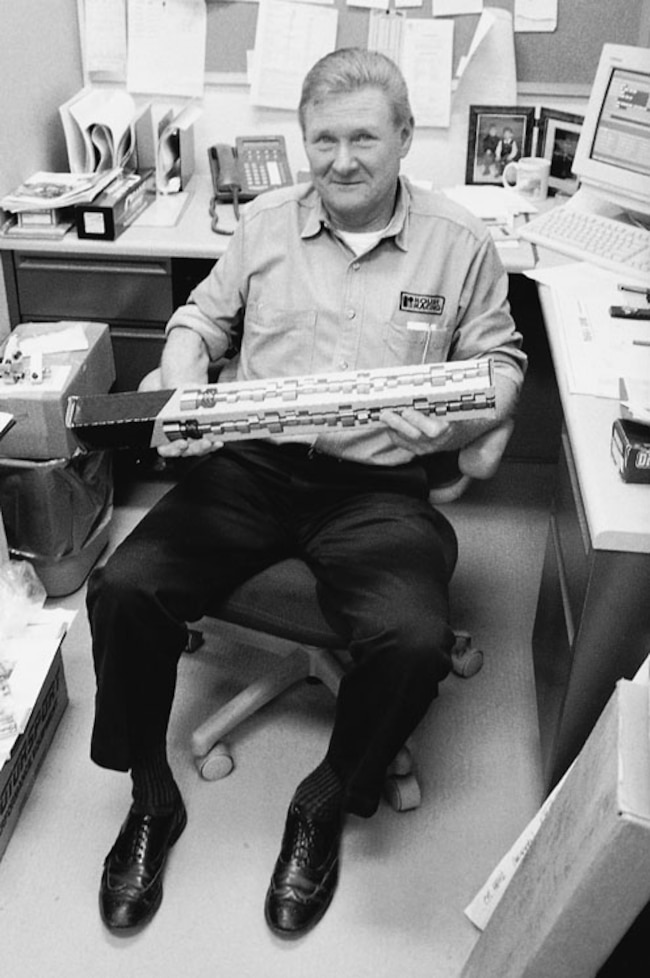 This is Red, the guy you’ll talk to when you call. Red’s a busy guy and, as we found out, he can be brutally hard to reach, so be patient. 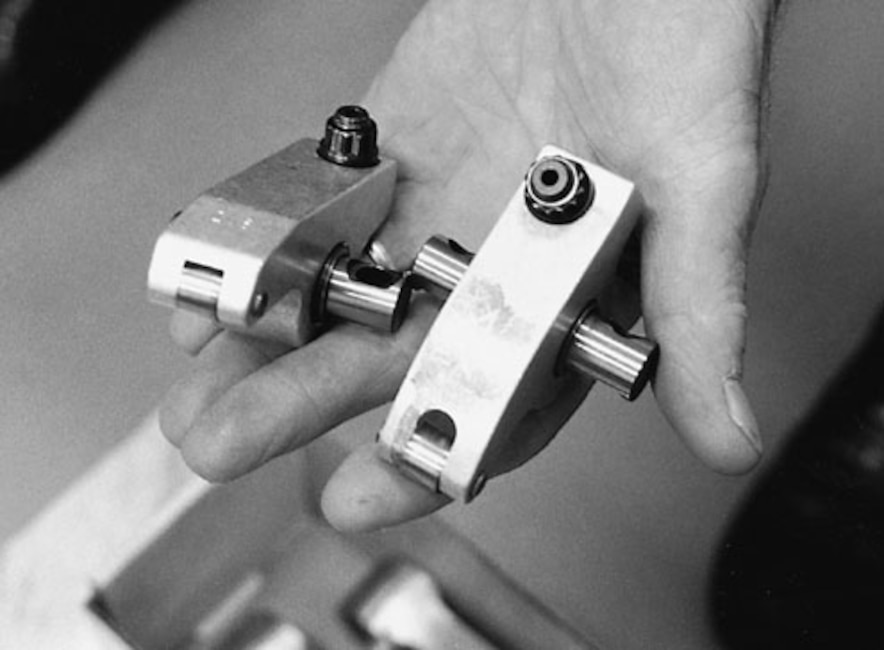 A big expense most beginners don’t think of is in the valvetrain—specifically the shaft rockers required with high-dollar heads. These Jesel rockers usually sell for $1,600 new. Roush gets $700 used. 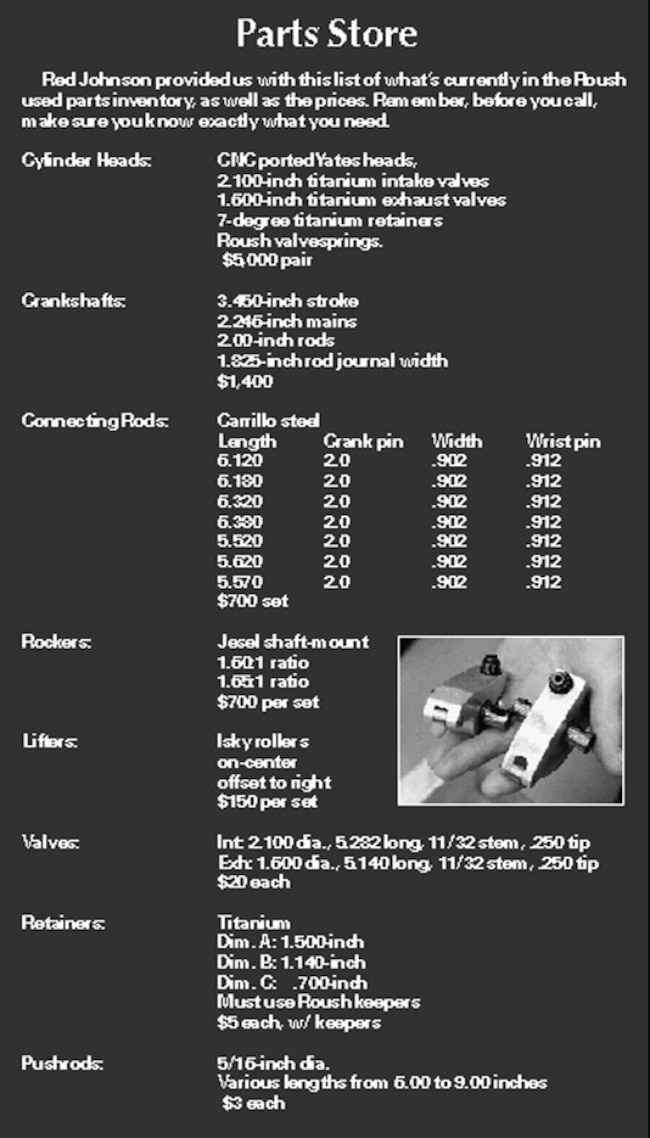 If you've built a legitimate race engine, the real deal--we're talking Yates heads, shaft rockers, and stroker crank--you know how obscenely expensive it is. The parts alone carry a huge pricetag. It requires even bigger truckloads of cash to pay someone knowledgeable to modify those parts and assemble it into a combination that makes big power. If you've never experienced the money pit that is building a race car, you really have no idea. It's a simple fact: The faster you wanna go, the more money you've gotta spend.

But guess what? We've found a place to buy the trickest-of-trick small-block Ford race parts, and for a huge savings over retail. The bad news is the parts are used. The good news is, the parts were used in Jack Roush's Winston Cup and Busch Grand National cars. That has two selling points. For one, you can say you've got the heads off Mark Martin's Cup car, if you're into that sort of thing. Another benefit is that Roush doesn't use junk and the technology is truly state-of-the-art, especially when it comes to the cylinder heads and intake manifolds. You think your local porter is better than Roush's boys?

Here's the scoop. Roush runs a bunch of teams in Winston Cup, BGN, and the Craftsman Truck series, and each team has at least two cars. Factor in all the R&D time, qualifier motors, race motors, backups, and other spares, and the Roush teams go through a lot of parts. But here's the kicker. The parts they relegate to the storage room have not lived their entire useful life. A big-money team like Roush Racing is not about to risk season points and finishing position with a set of rods that have been through a 500-mile race.

But those same rods will probably last forever in the typical 600-800 hp drag race engine--same with crankshafts, valvetrain components, and nearly everything else. An engine is a disposable part of a Winston Cup racecar. At the time of disposal it's still good, just not good enough to risk in a front-running car.

After a race the engine is torn down and rebuilt, usually with all new parts. And instead of just letting all the killer used parts gather dust for years, Roush sells the stuff (as do most of the big teams) to whomever wants it--be it an underfunded Cup team, or you and I with our drag cars. Think there's nothing of interest to you and your race 5.0? Consider this. The typical Roush Cup motor is a 358-incher with Yates heads, a matched intake, a killer crank, Carillo steel rods, and Wiseco pistons. Sounds like a good drag race combo, huh? The BGN and truck engines are basically the same, except they run 9.5:1 compression ratios, compared to the 16:1 or 17:1 that the Cup engines run in restrictor plate races (NASCAR rules dropped compression to a max of 12.5:1 in the '98 season, however). The truck engines even get to run roller cams, so there's another used part up for grabs.

Winston Cup teams guard cylinder head and intake manifold technology more closely than the U.S. government guards Area 51. Ask an engine builder flow numbers and port design and he'll either laugh hysterically or punch you in the mouth. But the escalation of technology and constant research and development make last year's cylinder heads old news, so the teams don't care who gets them. Hence, Roush has racks of fully race-prepped heads and intakes up for grabs.

How much for all these goodies? How 'bout a pair of Yates cylinder heads--professionally ported (we're talking Winston-damn-Cup-quality porting here!) and reconditioned (with valves, springs, titanium retainers, and a killer valve job)--for $5,000? That may sound high, but ask any racer running Yates heads how much he's got in 'em and you'll faint. The shaft rockers required for these heads are normally about $1,600; Roush's used parts go for $700. Basically, you can buy used, but very well-prepped, parts for half what they would cost new.

Getting inside Roush to buy the stuff is as simple as calling Red Johnson, the manager of special engines, at (734) 779-7257. Ol' Red is the guy who keeps track of all the parts and deals with the phone calls. These are all hard-core race parts, so if you're not serious, don't waste your or Red's time. But if you've got plans to run eights, or burn up the local circle track, you'll be hard-pressed to find a better deal on parts of this caliber. And just imagine telling the locals at the track, "Yep, those are Mark Martin's heads right there. I think they're the ones that he won with at Martinsville." Can't you just see the shock in their faces?