We Compare The Dynomax Muffler Line, From Quiet And Inexpensive To Throaty And Pricey 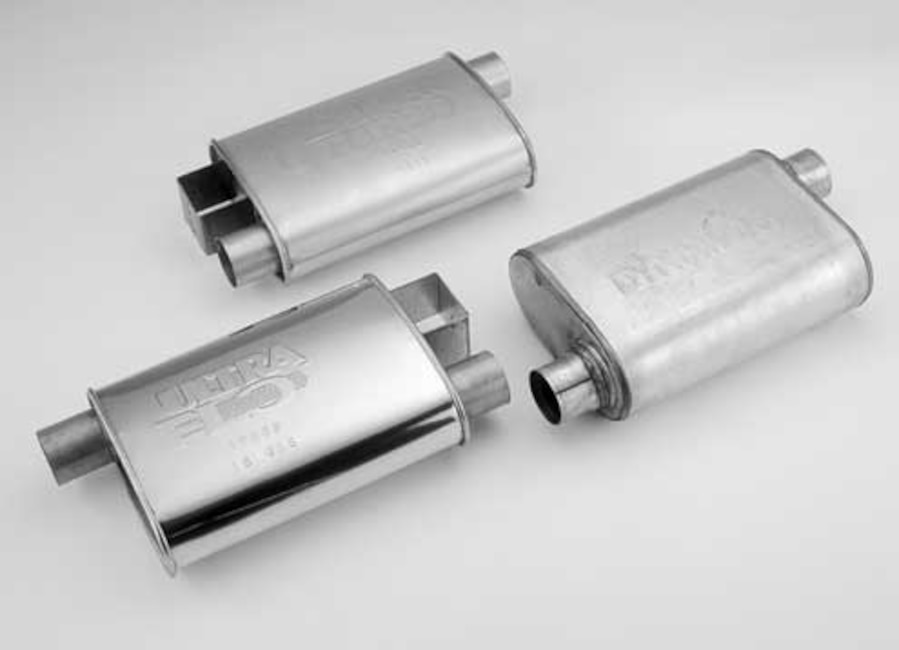 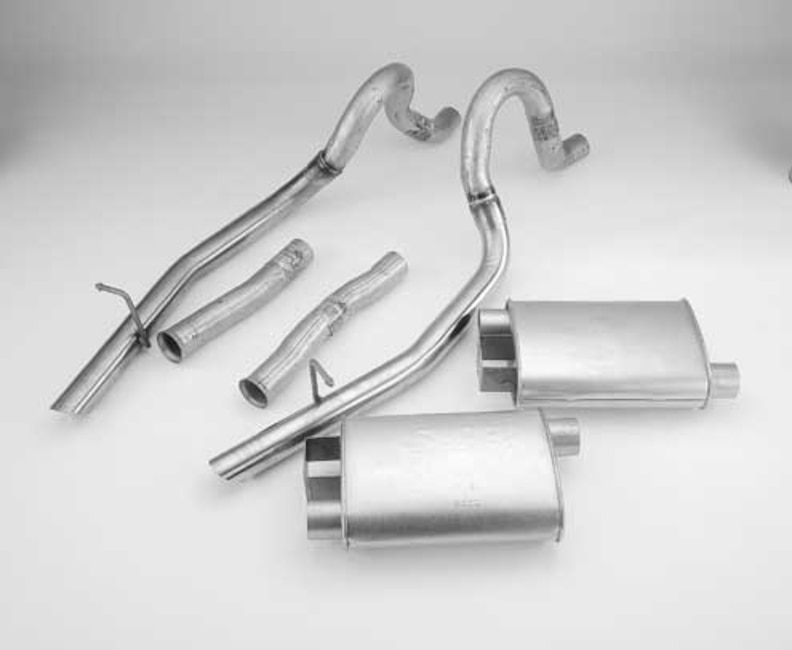 The Super Turbo after-cat in 2-1/2-inch form will provide performance without any additional sound, if every other exhaust component remains the same. Super Turbo systems range in price from $169.99 to $399.99 depending on your Mustang application. The Super Turbo's low price is what gets most people in the door. 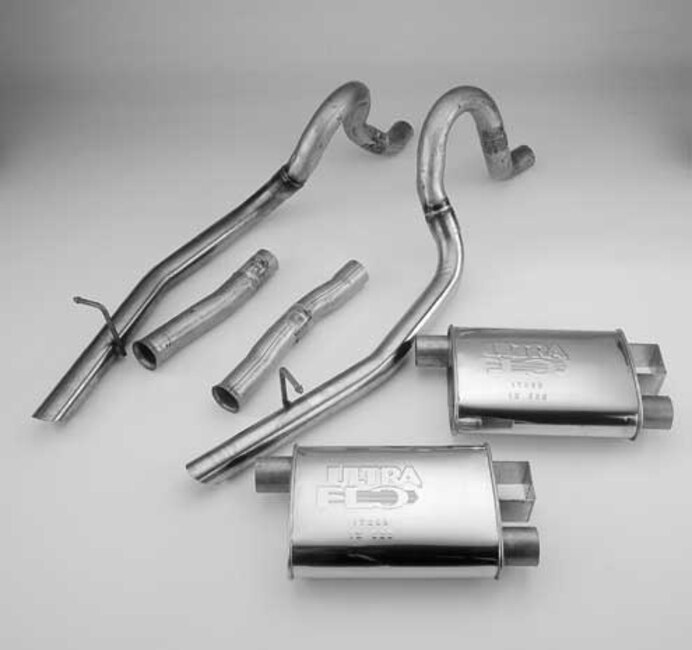 The Ultra Flo SS would be equally at home on the show floor as on the racetrack with its high–chromium-content cover. You’ll pay extra for it, however—up to $125 apiece for an Ultra Flo SS in 2-1/2-inch form, or $319 to $459 for an after-cat featuring the Ultra Flo SS. 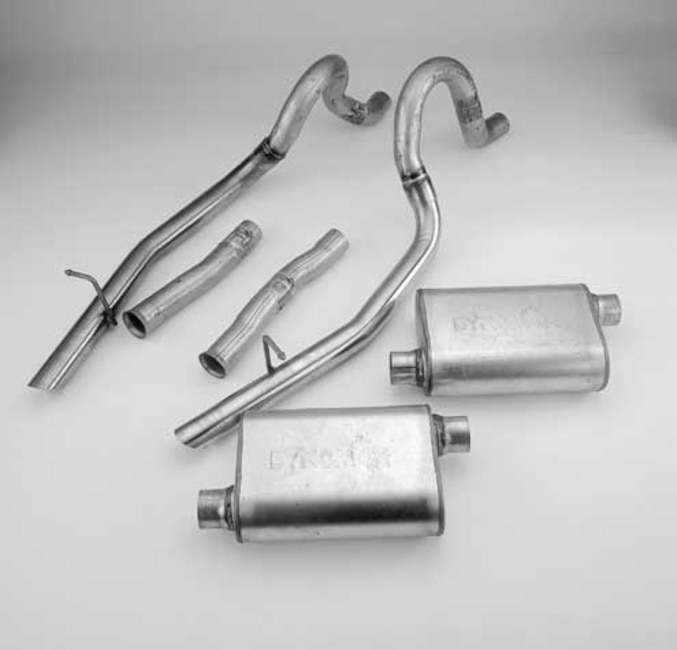 Ah yes, the bad boy of the bunch: the Ultra Flo Welded (formerly the Race Magnum). This makes good power with stock cats, but will outperform its DynoMax counterparts when paired with a high-flow H- or X-pipe, or an off-road equivalent. The Welded muffler will also sound the most muscular of the three. 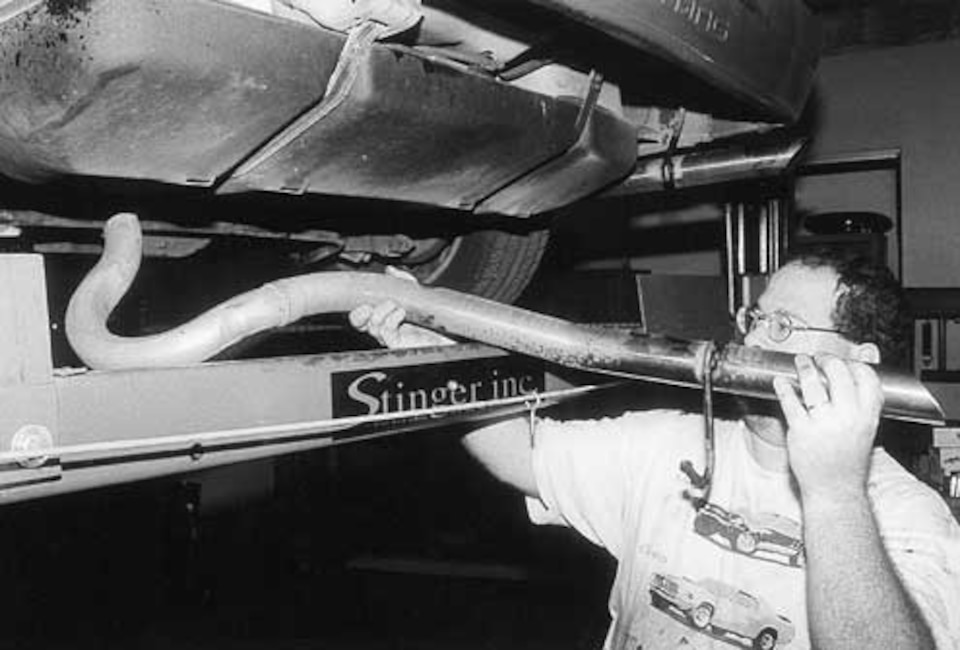 He's not just another pretty face, folks. He's Mark Houlahan, technical editor of 5.0 sister publication Mustang Monthly. Mark "helped" us extricate the stock after-cat and aftermarket mufflers while we held the camera and provided moral support. Actually, since DynoMax makes a lot of the factory exhaust components for Ford, the after-cats went on fairly easily, save for the issues we encountered with the Ultra Flo SS mufflers. 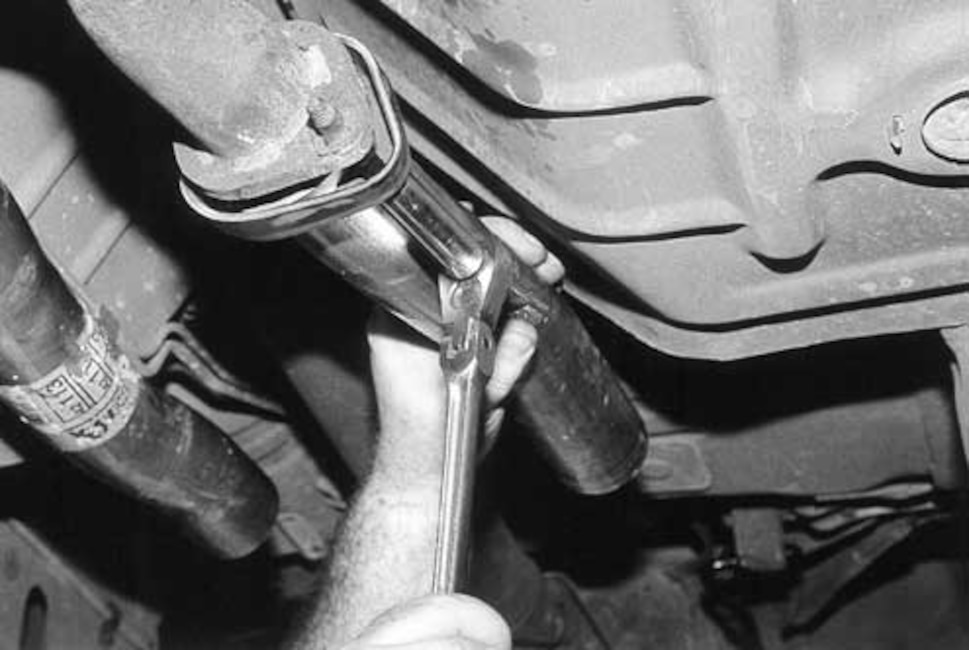 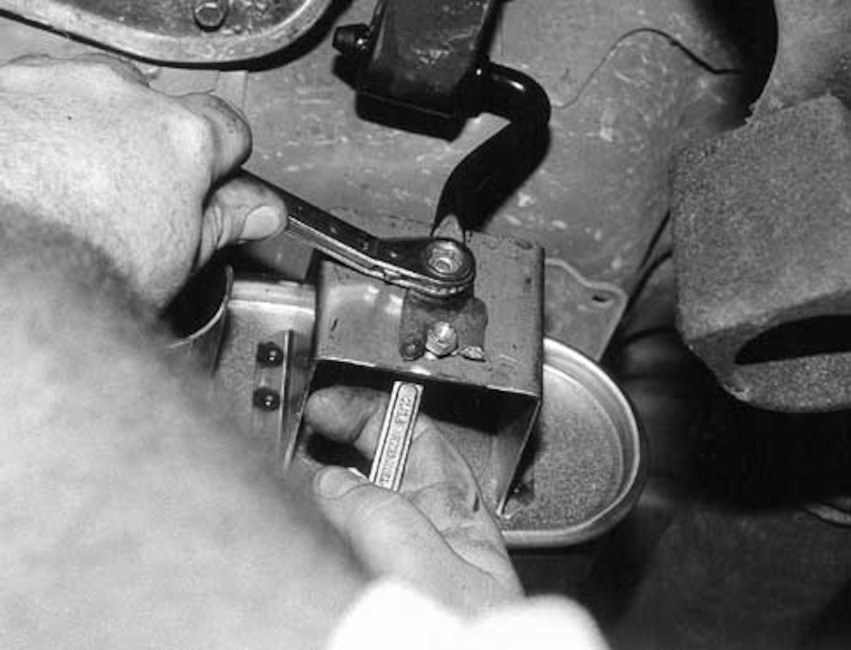 For the Super Turbo and Ultra Flo SS mufflers you can use small nuts and bolts to attach them to the factory hangers. 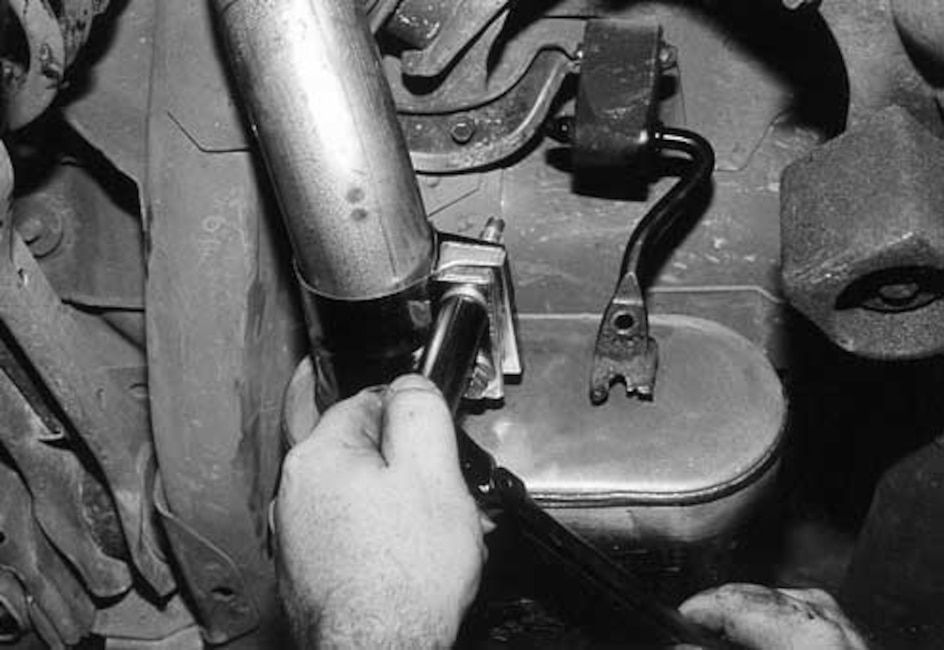 The Ultra Flo Welded muffler doesn't feature the mounting brackets, so you'll have to have a muffler shop weld this muffler in place. We're using these band-style clamps to hold the mufflers in place while we do our back-to-back comparison. These clamps from DynoMax really come in handy in tests such as this when we need to get the mufflers off without beating them into submission. 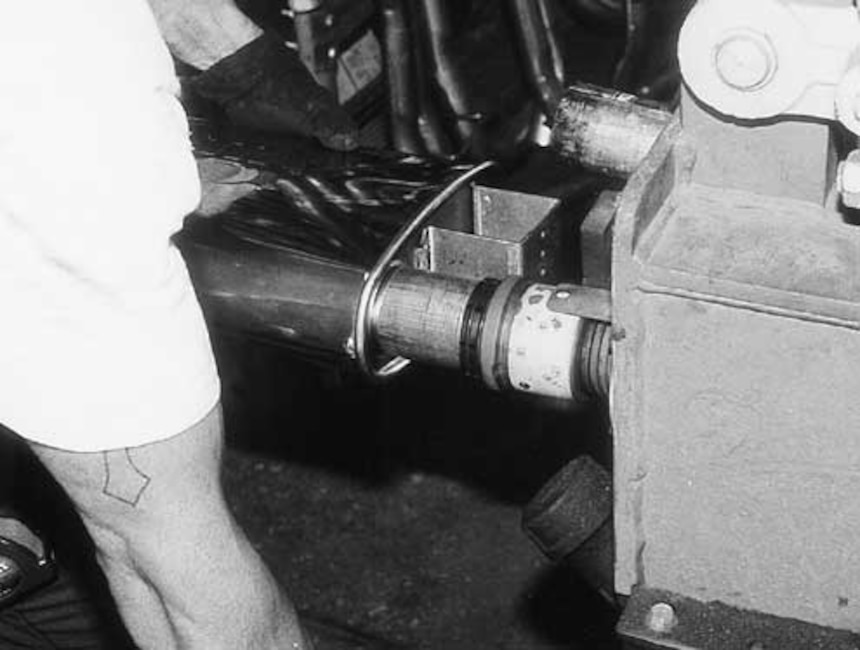 To have our mufflers welded in place, we visited The Muffler and Exhaust Center (TMEC) in our Lakeland, Florida, hometown. TMEC carries and installs DynoMax exhaust components. The technicians had to open up the Ultra Flo SS mufflers to get them to play nice in the after-cat sandbox. This is not uncommon when you get an after-cat system, as we've encountered this problem with several others we've tested. 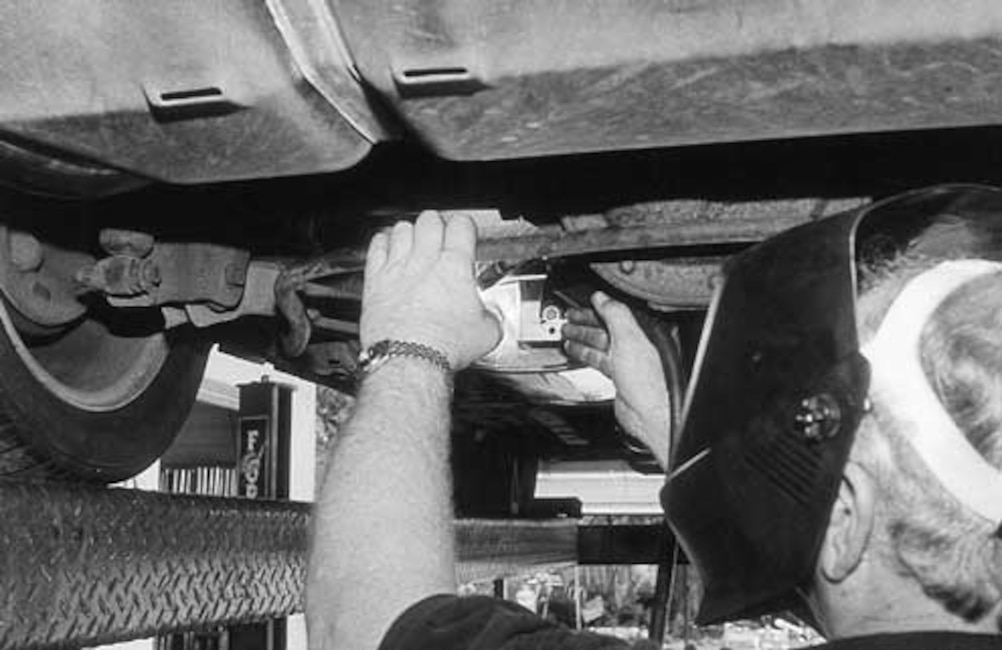 TMEC set our Ultra Flo SS mufflers in place, made sure the tailpipes were even, and welded them in place for us. Yes, it does look like he's welding his hand to the sway bar, but we can assure you he's actually welding the muffler in place. 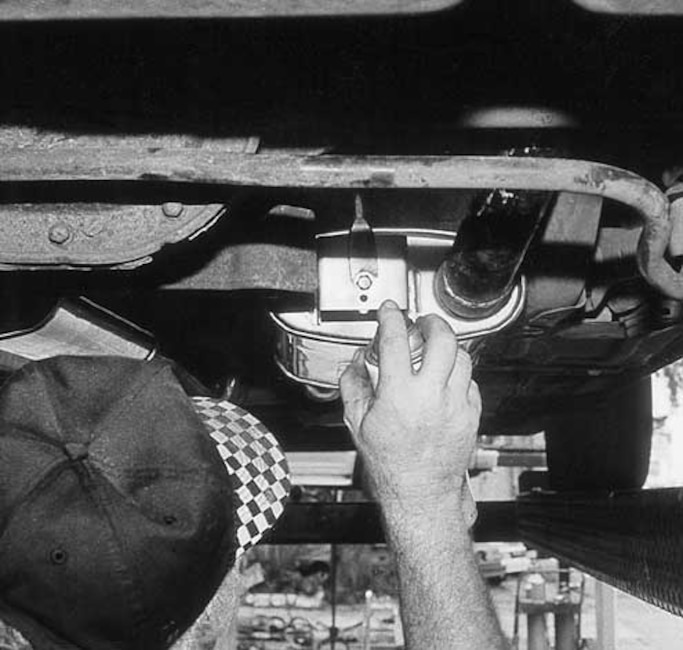 To protect our welded exhaust components from corrosion, protective paint was sprayed over the areas where he welded. 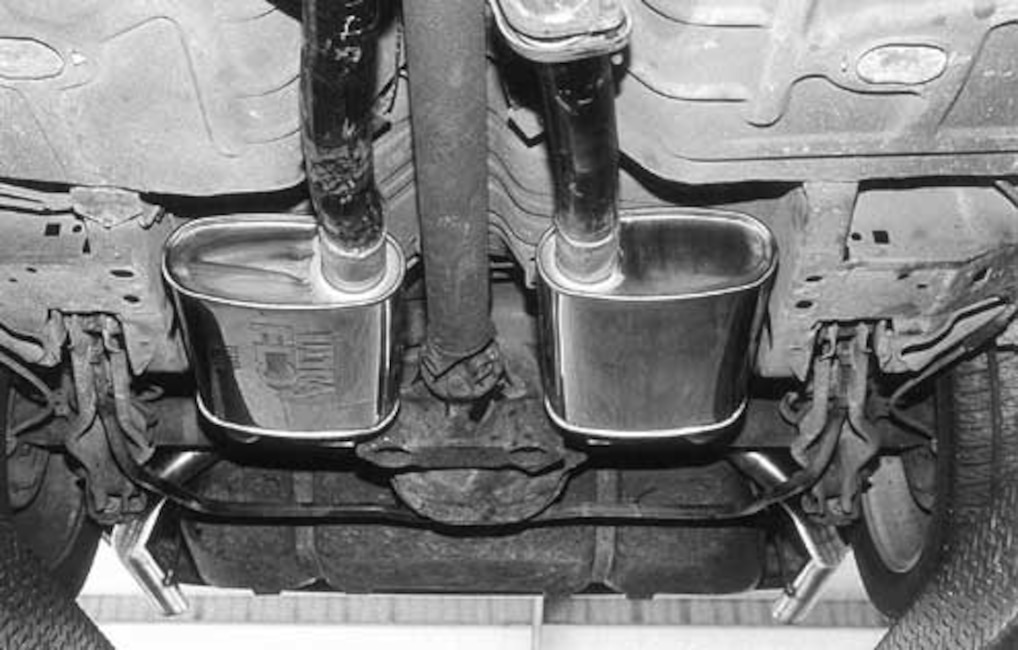 Our DynoMax 2-1/2-inch after-cat with Ultra Flo SS mufflers fit perfectly on our '91 LX coupe and rewarded us with a more authoritative sound and a larger pipe diameter to help prepare it for future engine mods.

Back in the day, a new muffler for the 5.0 Mustang came out what seemed to be every other week. Promises of more horsepower and a more authoritative sound came along with the more than $120 you decided to let loose from your wallet for a pair of performance mufflers--not including installation, of course. These days, there are numerous mufflers available for the Mustang. Choosing the right one for your ride is the trick.

We recently had the opportunity to test DynoMax's Super Turbo, Ultra Flo, and Ultra Flo Welded (formerly Race Magnum) mufflers against each other in sound quality, price, and performance.

Since our test car already boasted aftermarket mufflers, we looked to Paul's High Performance in Jackson, Michigan, for dyno numbers. Paul and Ronda Svinicki's shop is just two miles from the DynoMax facilities, and they have performed numerous tests on these mufflers during the past few years.

Our sound test car was a '91 LX that was surprisingly stock save for a K&N, removed silencer, and the aforementioned mufflers. As you could probably expect, there was a drastic difference in sound between the three mufflers. The Super Turbo is super quiet, while the Ultra Flo and Ultra Flo Welded are close in the amount of sound they develop.

The sound emanating from the Super Turbos was barely noticeable. It was designed to offer a mellow tone with its fiberglass matting design within the muffler case. They were quieter than the aftermarket mufflers we took off the car.

As for the Ultra Flo SS muffler, it's the prettiest muffler we've ever seen. It even comes wrapped in plastic just like a new car. Consequently, it's one of the more expensive mufflers on the market. The Ultra Flo SS is a straight-through design with a high-chromium-content cover (which accounts for the pretty exterior) and a CRF (continuous roving fiberglass) design within the muffler to help produce a deep, powerful tone. With our car we did notice an increase in sound, but we also experienced the signature 5.0 Mustang drone between 1,700 and 2,200 rpm.

As of this writing, the Ultra Flo Welded is not available as part of an after-cat system. This is probably because the Welded muffler is not a bolt-on as are the other two. There is no hanger supplied on the muffler body itself, so you must weld the factory hanger onto the muffler, which is no big deal for a muffler shop.

So there you have it--three different mufflers with three different sounds and price points, all from the same manufacturer. Any way you slice it, all three will improve both the horsepower and sound levels of your Mustang if you're still running the stock exhaust.

This 1983 Ford Mustang LX owned by Tony Jones is driven on the street and has run 6.89 on the motor in the eighth-mile and 6.50s on spray with traction issues. Tony found this ’83 Mustang LX sitting in a field in Virginia about four years ago and thought it would be a great car for the engine he was building.

Check out Wes Duenkel's 1983 Ford Mustang GT! Wes was determined to visit the Road America course but had limited financial resources and technical knowledge. Sometimes, trial and error is the way to go!

Check out this quick guide on how to replace a Fox-Body convertible top. Click here for more details or check out the June 2012 issue of Mustang Monthly Magazine

A simple kit from latemodel supply can make your Fox-body convertible window repair a breeze. Click here for more details or check out the May issue of Mustang Monthly Magazine