10 Best Mustangs To Own And Drive

If you could pick 10 Mustangs to park in your garage, what would they be? 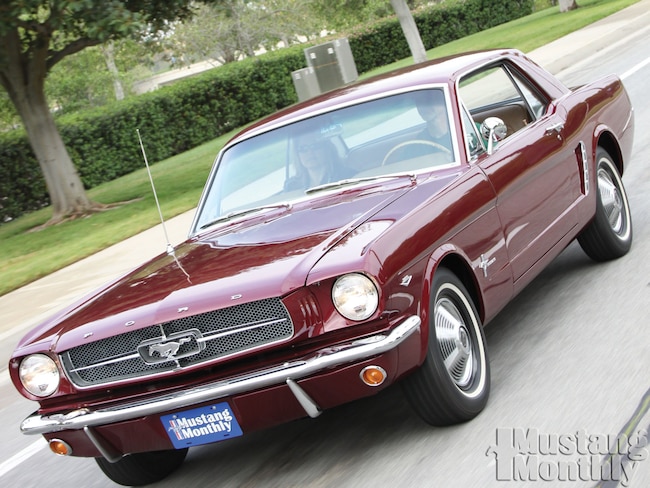 Regardless of how we look at nearly a half century of Mustangs, there have always been the ones that we'd like to own and drive. Sometimes they come to mind while working in the garage, taking a shower, or pushing a lawnmower. Other times, it's a gut reaction at a car show or on the freeway. Regardless of how we spot them, they're always prime examples of a great breed we'd like to have nestled neatly beneath the rafters.

What makes us want these Mustangs so badly? Most of the time, it's the way they look or how they're presented. Some of it comes from the way they sound—a throaty roar or the soft chatter of mechanical tappets from a 289 Hi-Po or Boss 302. With others, we are fond of rarity—we just don't see them that often—such as a '65 Shelby GT350 or even an odd-duck six-cylinder California Special. Some are brute powerhouses, like the 428 Cobra Jet Mach 1 or Shelby's newer GT500, especially when decked out as a Super Snake.

You can bet our top 10 best Mustangs is going to be different than your list because how each of us feels about Mustangs is what makes the world go round. We'd like to hear from you about your 10 Best and see how we compare. Drop us a comment or tweet with "10 Best" as the subject line or #tenbest hashtag.

We couldn't do a 10 Best and leave this one out. There's something about a '65 Mustang hardtop just the way Ford presented it to us on April 17, 1964—absolutely stunning here in Vintage Burgundy. Although Ford's sporty, new Mustang wasn't much on options and appointments that first year, the big attraction was its wonderful simplicity. It's the same today: simple, elegant, and affordable. Twist the key and ease out on the clutch to get that sweet whine of a smooth-shifting Borg-Warner T-10 four-speed coupled with the 289's soft purr through a transverse muffler and stubby tailpipe. The '65 Mustang is an American original. It remains a rush of excitement we'll gladly take home. 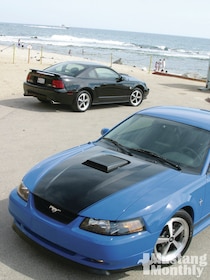 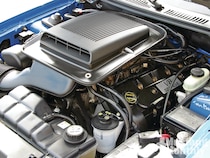 Skeptics said it would never happen. The '03-'04 Mach 1 was the rebirth of a great Mustang name at a time when Ford wasn't sure of what to do with the Mustang. In 2002, Team Mustang decided to tease the public with a concept car called Mach 1, which was spurred by enthusiasm for the limited-edition Bullitt in 2001. When Ford saw how excited people were about the Mach 1 concept, production was dialed in for 2003 and again in 2004 with refinements. The '03-'04 Mach 1 would do its name and legacy justice with a powerful 4.6L 32-valve overhead cam V-8, making it the '69-'70 Cobra Jet Mach 1's equal and more. We will gladly drive this gentlemanly beast home and tuck it in the garage thanks to all the things we like about the reborn Mach: aluminum 4.6L DOHC V-8, 10:1 compression, 265-horsepower, five-speed, 3.55:1 cogs, knitted sport vinyl bucket seats, retro Magnum wheels, and Mach 1 graphics. The '03-'04 Mach 1 is a short-lived chapter in Mustang history but certainly memorable.

We picked this one because it was a model year that kept the Mustang name alive. Ford sold 369,336 Mustangs for '79, a sales number that Ford marketing people would give anything to see today. What's more, it was a radically different Mustang penciled out by legendary Ford stylist Jack Telnack. The '79 model year can be considered an irony because you'd think the limited-edition '79 Indy 500 Pace Car would have been produced in more limited numbers. It wasn't. Ford built 10,478 Indy Pace Car units at its Dearborn and San Jose plants, not including the three actual pace cars that appeared at the 1979 Indianapolis 500.

At the time, the '79 Mustang Indy Pace Car was the most exotic pony car produced. Two engines were available—a carbureted 2.3L Turbo four or the 302ci two-barrel V-8. Most were 2.3L Turbo equipped. Right off the assembly line, these cars were great fun to drive. Reliability issues with the turbo cars made them used clunkers in short order.

What makes the '79 Indy Pace Car a keeper is its unique position in automotive history—big production numbers with one on every corner, yet quite rare 31 years later. It is the first-class restorations and low-mileage original time capsule cars we see today that make us want one as a cool driveway and car show conversation piece.

One year before the all-new '79 Mustang, Ford introduced the '78 Mustang II King Cobra as a last-minute Mustang sales stimulator. We like the '78 King Cobra for its unique features that made it a stand-alone model during a unique chapter in Mustang history. Just 4,971 King Cobras were produced, employing special features like ground effects, rear spoiler, lacy-spoke aluminum wheels, heavy-duty suspension, King Cobra graphics, 5.0L V-8, either four-speed manual or Select-Shift automatic transmission, reversed hoodscoop, and a plush interior with brushed aluminum appointments, full instrumentation, and digital clock. If you've never driven a King Cobra, you don't know what you've been missing because these cars are great fun to drive. Where they fall short is power, like most anything produced in the late 1970s.

For those of us who remember these cars when they were new, the SVO was the most advanced Mustang ever produced when we had them as press vehicles early in 1984. It was surreal because performance cars from Detroit weren't supposed to happen again and here they were—the best handling Mustangs ever, coupled with intercooled, turbo four-cylinder power, bolstered bucket seats with adjustable lumber support, five-speed, four-wheel disc brakes, performance suspension with Quadra-Shock in back, dual-plane rear spoiler, cool ground effects, a unique fascia with fog lamps, and an offset hoodscoop, just to name a few of this limited-production Mustang's great features. We will take Mustang SVO and hit the road for work, play, or vacation. Ford took what it learned from the SVO and put it to practice on the terrific high-performance Mustangs to follow.

It is generally accepted that the '69-'70 Mustang with either a Q or R engine code is the honored and widely respected grandfather of Mustang muscle cars. Though the 428 Cobra Jet was introduced on April 1, 1968, it wasn't until the '69 Mustang grew hair on its chest with a slippery SportsRoof body that the CJ had an image to go with its power. Although the Cobra Jet was available in all three body styles, it was the SportsRoof that did this engine justice along with a new name—Mach 1.

Even if we don't have room, we will find space in our garage for this one and the chance to flex its muscle on a Saturday night.

When Ford insiders declared the Mustang name all but dead, a tough east Detroiter and Ford executive, John Coletti, stepped up and changed their perception of Ford's flagship nameplate. Coletti convinced them he could save the Mustang and did. With a shoestring budget, key staffers, an old Montgomery Ward auto service center building in Dearborn, and a ton of street tenacity, Coletti and his Team Mustang went to work creating the SN-95 Mustang for '94.

In the fall of 1993, Mustang enthusiasts in more than 100 cities got their first look at the new '94 Mustang. The SN-95 saved the Mustang name and got Mustang its sales numbers back after depressing performance in the early 1990s. When we first drove the SN-95 that fall, we liked the way the car felt—solid, predictable, and void of cowl shake. The convertible was especially pleasing. Some 15 years later, the first Fox redesign remains a personal favorite.

Nineteen seventy-one is a strange irony because it was both the beginning and the end. It meant the end of a memorable era of muscle cars and the beginning of a period of emission-strangled, fuel-stingy automobiles that would be with us for more than a decade. It meant saying goodbye to the all-American muscle car, and we did that in 1971. When we considered the '71 Mustang for our 10 Best, it became a toss-up between the Boss 351 and the 429 Cobra Jet. The Boss 351 wins because it yields the crisp sound and performance of its predecessor—the '69-'70 Boss 302—only with more power and torque. Most appealing are those mechanical lifters, throaty Cleveland heads, and the long arm of the 351C's added stroke.

In truth, the '71 Mustang was neither drag car nor road racer. It was a road-going Mustang designed for the open highway. What made the Boss 351 different was its high-revving Cleveland, close-ratio four-speed, and 3.91:1 gears. With factory drag racing gears, you could show off with your Boss 351 around town but suffer the consequences of those low gears when hitting the open road. No matter how you look at the Boss 351, it's a terrific Mustang with its long hood and short deck—and a reminder of how short lived some things can be.

Ford kept the lid on the 428 Cobra Jet until the 1968 NHRA Winternationals in Pomona, California. It began with 50 Wimbledon White fastbacks with dog-dish hubcaps, produced at the Dearborn Assembly Plant in December prior to the race and followed by the distribution of these 428-powered rocket ships to professional Super Stock drag racers around the country. The Cobra Jet Mustangs promptly changed public perception about big-block Mustangs.

Ford introduced the 428 Cobra Jet engine as a Mustang option on April 1, 1968. Carroll Shelby followed suit with the CJ-powered KR version of the '68 GT500. KR stands for “King Of The Road,” a name Chevrolet intended for a limited production Camaro. Shelby got it first, and the GT500KR became one of the best-driving, best-performing Shelbys of all time.

Regardless of your picks for Top 10 Mustangs you'd like to own, we find it impossible to resist the S197 '05-'11 Mustang. When Ford teased us with those two-seat S197 concept cars in 2002, we looked at all their nuances and said, “No way is Ford going to give us a production car this good.” When those first production cars came our way for '05, it was surreal. Those first '05 Mustangs resembled a '67-'68 coming at you and a '69-'70 heading the other way. That's when we were positive Ford had a winner that would both please and sell. Later, Carroll Shelby and Ford reunited to build the most powerful Mustangs ever.