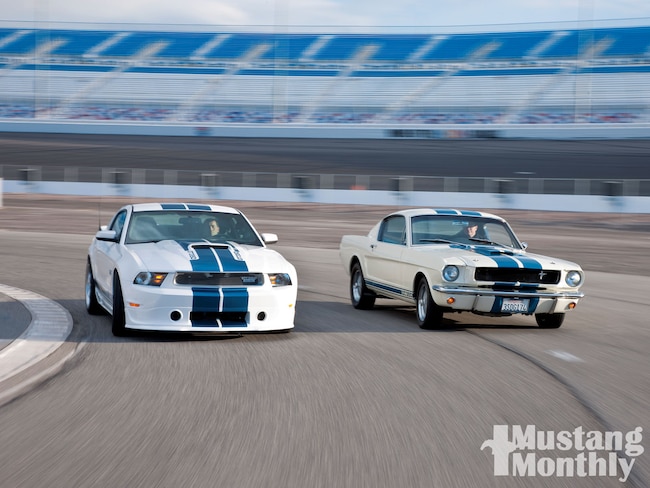 You knew it had to happen sooner or later. After the past half-decade of GT500s, Hertz cars, Shelby GTs, and Super Snakes, Carroll Shelby has dusted off his original and most famous Mustang moniker of all for a brand-new 2011 version of the fabled GT350. And like the original, it will have more horsepower than the standard Mustang GT (much more this time around) and it will be built at Shelby American.

Yes, you read that right. This is the first car from the new Shelby American, formerly Shelby Automobiles. According to Carroll Shelby, reverting to the original Shelby American name, as used from 1962 to 1969, will better connect the company's current vehicles to the historic Shelby vehicles of the past, including the GT350.

The GT350 name is special to Carroll Shelby. He remembers how he came up with it for his performance version of the '65 Mustang Hi-Po fastback: "We had about 12 meetings with Ford to name the car," Carroll told us. "I finally asked someone how far it was to the building across the parking lot. He said, 'About 345 feet.' So I said, 'It's the GT350-we don't have enough time or money to keep discussing it.'"

Timing had a lot to do with holding back the GT350 name. "Right now is the right time for a new GT350," said Shelby American president Amy Boylan. "We wanted to wait until Ford came out with the upgraded performance for the Mustang GT (412hp from a new 5.0-liter engine for 2011-see page 16). And it's a 45th anniversary model, so everything is aligned perfectly."

The original '65 Shelby GT350 was introduced to the automotive press at Riverside Raceway on January 27, 1965. The 2011 GT350 was slated to be introduced almost exactly 45 years later, on January 18, 2010, during the Barrett-Jackson Collector Car Auction in Scottsdale, Arizona, where the first orders will be taken.

Like the original, all 2011 GT350s will be white with Guardsman Blue stripes and manual transmission, in this case a new six-speed. However, unlike the originals, which were basically race cars for the street with loud side exhaust and no back seat, the 2011 version showcases modern performance technology. In '65, the GT350's Cobraized small-block boasted 35 horsepower more than the Mustang's regular-production 289 High Performance engine. This time around, thanks to Ford Racing's Whipple supercharger, the GT350 will sport nearly 200 more horsepower than the 2011 Mustang GT's new 5.0-liter powerplant.

"To be honest, we don't have the final power numbers yet," Boylan confessed in late December. "We're hoping for 600. In fact, Carroll is demanding 600."

As you'd expect from a car with such a performance heritage, the new GT350 will be equipped with the latest handling and braking technology. Shelby American's Vince LaViolette used his experience in developing post-title Super Snake and Shelby SR packages to add a Ford Racing suspension plus caster/camber plates for precise alignment. Brakes are from Baer, incorporating 6-piston front calipers and Eradispeed rear rotors, both cooled by functional ducting.

For the exterior design, Boylan recruited her old friend Larry Woods from Mattel. A Hot Wheels designer for 40 years, Woods worked with LaViolette to create the GT350's unique front fascia, hood, side rockers, and rear fascia, all of which will be supplied by Classic Design Concepts. "It was a great team effort," Boylan says. "It looks retro but still looks new and modern. The thing we're most excited about is that it incorporates all of the greatest elements from Carroll's best Mustangs of the 1960s - things like the '65 R-Model front fascia, '67 hood scoop and grille, and '69 center-exiting exhaust." 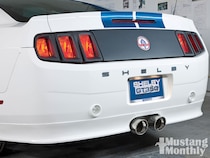 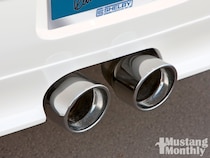 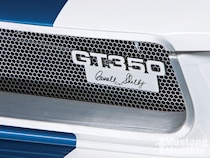 Boylan is especially proud of the unique Borla exhaust system, which ends with a pair of 3 1/2-inch round tips at the center of the rear valance. "Borla out-did themselves with this one," Amy says. "They're artists when it comes to exhaust quality and sound. They gave us just the right rumble. I was walking through the building when they started the GT350 and I thought it was one of the vintage cars."

Boylan points out that the front fascia on the GT350 prototype has a three-piece front fascia, but it'll be one-piece for production. Likewise, the 19-inch wheels, made by Cragar, the same company that manufactured the optional five-spokes for the '65 GT350, will be slightly revised for production to clear the Baer six-piston calipers. Shown here in white, the production calipers will be nickel-plated to match the wheels

Woods treatment at the rear, with a black-out center panel, lessens the angular appearance of the new Mustang's taillights, something most enthusiasts will welcome. Don't be surprised if the rear fascia, along with other GT350 components, show up in future Shelby Performance Parts catalogs.

Boylan says the interior is a throw-back to the '69 Shelby, with black high-back buckets with red stitching along with a red, white, and blue insert. "GT350" is embroidered in the seat back with Carroll Shelby's signature in the head rest. Also included are GT350 sill plates, dash plate with the car's sequential serial number, and an A-pillar gauge package with fuel pressure, oil pressure, and boost gauges.

Something else that the new GT350 shares with its predecessor is the fact that it will be built at the Shelby American facility in Las Vegas, just like the earlier GT350s were assembled at Shelby American's hangar at the Los Angeles airport from 1965-1967. There are two ways to order a 2011 Shelby GT350. Thanks to Shelby American's relationship with Ford, you can order one from your Ford dealer, who can have the car drop-shipped at Shelby American for the installation of the $33,995 GT350 package (over the cost of the Mustang GT). Shelby will then ship the car back to your dealer for delivery. Or you can buy a white 2011 Mustang GT with the six-speed manual transmission and ship it to Shelby American yourself, much the same as GT500 Super Snake conversions.

So what does Carroll Shelby think of the latest rendition of his GT350 "I like it a lot," he says. "It has enough of the old and enough of the new."

That is particularly pleasing for Amy Boylan to hear. "GT350 is the most special of his Mustangs. Carroll turns 87 in January, so we wanted to make sure we had the right car at the right time. We don't have the luxury of three years down the road. I hope he makes it to 100, and in that case there could be a next generation GT350. But if there isn't, at least we've met our goal of fulfilling the destiny of Carroll Shelby. I think we've done that with this GT350."

Built To Race
The original '65 GT350 was designed as a race car; Shelby built street versions only because the SCCA said at least 100 had to be sold to the public to make the car legal for road-racing. Two of the first GT350s were competition models, known today as R-Models, with 5R001 winning the 1965 SCCA B-Production national championship with driver Jerry Titus, whose job as an editor at Sports Car Graphic provided needed exposure for Shelby's venture into Mustangs.

To pay homage to Titus, every 2011 GT350 will come with a set of decals in the trunk, including "Jerry Titus" driver decals for the roof and round "meatball" door decals with Titus numbers 36B and 61B.

With so much R-Model history, we had to ask if there could be a competition version of the 2011 GT350 in the future. "There could be," Amy Boylan told us. "To be honest, we've been putting 200 percent of our energy toward building this prototype. But it could be turned into an R-Model pretty fast. Remove the back seat, put in a roll bar and some harnesses, and you've got an R-Model."

We take a look at the brand new 2011 Ford Mustang Shelby GT500 Convertible and focus on the new SVT Performance Pack that it was given. Find out more inside! - 5.0 Mustang & Super Fords