The new model gets the 6.2L V8 as standard equipment. 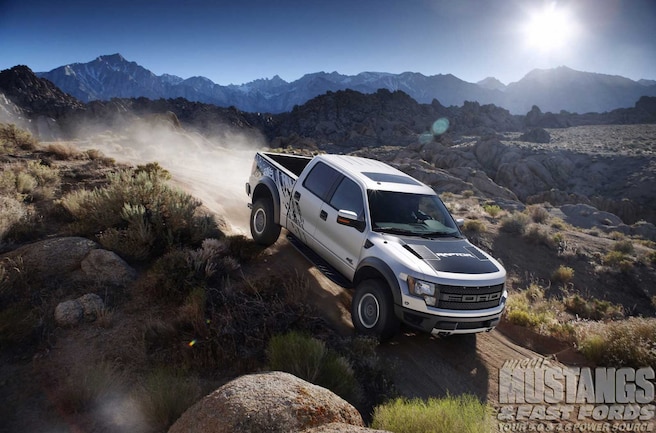 DEARBORN, Mich., Sept. 3, 2010 - The Ford F-150 SVT Raptor, already known for its unrivaled capability, is ensuring customers have even more power on demand for their off-road adventures by making the previously optional 6.2-liter V8 engine standard for 2011.

With 411 horsepower and 434 lb-ft of torque, the engine makes the F-150 SVT Raptor the most powerful half-ton pickup on the market, giving customers new levels of capability. Low-speed maneuvers, such as rock crawling, driving up a grade or accelerating through deep sand, require much less throttle input because of the engine's increased torque.

The exhaust for the 6.2-liter engine was uniquely tuned to deliver the performance-oriented, high-horsepower sound customers want. Additionally, a unique firing order gives the 6.2-liter a distinctive roar. The 6.2-liter V8 is similar to the engine used in the all-new 2011 Super Duty, but features unique tuning and a special cam profile to produce more horsepower and torque. It's similar to the race-prepped engine that powered Raptor R to a podium finish at the 41st Tecate SCORE Baja 1000 in 2008 and completed every mile of the grueling 2009 Best in the Desert series.

Testing In The Heat
The engine was put to the test in its element--the desert of Borrego Springs, Calif. Important factors such as engine cooling were tested on the 62-mile loop designed by Ford's Special Vehicle Team.

"We spent a lot of time developing our desert durability test so that it's very close to replicating the Baja 1000," said Kerry Baldori, global performance chief functional engineer. "Desert testing proved to be a very quick way to learn about the reliability of the truck, and it put another level of extreme loads on the engine that our normal durability testing doesn't need to cover." Engine cooling is key on Raptor--when the truck is in a desert environment, the hot weather and deep sand put a heavy load on the vehicle, and the engine has to exert maximum power to keep the truck powering on.

There also is more airflow through the radiator at low speeds, and a large and effective cooling system is required for this extreme environment. To improve airflow to the engine, grille openings were increased by 20 percent.

Features of the new 6.2-liter V8 engine include:

Core to the improvements is using a larger bore and shorter stroke. This approach to creating power has its roots in storied Ford racing engines from the past. The large bore (102 millimeters) allows for larger intake and exhaust valves for improved engine breathing, and the shorter stroke (95 millimeters) allows higher engine speed for increased horsepower. Still, peak horsepower is generated at a relatively modest 5,500 rpm. Piston-cooling jets squirt oil on the underside of the pistons to keep the piston crowns cool under extreme operating conditions.

Crankcase breathing also is improved to reduce windage losses and oil aeration levels at very high speeds. "That really helps get a robust lubrication system for the engine," Baldori said. "It allows us to endure a lot of time at extreme high speeds - and that's a must-have for customers."

Upgraded technology content, including a standard 4.2-inch LCD productivity screen and SelectShift Automatic(TM) transmission, keeps customers more in tune with their trucks, while a new graphic and color choice gives them more options.