Ford Announces the latest iteration of the iconic Mustang 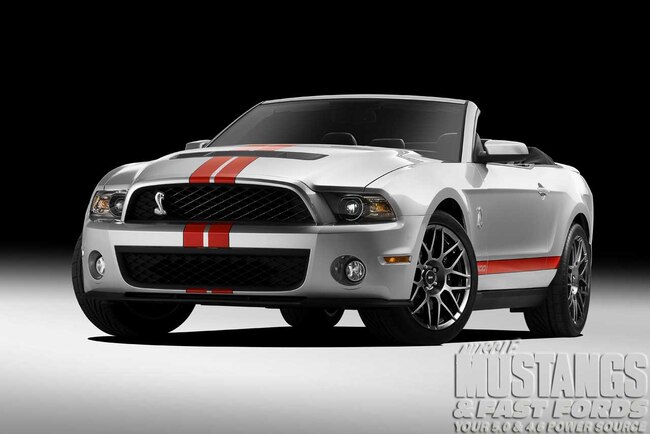 A new model year can produce a lot of excitement in the automobile industry. New advancements in design, safety, and efficiency create anticipation as the public waits for the latest and greatest. In 2010, Ford released a restyled Mustang, which improved on the already great looks of the S197 platform. Soon after, the Shelby GT500 was released, and the '10 Mustang fans had their power fix.

This week, Ford Motor Company unveiled the '11 Shelby GT500. Though it may not look like it on the outside, the new GT500 sports many technological enhancements and performance upgrades with the driver in mind.

The most significant change for the 2011 model year is the addition of the all-aluminum 5.4L supercharged modular engine. The new heart and soul of the GT500 produces 550 horsepower at 6,200 rpm and 510 lb-ft of torque at 4,250 rpm, with 80 percent of the peak torque available from 1,750 - 6,250 rpm. The 32-Valve aluminum engine is a direct descendent of the Ford GT supercar engine, and its connection to the GT is apparent as soon as you open the hood--a silver supercharger and blue valve covers bring the Ford GT style to the GT500.

The new aluminum engine ushers in many technological advancements over the previous iron block. The iron cylinder liners found in other production aluminum blocks have been replaced with Plasma Transferred Wire Arc or PTWA lining. The PTWA process uses air and electricity to create a plasma jet of 35,000 degrees Farenheit, which melts a steel wire, that is fed into a rotating spray gun. Using atomized air, the melted steel wire is blown onto the engine cylinder bores, which have been specially machined to receive the 150-micron thick coating. In the process of melting and applying the metal to the surface, the steel wire oxidizes, creating a composite consisting of both iron and iron oxide. The newly coated cylinder walls offer reduced wear and friction, and increased cooling efficiency over traditional iron sleeves, as well as a 8.5-pound weight reduction.

Another benefit of the new aluminum engine is the weight reduction. Checking in at 102 pounds less that the 2010 GT500's powerplant, the new engine sheds over 100 pounds from the nose allows for improved balance and handling.

Strength was also at the forefront of the design teams plans. Six-bold mains and structural webbing have been added to the block, giving it all the needed strength to support huge power. Improvements to the oil system have been made in the way of new oil drains and a redesigned windage tray.

All of these improvements also help the '11 GT500 shed its gas-guzzler tax--fuel economy comes in at 15 mpg city and 23 mpg highway.

Other additions under the hood include an intercooler with a 40-percent increased capacity to reduce heak soak and a larger 2.75-inch exhaust, which reduces backpreassure by 32-percent. This resulted in more power and a more aggressive exhaust note.

The engine isn't the only changes in store for 2011. The '11 GT500 now comes with Electric Power Assist Steering, or EPAS, which with reduction in weight gives the '11 GT500 sharper handling characteristics than the '10 model.

The '11 GT500 is now available with an optional SVT Performance Pack. The SVT Performance Pack starts with a revised suspension package. The front springs are 20.5-percent stiffer than the stock springs, and the rears check in at 9.5-percent stiffer. The front is 11mm lower than stock and the rear has been dropped 8mm. The dampers in all four corners have been tuned for optimizataion, and different sway bars have been added front and rear with the largest sway bar available for the platform.

New wheels and tires will also be available with the Performance Pack. Ford engineers have teamed up with Goodyear to co-develop the Eagle F1 SC G specifically for the GT500.

The '11 GT500 equipped with the SVT Performance Pack out performed the 2010 version by three-seconds a lap on a 2.38-mile test track, and 0-60 times and quarter-mile times have been improved dramatically.

The improvements Ford has made to the GT500 equal huge gains across the board. With these kinds of performance upgrades, we cant wait to get our hands on one. 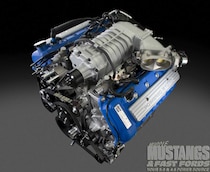 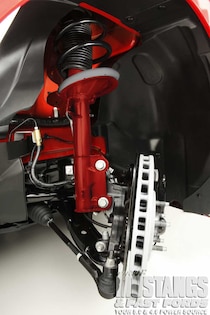 We take a look at the brand new 2011 Ford Mustang Shelby GT500 Convertible and focus on the new SVT Performance Pack that it was given. Find out more inside! - 5.0 Mustang & Super Fords