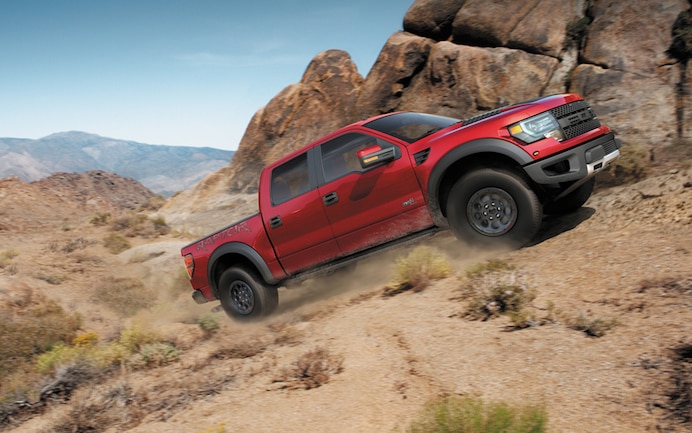 Ford has some new plans in store for its 2014 SVT Ford F-150 Raptor pickup, which will be going on sale this coming fall. Since its introduction in 2009 as a 2010 model, the SVT Raptor has become quite popular with the off-road truck crowd, thanks in part to its 6.2-liter V8 engine capable of 411 horsepower, 434 lb-ft of torque and other significant add-ons that set it apart from its F-150 siblings.

The brand new Raptor Special Edition for 2014 will feature the preexisting Luxury Package but with some sweet new features such as a Ruby Red Metallic paint job and side graphics for the exterior. Inside, you’ll find Brick Red seat bolsters sporting black inserts and honeycomb touches, as well as special accents for the door panels, console top finish panel, and center stack. Tuxedo Black Metallic paint will also be offered for the special Raptor package.

“Raptor owners are looking for a high-performing, uncompromising off-road pickup truck with the features and luxuries found in today’s premium trucks,” said Doug Scott, Ford truck group marketing manager in a statement announcing the special Raptor package. “We’ve continually moved Raptor forward in capability and design, and the 2014 Special Edition is the best Raptor yet.”

Available in both Crew cab and King cab configurations, sales for the SVT Raptor are already up an impressive 14% over last year, with five out of the six months bringing in record sales. Ford is planning to make small updates for the entire 2014 Raptor lineup, with the special edition model the most prominent addition.

There is no denying that the Raptor is lot of truck for your buck with all-terrain tires, internal triple-bypass FOX Racing Shox dampers, skid plates, standard Hill Descent Control, as well as a grille-mounted camera to help driver visibility when conquering off-road obstacles. A Torsen limited-slip differential helps the front wheels balance traction between the front wheels. Other features include a six-speed automatic transmission, 4:10 gears, beadlock-capable wheels, high-intensity discharge headlamps, SYNC with MyFord Touch, and other features that help make the Raptor capable, on-road or off.