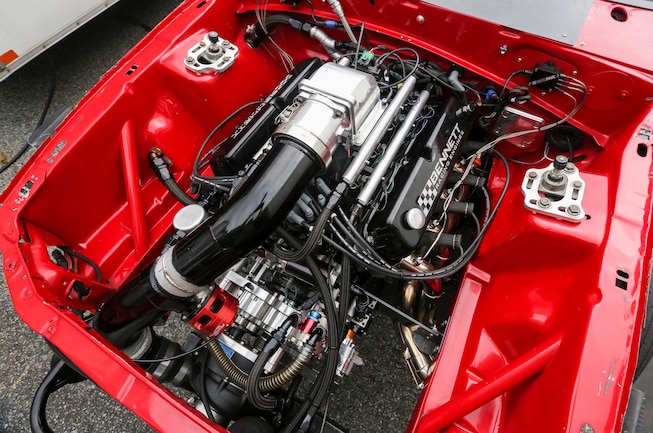 Over the past few years, Bennett Racing Engines worked with longtime customer and three-time NMCA champion Joel Greathouse to showcase the capabilities of its 400U small-block Ford package, in both turbocharged and supercharged versions. The Bowling Green resident competes in a 1990 Mustang LX coupe, sponsored and maintained by KBX Performance. He has captured three wins at the prestigious No Mercy/Lights Out events at South Georgia Motorsports Park, as well as nearly a dozen other event victories over a three-year span. First as a turbocharged combination, Greathouse has pushed the 400U to a best of 4.81 at 148 mph. As the rules shifted in Ultra Street, he swapped over to a ProCharger F-1A-94 and continued his winning ways and has run as quick as 4.71 at 150 mph in competition and 4.70 at 150 mph in testing. This winter, the shop spent considerable time testing various camshaft profiles to be ready for the race season, which unofficially kicks off in late January with the U.S. Street Nationals at Bradenton Motorsports Park. As a fleet of Bennett Racing Engines customers hit the track in 2018, the 400U is poised to be a front-runner in the Outlaw world as well as the sanctioned events of NMCA.

Bennett Racing Engines begins with a Dart Iron Eagle engine block, the bores are enlarged to 4.125-inch, and other machining is done to prepare it for a life in extreme heads-up racing. Given the rpm and power levels, a Callies billet-steel crankshaft was selected for the 400U. It offers a 3.750-inch throw to generate the 400-cid displacement. Bennett Racing Engines relies, almost exclusively, on Ross Pistons and a custom design was made for this combination. Connecting the pistons to the crankshaft is the job of GRP aluminum rods. A custom oil pan was designed for this engine package, complete with kick-out and internal baffles.

Due to the category rules, Bennett Racing Engines has selected Trick Flow High Port cylinder heads as the standard for the 400U. The heads feature a factory valve angle of 20 degrees, and the valves are arranged inline. There are penalties for canted valves and non-stock valve angles, making the Trick Flow aluminum heads an ideal selection. The ported heads flow close 400 cfm on the intake side. The valves are made from either titanium or Inconel, depending on the power-adder. Bennett Racing Engines continues to test various cam grinds to extract the most power from the 400-cid powerplant. The valvetrain is comprised of Jesel lifters, custom heavy-wall pushrods, and Jesel rocker arms, which ensure valvetrain stability at high rpm and under severe loads of boost.

Joel Greathouse currently relies on a ProCharger F-1A-94 supercharger, which is spun using a Component Drive System geardrive unit from Chris Alston Chassisworks. Pressurized Solutions handled the custom fabrication work to plumb the blower to the billet 105mm throttle-body. A ProCharger racing bypass valve helps relieve pressure when the throttle-body closes. Prior to running a supercharger, Greathouse utilized a Precision turbocharger with a 76mm impeller made from cast aluminum, per class rules. The turbine had a 96mm inducer, once again to appease the rule-makers. Pressurized Solutions utilized KBX Performance headers and built a custom cross-over and discharge pipe to complete the turbo system. There is no intercooler, as Greathouse runs methanol fuel.

Greathouse runs his 1990 Mustang LX on methanol, meaning the fuel system has to provide a serious volume of fuel to meet the supercharged engine's demands. It all starts with a cabledriven Weldon fuel pump that sucks Renegade methanol from a front-mounted fuel cell. It is delivered to four fuel rails via AN12 lines and feeds a total of 16 fuel injectors from Precision, each one capable of delivering 220 lb/hr of fuel. Crew chief Justin McChesney of KBX Performance relies on a BigStuff3 engine-management system and an MSD 7531 for timing map control, as well as an MSD 8 to fire off the spark under the intense cylinder pressures.