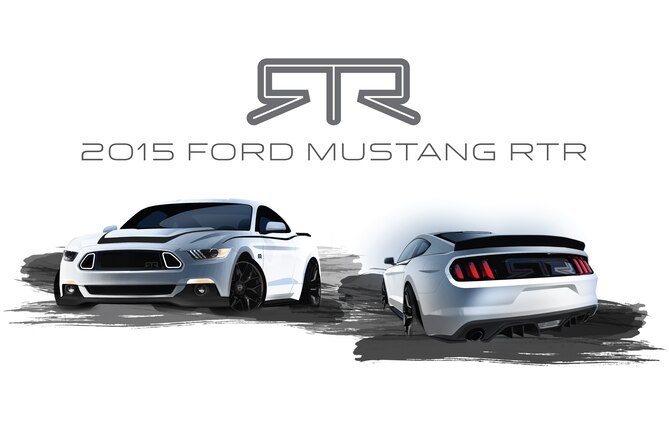 Vaughn Gittin Jr. may have made himself a household name (well, in Ford households at the least) with his drifting prowess and championship winning Mustang drifter, but he’s no slouch when it comes to serialized Mustang production either. His Mustang RTR (Ready to Rock) product line, which debuted with the freshly designed 2010 Mustang, has quickly gained a rabid following. The Mustang RTR is a well thought out package of visual, performance, and handling upgrades that make for a great daily driver, race car, or show car (or all three!) without having to smash your piggy bank into a million pieces.

Early next year the Mustang RTR brand will launch their all-new Spec 1 and Spec 2 serialized Mustangs on the new 2015 Mustang S550 chassis. Featuring the now-legendary5.0L Coyote V-8 and the all-new 2.3L EcoBoost, the Mustang RTR will enhance the production IRS, braking, performance, and looks with its trademark pieces. Front and rear fascia updates, wheels, graphics, and more are all part of the Mustang RTR branding and we can’t wait to get behind the wheel of one and see what Vaughn and his Mustang mad scientists have cooked up.

For 2015 the available Mustang RTR dealers will be increasing, allowing Mustang fans easier access to the Mustang RTR. “For the past couple years we have really focused on building relationships with the best dealers out there,” says Vaughn. “The dealers we have partnered with so far have been very happy with the RTR program we offer and the overall reception Mustang RTRs receive in their dealerships. Excitement is very high around this next generation Ford Mustang.” The serialized Mustang RTR, Spec 1 and Spec 2, will both be available starting January 2015 at select dealers. Mustang RTR will also be offering all RTR products for sale at that time for individuals with 2015 Mustangs that want to personalize their Mustang one piece at a time. The parts program will be available exclusively through www.mustangrtr.com and www.americanmuscle.com.