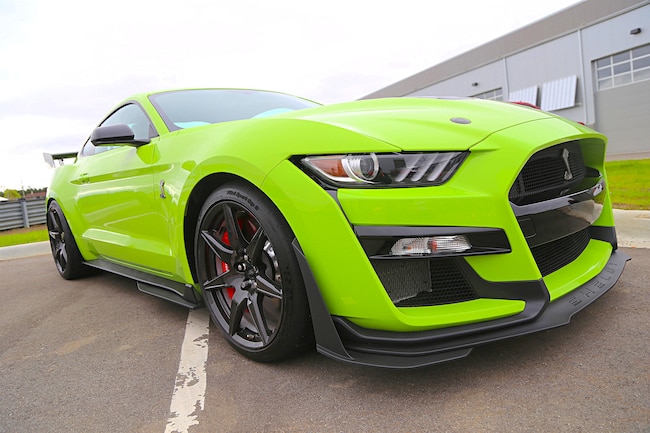 As the bus pulled into the M1 Concourse, there they were. Two scene-stealers overshadowed the rest of the pony cars in the corral. We were on hand to drive the 2019 Shelby GT350, but we couldn't take our eyes off the two 2020 Shelby GT500s parked alongside every other performance Mustang variant.

From the new High-Performance EcoBoost package to the street-stalking Bullitt, the collection of hardware was impressive. However, there is no Mustang more eagerly anticipated than the 700-plus-horsepower 2020 Shelby GT500. We couldn't help but scope out the top dog Ford Performance Mustang, and we didn't turn down the offer to take a look under the hood.

By now any blue-blooded Ford fan knows a 2.65-liter TVS-supercharged 5.2-liter V8 engine that carries an aggressive codename, Predator, provides the motivation for the next-gen GT500. Engineers took the 5.2-liter engine from the GT350 and fortified it for boost. It uses a traditional cross-plane crankshaft, a more robust block, boost-friendly cams, forged internals, and it is backed by a class-first Tremec dual-clutch transmission.

While we have seen the engine on a display stand, this was our first up-close-and-personal view of the Predator 5.2 in its native environment; under the hood of a real 2020 Shelby GT500. Since we always have a camera in hand, we quickly snapped shots the standout details of interest to the Mustang faithful.

As the hood lifted, it took a second for it to sink in. This Shelby does not have a prop rod. For the first time, there is a factory hood lift. And it is singular, as just one gas pressurized strut raises the hood after the release of the sleek hood pins.

Facilitated by a mount on the strut-tower brace, the hood lift raised the aggressively vented hood to reveal the 5.2-liter in all its glory, plus several interesting details not shown on the auto-show display engines, as these development machines appeared quite close to what will roll off the Flat Rock assembly line and on to dealer lots.

Of course, you are likely wondering about the official power output. Ford officials would only say that engineers are still working to deliver the most power available and they didn't want to keep releasing updated numbers. As such, that big reveal won't arrive until it is completely final, which will likely be when we finally get a chance to drive one.

For now, check out the photos for a closer look inside the Predator's lair.

This 2020 Shelby GT500 featured the Recaro leather-trimmed seats with Miko suede inserts. The seat accents are matched on the console and door panel inserts. The cabin looks great, but that dial shifter for the DCT will take some getting used to.
This example is upfit with the optional Carbon Fiber Track Package, which includes 20-inch carbon fiber wheels, an exposed carbon fiber GT4 track wing, and more.
The real excitement, of course, is under the hood. Obviously the intercooled TVS blower is the centerpiece of the engine compartment. However the single hood strut and pale cam covers jump out right away. Closer inspection reveals more significant details, including some unique uses of metallurgy.
For the track, the GT500 hood is aggressively vented to reduce front-end lift and aid in engine cooling. The vented hood, built from a lightweight composite sheet molding compound, features the largest opening ever included on a production Ford, measuring 28x31 inches. However, in daily use, such a massive vent would allow drenching of the 5.2-liter engine in rainy climes. As such, the underside of the hood features a removable rain tray that keeps out moisture and debris. It is built from what is described as "quiet aluminum" that is two layers of aluminum separated by a layer of sound dampening material. This keeps the tray from generating too much noise during a downpour, and when removed for track use it reduces front-end lift.
As with the previous GT500 engines, two-person teams on the Niche Line inside the Romeo Engine Plant will build these supercharged 5.2-liter beasts and adorn them with a stamped plaque featuring replicas of their signatures. All we know so far is that these boosted beauties will produce more than 700 horsepower. How much more is yet to be officially determined
Any Mustang built to perform on the track wears a structural brace joining the two strut towers to reduce chassis flex and ensure predictable suspension geometry. Naturally, the GT500 has one, but it is special. Built from magnesium, which is a third lighter than aluminum in its pure form; it is actually a K-brace, so named because it not only joins the strut towers, but ties them into the cowl at two points. Formed from a lightweight AE44 magnesium alloy containing rare earth elements it offers maximum stiffness with the ability to withstand extreme heat. Using magnesium also allowed engineers to create a more complex shape to fit around the intercooled supercharger manifold. It also serves as the lower mount for that hood lift strut.
Another interesting addition to the Predator engine compartment is, to our recollection, the first inclusion of a factory air/oil separator. It will separate oil vapor from the PCV system. Without the separator, that vapor can contaminate the combustion chamber and gum up the intercooler core. It is definitely a wise inclusion that had long been an end-user upgrade, just as hood-lift systems have previously been left to the aftermarket. The latter you can see mounts to the K-brace right above the separator.
Obviously keeping inlet temps under control was a mission for engineers, as the GT500 features a unique sealed air box housing a conical filter. Unlike the version on the GT350 that seals to the hood, this one has a dedicated lid to lock out hot underhood air. It breathes deep from the inner fender. Next to the air box is a compact intercooler coolant reservoir.
Since it packs high-speed potential, keeping the GT500 hood secure is paramount. This slick hood pin, manufactured by Watson Engineering, is locked and unlocked by push buttons on the hood. Integrating these pins required slightly redesigning the carbon-fiber composite grille opening reinforcement that was originally designed for the GT350 program.