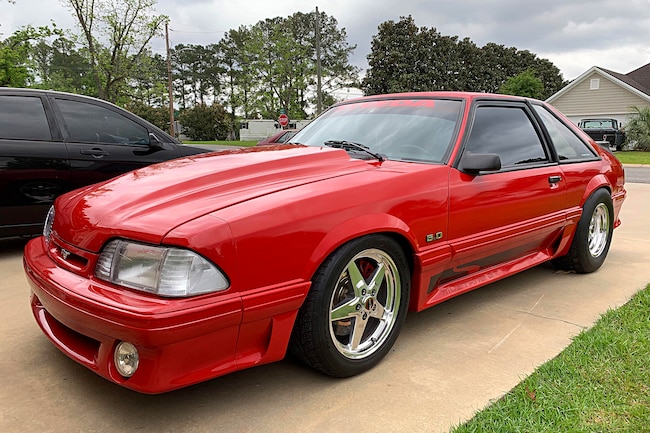 Working at Steeda Autosports has its advantages. First, it's one of the more identifiable Mustang parts suppliers. Second, the company is just eclipsed 30 years in business, so you know the company's stable. Third, the parts and technology you're exposed to has to rub off on you and hopefully your Mustang, as well.

Matt Henschke takes full advantage of the technology at hand with his 1991 Mustang GT. His Fox boasts a 349ci combination featuring a Ford Performance Boss block, a D.S.S. rotating assembly, a Trick Flow top-end, an F303 cam, ID1000 injectors, Fragola fuel lines, a Magnafuel pump, Aeromotive fuel rails, and a Hellion Power Systems single turbo kit with a Precision 67mm ball-bearing unit. "We made a 3-inch cold side for it here at Steeda with piping from our Focus ST kits," Matt says.

The unique aspect of Matt's Fox is that it uses a 1997 Explorer ECU, coil packs, cam sync and crank sensor, and front accessories and brackets. That means Matt is able to take advantage of OBD-2 accessibility and diagnostics. Plus, it makes life a little easier on tuner James Gordon from Tuning by James. Other support equipment includes a QA1 K-member, a Tremec TKO 600 transmission, Cobra brakes and steering rack, and of course, a laundry list of Steeda suspension parts.

Matt's GT previously made 630 horsepower at the wheels with 11 pounds of boost at just 4,700 rpm, but at that time he was having wastegate issues. He's in the process of getting back on the dyno soon with E85 in the tank and 15 pounds of boost.