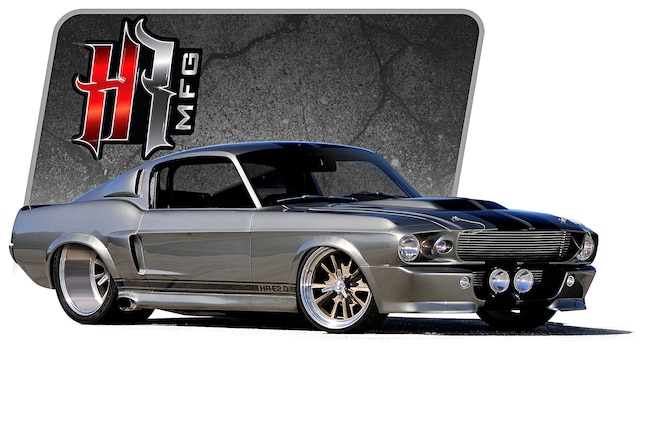 The movie Gone in 60 Seconds (the one with Nicolas Cage and the gray-and-black 1967/1968 Eleanor Mustang, not the Toby Halicki flick from 1974) was made in 2000, almost 20 years ago. In the two decades since the movie came out, the Mustang world has been inundated with Eleanor clones both good and bad, but now the world is about to have a series of turn-key Eleanor style Mustangs that are similar looking but completely different visually and mechanically.

HR MFG and High Rollers & Hot Rods have teamed up to build Gone In 60 Seconds 20th Anniversary Tribute cars, a modern interpretation of how the car would be if the movie and car were done today. The first step was to update the look of the car by keeping a distinct Eleanor vibe but changing its proportions by extending the wheel wells and shortening the car overall, plus a bunch of other subtle mods including massive 24x15-inch rear Shelby-style wheels (20x8.5 in front).

The body construction is also completely new to the Mustang world. HR MFG has teamed up with Ron Hentschel of Lone Star Brothers/PG Customs (who we worked with on last summer's Week To Wicked 1967 fastback conversion) will build the body "skeleton" with Golden Star sheet metal over which a complete fiberglass body shell will be dropped and glued into place with OE-type bonding material. Ron McDonald of HR MFG said the 'glass body is almost Funny Car-like, meaning it's a one-piece fiberglass body with flush-mount glass. The body will use steel doors and fiberglass hood and decklid.

The chassis and suspension are being built by MRC Fabrication using mandrel-bent 2x4 frame rails and a 4-link with Watts link in the rear, and tubular control arms with billet spindles in front with trick Hydroshox (from Mittler Brothers Machine & Tool, www.mittlerbros.com) that allow you to raise or lower the car like air bags but with true coil-over shock performance. There will be both fully tubbed and mini-tubbed rear suspension setups for those that don't want the enormous pro street rubber out back.

The engine in the prototype is also worthy of attention—a Nelson Racing Engines (http://www.nelsonracingengines.com/) 428ci Windsor-based small-block with twin turbos that makes 1,000 hp on 93 octane pump gas, and 1,300 hp on the good stuff.

McDonald said, "We currently have the R&D car ready to pull molds from and to start building the first production car, which will not only be a modern rendition to the famed movie car but will be the first actual production body available.

They're looking to debut the first car at the 2020 Barrett-Jackson Scottsdale automotive auction, and we'll be following its progress frequently right here on Mustang-360.com.

This is the custom steel body that the fiberglass body molds will be pulled from. The production car will utilize an OE-style steel skeleton with a bonded-on fiberglass outer shell.
The rear wheelwells will be offered in mini-tub or fully tubbed versions.
The suspension will be from MRC Fabrications.
This Eleanor will not be a slowpoke thanks to 1,00 to 1,300 horsepower from a Nelson twin-turbo 428ci small-block.
As an idea of this car's build style, check out the MRC billet aluminum fuel tank!