Tania Mallet: the Coolest Bond Girl of Them All?

Tania Mallet: the Coolest Bond Girl of Them All? 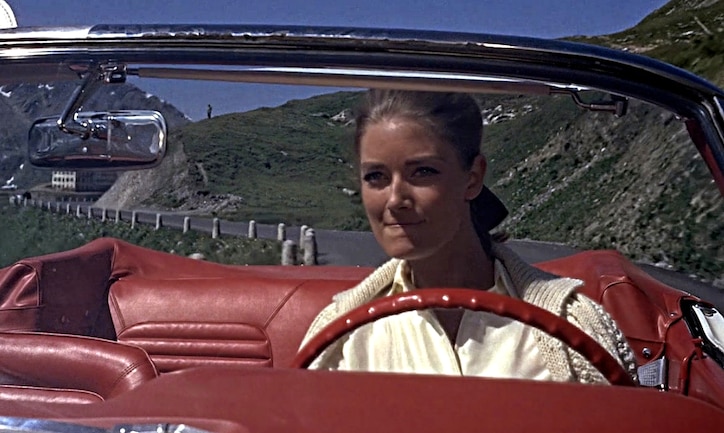 The year was 1964 and The Beatles had invaded America (in February) and Goldfinger, quite possibly the film that cemented the James Bond franchise, opened in U.S. theaters on December 22, 1964. It was a year when everything British was fab. I know first-hand as the following summer, with the film in wide release, three months shy of my 11th birthday, I saw Goldfinger for the first time in a theater. It was, looking back, a major milestone in my life.

At the time I didn’t get all the double entendres, like Pussy Galore, the name of Goldfinger’s personal pilot. For me it was the cars, James Bond’s Aston Martin DB-5, and Tilly Masterson’s pre-production Ford Mustang convertible. Oh, and the strikingly beautiful Tania Mallet. And for the past 54 years, I’ve had a crush on Tania Mallet, who in Goldfinger, who played the ill-fated Tilly Masterson.

Over the years I’ve become something of a Bond film fanatic. My four favorites are Goldfinger (because of the impact on my life as it turned out), From Russia with Love (because it was among the best scripted films in the entire series), On Her Majesty's Secret Service (the most underrated of all Bond films plus it starred the incomparable Diana Rigg from The Avengers fame), and Goldeneye (for reasons I’ll explain later). The Goldfinger UK poster, for a UK theatrical reissue, is one of the few instances where Tania Mallet is listed in the credits of all the posters issued worldwide over the past 54 years.

Many Mustang fans and enthusiasts have wondered what happened to the Masterson’s Mustang ragtop? There is no definitive answer but my friend Wolfgang Kohrn, the webmaster of ponysite.de, knows as much as anyone does. Here’s what he knows.

“The $3,000,000 budget ($24,000,000 today, not enough to finance most original films on Netflix) apparently allowed the producers to acquire for filming some interesting cars, the DB5, the Mustang, Goldfinger’s Bentley, and a number of cars provided by Ford (several Lincoln Continental four-door sedans, a Ford Country Squire station wagon, a Ford Ranchero, and a Ford Thunderbird convertible assigned to CIA operative Felix Leiter), says Kohrn. It’s a little known fact that Henry Ford II negotiated a special deal with the Bond movie designer. Over 150 Fords made it into Bond movies actually.

Getting back to Ms. Mallet, she participated in one of the most significant (and most beautifully filmed) scenes in the entire series, through the Furka Pass outside of Andermatt, Switzerland. (These four minutes of film history can be viewed on YouTube.) At the 34’58” mark of the film, Masterson’s Mustang makes its first appearance and passes Sean Connery’s DB5. Kohrn notes. “Ken Adams, Goldfinger’s production designer, was known for his interests in sports cars and wanted a new Mustang in the film. (Ford apparently was approached to provide a golden Mustang, possibly the not-yet-available fastback model for the film) and settled for one of the few Mustangs available in Europe at the time.”

“To get the Mustang on location in Switzerland was left to Ford of Europe racing manager Alan Mann. He told me that he was approached by Ford of Europe Public Affairs boss, the legendary Walter Hayes. The producers had asked him for some help on the stunt scenes and requested a Mustang convertible for a female actress, who turned out to be Ms. Mallet. As Alan recalled, ‘we had a convertible around and at least it was easy to locate it for the movie.’”

Over the years Kohrn has noted that there has been speculation that the pre-production 1964 ½ convertible was Phoenician Yellow. But close examination of the Blu-Ray disc would seem to indicate that it was Wimbledon White. This was the first time that the Mustang appeared in the Bond series and must to have been among its first placement in any feature film.

Kohrn continues, “Alan Mann did not remember the VIN nor what happened to the car later. He thinks it might be scrapped, but we all know, movie cars apparently pop up here and there. John Grant from Alan Mann Racing remembered the car very clearly. He told me a few years back in his interview with me an interesting bit of trivia about the actual filming at the Furka Pass, which occurred on July 11, 1964. ‘Scottish race car driver Andrew Cowan drove the car in some scenes and had to wear a wig. That was quite funny to see for his Alan Mann team mates, as he was quite tall.’ They must to have had a lot of fun being there, being part of such a historic film scene.”

Kohrn also notes that there have been rumors, unverified at this time, that the Goldfinger Mustang survived, was given by Ford to the film’s producers, and subsequently given to an employee. But without verifying the VIN against Ford records, there is no way to verify this.

Now back to Ms. Mallet. Her film career was short-lived as the producers paid her just £150 for her part in Goldfinger at a time when she could command £2,000 as a week as a model. It’s no wonder that she resumed her modeling career after Goldfinger and remained a successful model throughout the 1960s.

I got close to meeting Ms. Mallet, starting in 2004. Previously, being the Bond geek I am, I bungee jumped over 700 feet, off of the Goldeneye Dam in Southern Switzerland, also known as the Verzasca Dam. I tried for many years to convince Aston Martin to let me drive a Vanquish from London to Locarno, Switzerland, site of the Goldeneye/ Verzasca Dam, and visit a number of actual Bond filming locations in Europe along the way. (It remains one of the few items remaining my personal bucket list.) Unfortunately, I could never make it happen, even after reaching out and making contact with Ms. Mallet.

Ultimately, Octane magazine took my proposal and ran with it, returning Ms. Mallet to Switzerland, behind the wheel of a classic Ford Mustang convertible in 2008. Wolfgang had a part in bringing it together. While disappointed that I didn’t produce the story, I had to say that Ms. Mallet had aged gracefully and looked great behind the wheel of a Mustang convertible for the second time, on the Furka Pass.

When I learned of her passing I felt a true sense of loss. I also wondered just how many young boys, and I was just a boy at the time, that Tania Mallet had a similar effect on? I’m betting that that number is in the millions. To the beautiful Tania Mallet, forever young.

The additional gallery images below include publicity shots taken by the producer, United Artists/EON Productions in 1964 during the filming of Goldfinger.