SSP Mustangs Wow the Crowd at Ponies in the Smokies 2019 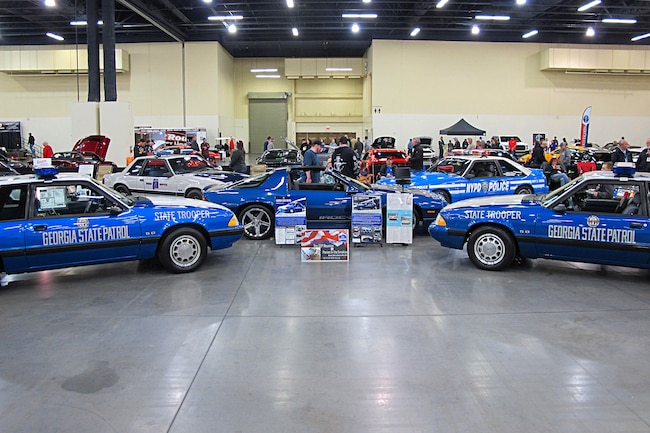 The 2019 Ponies in the Smokies (PITS) [www.poniesinthesmokies.com] provided an indoor display of past SSP Fox Mustangs for enthusiasts to enjoy, even placing them around a “bad guy” Camaro Z28 from the same era for effect. It was a great display with some passionate owners at the ready to take photos with kids of all ages, and even turn on the lights and sirens for a “code 3” display to the tune of Bad Boys from Inner Circle (made famous by the Fox TV show Cops). However, we’re getting a bit ahead of ourselves here, as the 2019 display was born from some interesting actions at PITS 2018.

Last year SSP owner Mike Medley and his friend, retired Georgia State Trooper Sgt. Ricky Wilcox, decided to bring their SSP Mustangs to the 2018 show. Medley owns a 1992 Georgia State Patrol (GSP) SSP Mustang. Wilcox has the actual 1989 GSP SSP Mustang he was assigned when he was on patrol as a state trooper! “We arrived that Thursday afternoon and later on took our cars to the shine run party at Quaker Steak and Lube where they were a huge hit, we just didn’t know how huge. So, the next morning, the first day of the show, we pulled up ready to be outside and Travis Smith (one of the PITS organizers) quickly moved us inside for display in the middle of the convention center because the night before all the staff decided the we just had to be in there,” Medley tells us of how the SSP display started in 2018.

The display got so much attention that fellow PITS organizer Jeff Southard asked the pair if they could put the word out to SSP owners for a larger group of SSP Mustangs for the 2019 show. This display would be a “teaser” for an SSP reunion display for the 2020 PITS show Southward told them. Medley eagerly accepted the challenge and got to work gathering up a group of SSP Mustangs from various agencies. His first call was to Bobby Edwards, a local friend who is well known in SSP circles and has restored several GSP SSP Mustangs, among other agencies. Together Medley and Edwards are working on the 2020 SSP reunion project. “For the 2020 reunion we plan to have SSPs on display showcasing the many paths they went after being sold at auction. We will have fully restored to in service condition, barn find (left as is from when it was sold at auction), civilian restored (left in original colors or repainted and driven on occasion or daily but not equipped), and race (full on drag car or road race set up). As of now we already have well over 60 applications for the display that myself and Bobby will go thru along with the show staff and decide which ones get to be displayed inside and which ones will be carried over to a tent set up for outside display,” Medley explained.