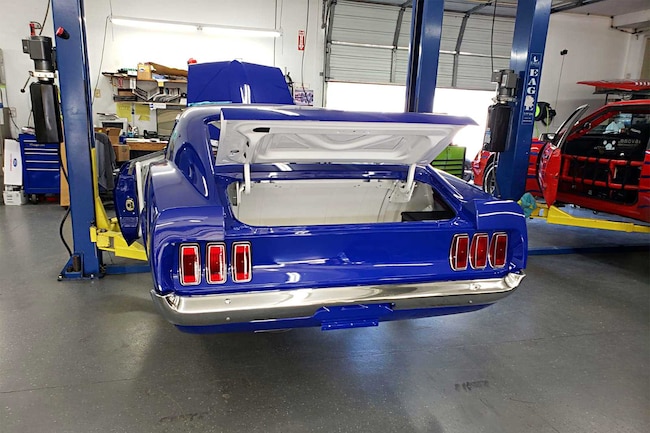 As the Mustang world is gearing up for the 55 Years of Mustang event in Charlotte, NC next week, we got some photos of a special tribute car that is getting the finishing touches in order to debut at the event. Innovative Performance Technologies based in Charlotte, is building a 1969 Mustang fastback as a tribute to the ’69 Trans Am racer that was driven by Dan Gurney, Sam Posey, and Peter Revson that season.

That car, chassis 9F02M148628, was one of three cars delivered to the Shelby team from Kar Kraft for the ’69 season, as a body-in-white to be completed by Shelby American. It had moderate success that year before being sold to the Bud Moore team as a backup car, where it was driven by George Follmer and Parnelli Jones.

Crimson Sanders at Innovative did most of the work on the car with help from Rod and Tony Hancock at Petty’s Garage, and there is a TV build program scheduled with Motorhead Garage, after which it will be put on display at the Mustang Museum in Charlotte. But before that, the car will be at the Mustang 55th show where it will do hot laps of Charlotte’s NASCAR roval (oval and inner road course) the week of April 16-20