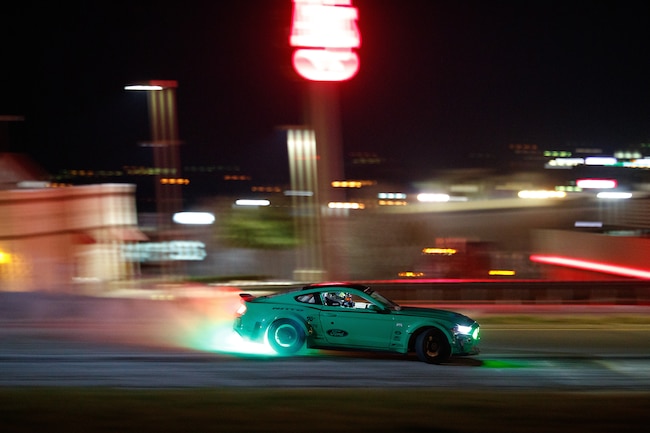 Some of us have different goals in life than most people. For many outside the Mustang world, it’s to have financial freedom, a couple of kids, and a nice home; even with a pool, perhaps. Within the Mustang community our goals are to have a fast Mustang, win a few races, win a car show or two, and have some fun along the way.

Having fun is a way of life for professional drift racer Vaughn Gittin Jr., but he has goals, as well. He accomplished one of them last year by drifting the entire Nürburgring, but he wasn’t finished. As Gittin puts it, “Entering a cloverleaf at maximum attack is something I've always wanted to do! There was nothing like the sound of the 5.0 revving out under the overpass portion as it echoed every which way! It was just the right amount of sketchiness and fun together... and quite a bit more challenging than I had expected linking it all together. And doing it at night made it that much more intense."

To cross off another bucket list item, and with St. Patrick’s Day coming up, Gittin climbed back behind the wheel of his 900hp Ford Mustang RTR Spec 5-D that he used to drift the Nürburgring, and headed to Texas. The car shares the same DNA as the Mustang RTR Series 1 Powered by Ford Performance available at Ford dealers starting in April. The Lake Worth Police and Fire Departments, along with the Naval Air Station Ft. Worth JRB, made it possible for Gittin to make it happen, and remember kids, don’t try this at home.