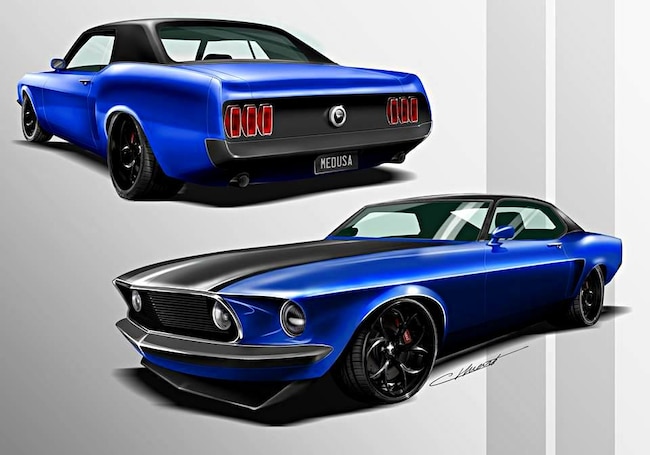 If you’re a fan of Car TV, the name Ray McClelland is probably familiar, as a host of Motor City Masters and the owner of Full Throttle Kustomz in Fillmore, CA. Ray is doing some tuning work to our GEN3 Coyote-powered Week To Wicked 1967 fastback, and while we were at the shop he told us about his latest project.

Medusa is a 1969 Mustang coupe being built as a tribute to his uncle, who he was very close to but died when Ray was 11 years old. The car ended up at his other uncle’s house in Pennsylvania with 70,000 miles on it, and it sat for years, slowly deteriorating in the north east weather. Ray talked his uncle out of the car and brought it home to Southern California and is currently building it to look like his uncle would have had it, but with a serious drivetrain under the skin.

He said, “My uncle was an enthusiast but didn’t really work on cars, so in tribute to him I want to keep the looks as stock as possible but make all the ‘hidden stuff’ like the engine and chassis all about me.”

That “hidden” stuff starts with one of Bodie Stroud’s complete BSI Mustang chassis that can accommodate monster rubber in order to handle the drivetrain that Ray is planning. After first considering putting a 750hp LS engine it (the horror!) he’s looking at building a 5.4 or, better yet, a 5.8 with turbos and back it with Ford’s 10-speed automatic. “I’m not glued to any particular drivetrain but whatever it is, it’ll have twin turbos on it. It’s not going to be a race car, more of a cross-country cruiser that I can pull into a dyno day or something and throw down some big numbers.”

If he indeed does a 10-speed swap, Mustang-360.com will bring you all the nitty gritty details. Currently, the car is at BSI getting the chassis and Rich Evans of Vintage Flatz and Huntington Beach Body Works (and also a host of Motor City Masters) is handling the bodywork and paint. The car was originally green with a vinyl top, but Ray is painting it blue with flat black accents…and keeping the vinyl top for a sleeper attitude.