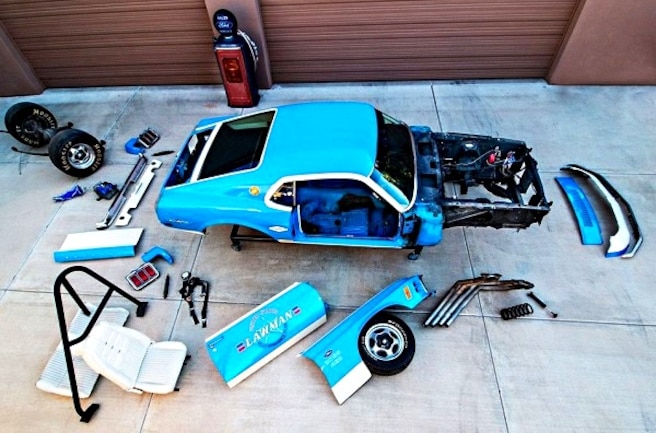 You have read about the Lawman on this site several times in the recent past. What is considered by some to be the most important Boss 429 of them all, the Lawman is currently owned by professional athlete, former NFL football player, former pro-wrestler, actor, TV Host, and an hardcore car guy Bill Goldberg, who has tapped Marcus Anghel of Anghel Restorations in Scottsdale, AZ to restore the car.

If you haven’t heard of it, the Lawman was a special demonstration 1970 Mustang Boss 429 meant for military exhibitions. As Marcus said, “In 1970 Ford put together a military performance tour for American servicemen stationed overseas in Pacific and European bases showcasing safety seminars, driving clinics, and performance exhibitions bringing the latest in automotive activities from back home. Ford shipped a pool of Mustangs specially built for this purpose, with all of the activities headed up by the principal driver of the team, Al Eckstrand. Al was a highly respected drag racer who had won nearly every stock car drag racing title in the previous seven years. He had a background in law so each car carried the ‘Lawman’ name."

Mustang Monthly attended Anghel Restorations’ Open House during the Barrett-Jackson Scottsdale auction this past January, where the Lawman was blown apart and mounted on a rotisserie getting ready for its restoration. Speaking with Bob Ashton of the Muscle Car and Corvette Nationals (MCACN) the challenge was thrown down to have the car debut at this year’s MCACN show in November, and Marcus accepted.

Ashton said, “Marcus has participated in the MCACN show with some truly remarkable Mustangs and Shelbys over the years. He also is a member of our Judging team, as he is an acknowledged authority of these cars, and that is why Bill Goldberg chose him to handle the restoration. This car is truly a one off, and being as historically significant as it is, deserves to be restored properly. In Bill's own word, ‘This car represents a lot of things to a lot of people.’ That is certainly an understatement! We are truly honored to be chosen as the place to spotlight this car and the history it represents and to be able to continue its legacy. Yes...the cars bring us together, but it truly is the stories, the memories and the people that are involved that make it what it is.”

The Muscle Car and Corvette Nationals will take place Saturday, November 23, from 9:00 am to 8:00 pm and Sunday, November 24, from 9:00 am to 5:00 pm. This car will be officially unveiled Saturday morning, shortly after opening. For more information on MCACN go to www.mcacn.com and to learn more about the Lawman and its ongoing restoration, check out lawmanmustang.com.